Impeachment Vote Is The Democrats’ Attempt At Obstruction of Justice

It was announced yesterday evening by the Democrat-led House of Representatives that the official vote to begin the impeachment of President Donald Trump will be held this coming Thursday. Appropriately, that day (Halloween) is the Democrat’s favorite Holiday, next to Tax Day, based on their penchant for fear mongering the electorate into voting for them.

After the unconstitutional way that House Democrat Leadership announced that impeachment would begin last month, as well as the secret hearings that deprived President Trump of any due process, it is tempting to call it a victory for the way that those in the GOP and the few voices in the media who have called out the process that has flown in the face of the Constitution and past precedent.

But I believe that is not the reason why the Democrats have decided to call this vote. I believe the motivation to move ahead with a House vote on impeachment was prompted by the news last Thursday evening that the investigation led by Attorney General William Barr and Prosecutor John Durham into the origins of the Russia collusion hoax is now a criminal investigation. (Gateway Pundit)

That news is the Deep State’s worst nightmare.

Judging by the way the unofficial DNC stenographers in the Corrupt Media, and several elected Democrats, are attacking this news; it is obvious that they are upping the ante on impeachment because they want to discredit any findings or criminal prosecutions that may come out of the Barr/Durham probe, claiming the DOJ and the AG have been “weaponized” by the Trump Administration.

Well, I’m no lawyer or legal expert, but to me, their attacks on the Barr/Durham investigation smell like obstruction of justice. Because in doing so, aren't these Grand Inquisitors in the Democrat Party and their Corrupt Media allies are acting the same way they accused President Trump of during the Mueller investigation.

Why? Because for all their accusations, from Hillary Rotten Clinton on down, there has been no evidence of Russia collusion with President Trump’s campaign. But, there has been plenty of evidence to connect the DNC and Clinton campaign colluding with Russia, as those independent of the Corrupt Media have illustrated over the last three years.

But then there is also the issue that Nancy Pelosi and Little Adam Schitt used to launch their faux impeachment inquiry: Ukraine and supposed “quid pro quo” from President Trump. The Biden connection is only one element, but not the only one. We saw in the transcript released by President Trump that there is another element to the phone call, when he asks the incoming President of the Ukraine about Crowdstrike, which was the outfit hired by the DNC to look into their computer system hack in 2016. 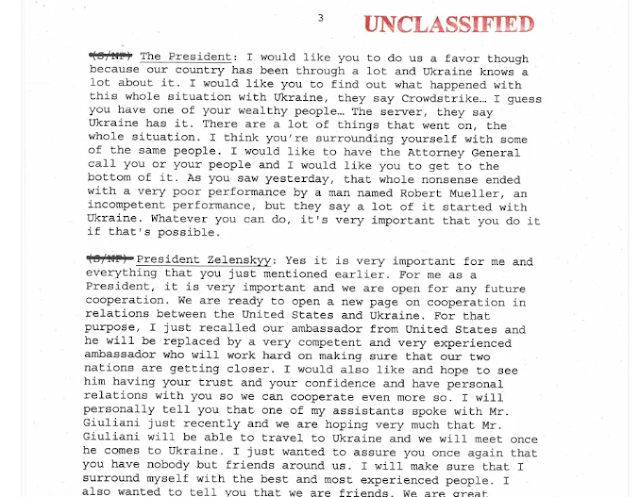 
But CrowdStrike is alleged to have gotten something big wrong about Ukraine. CrowdStrike accused Russia of hacking a Ukrainian artillery app resulting in heavy losses, even though Ukraine has no incentive to help Russia, which is attacking them. Ukraine said it never happened. And yet CrowdStrike was asserting that Russia hacked a Ukrainian artillery app. How do I know this? Well, Andy McCarthy’s written about this in his book Ball of Collusion. Here’s the short little passage here that’s relevant.

“CrowdStrike widely believed to have been wrong in a controversial 2016 judgment when it claimed that Russia hacked a Ukrainian artillery app resulting in heavy losses of howitzers in combat against separatists used by Moscow.” That’s a pretty big thing to be wrong about, and the only reason to point it out is, okay, if they’re wrong about that, what if the Democratic National Committee server was not hacked?

Ukraine is also linked in the Russia Collusion conspiracy, as this Politico story from 2017 noted, I’m sure by accident. 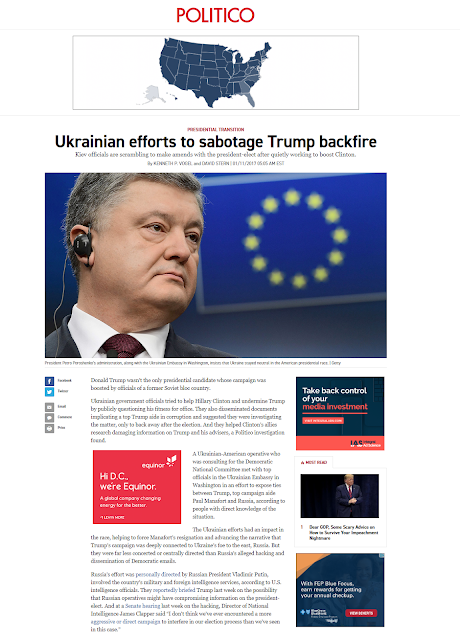 Ukrainian government officials tried to help Hillary Clinton and undermine Trump by publicly questioning his fitness for office. They also disseminated documents implicating a top Trump aide in corruption and suggested they were investigating the matter, only to back away after the election. And they helped Clinton’s allies research damaging information on Trump and his advisers, a Politico investigation found.

A Ukrainian-American operative who was consulting for the Democratic National Committee met with top officials in the Ukrainian Embassy in Washington in an effort to expose ties between Trump, top campaign aide Paul Manafort and Russia, according to people with direct knowledge of the situation.

The Ukrainian efforts had an impact in the race, helping to force Manafort’s resignation and advancing the narrative that Trump’s campaign was deeply connected to Ukraine’s foe to the east, Russia. But they were far less concerted or centrally directed than Russia’s alleged hacking and dissemination of Democratic emails.

Back in April, John Solomon wrote the following about Ukraine:


As Donald Trump began his meteoric rise to the presidency, the Obama White House summoned Ukrainian authorities to Washington to coordinate ongoing anti-corruption efforts inside Russia’s most critical neighbor.

The agenda suggested the purpose was training and coordination. But Ukrainian participants said it didn’t take long — during the meetings and afterward — to realize the Americans’ objectives included two politically hot investigations: one that touched Vice President Joe Biden’s family and one that involved a lobbying firm linked closely to then-candidate Trump.

U.S. officials “kept talking about how important it was that all of our anti-corruption efforts be united,” said Andrii Telizhenko, then a political officer in the Ukrainian Embassy in Washington tasked with organizing the meeting.

Telizhenko, who no longer works for the Ukrainian Embassy, said U.S. officials volunteered during the meetings — one of which was held in the White House’s Old Executive Office Building — that they had an interest in reviving a closed investigation into payments to U.S. figures from Ukraine’s Russia-backed Party of Regions.

That 2014 investigation was led by the FBI and focused heavily on GOP lobbyist Paul Manafort, whose firm long had been tied to Trump through his partner and Trump pal, Roger Stone.

Agents interviewed Manafort in 2014 about whether he received undeclared payments from the party of ousted Ukrainian President Viktor Yanukovych, an ally of Russia’s Vladimir Putin, and whether he engaged in improper foreign lobbying.
The FBI shut down the case without charging Manafort.

Lee Smith, who has just written a book on the whole Russia collusion narrative “The Plot Against the President: The True Story of How Congressman Devin Nunes Uncovered the Biggest Political Scandal in U.S. History,”  wrote this at Real Clear politics.


The Ukraine story starts no later than March 2016, when Democratic Party operative and Ukrainian-American activist Alexandra Chalupa approached the Ukrainian Embassy in Washington for information on the Trump campaign.

As John Solomon of The Hill newspaper wrote in May, Chalupa asked Ukrainian diplomats for “evidence that Trump, his organization and [campaign manager Paul] Manafort were Russian assets, working to hurt the U.S. and working with Putin against the U.S. interests.”

Chalupa emailed Democratic National Committee officials that she was briefing U.S. media on Manafort’s work in Ukraine. One of the journalists was Michael Isikoff of Yahoo News, who would later publish one of the key stories advancing the collusion narrative.

Ukraine’s ambassador to Washington told Solomon that Chalupa wanted to approach a member of Congress to initiate hearings on Manafort or arrange for Ukrainian President Petro Poroshenko to comment on Manafort’s alleged Kremlin ties during a visit to Washington.

Keep that in mind when Democrats and their media allies routinely suggest it is treasonous to seek foreign aid during an election.

As Chalupa was pursuing these channels, the Clinton campaign stepped up its efforts to find foreign dirt on Trump by hiring the Washington, D.C., firm Fusion GPS that March to compile and distribute opposition research on Trump. One of the company’s co-founders, Glenn Simpson, was a former Wall Street Journal reporter who had written several articles about Manafort’s work for former Ukrainian President Viktor Yanukovych.

Read the whole article, it is very detailed.

Even more interesting is this from former CIA agent Larry Johnson. As a background, Johnson (a former Hillary supporter) used to run a blog NoQuarterUSA and was a defender of Valerie Plame when her name was “leaked” back during the Bush years. I read his site from time to time, though I didn't agree sometimes with his assertions, he still made interesting points. He shut down his blog in March 2017 after coming under attack for publishing his belief that Trump’s campaign was spied on, which he explained in this other post.

This is why Pelosi, Schitt, their unofficial stenographers in the Corrupt Media are engaging in an obstruction of justice in the Barr / Durham probe. Because it threatens to expose the whole lot of them: members of the Corrupt Media, the DNC, the Clinton Campaign, and the Obama Regime, up to and, I believe, including Obama.

And in the minds of the Democrats and the Corrupt Media, all those people and their crimes must be protected by any means necessary, even if it means destroying the fundamentals of rule of law in our Constitution, and any remaining kernels of faith we as citizens might have in our government.
Posted by MaroonedinMarin at 2:33 PM No comments: