Those of us who were alive 18 years ago yesterday will never forget where we were the moment we heard of the terrorist attacks in New York, the Pentagon, and the heroes of United 93, who sacrificed their lives to prevent the US Capitol or White House from being destroyed.

I’ve done that in prior years; I won’t do that this year for brevity sake.

Two days ago, on 9/10, after reflecting on so much of what has been happening in our nation the last few weeks, as well as the last 18 years, I had posted the following on Twitter, bemoaning what has become of America. 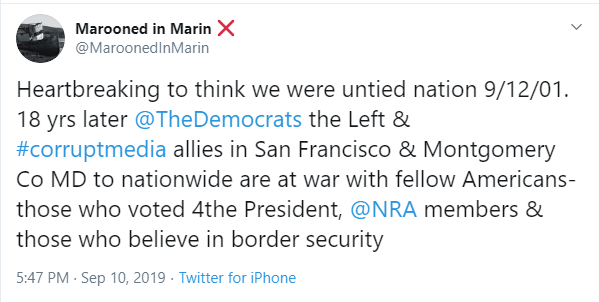 I did get this one snarky response.

I don’t apologize for my Tweet of 9/10, because what I saw so much of yesterday, today, and the previous years leading up to now proved me to be right.

The New York Slimes remembered how their city was attacked 18 years ago this way. 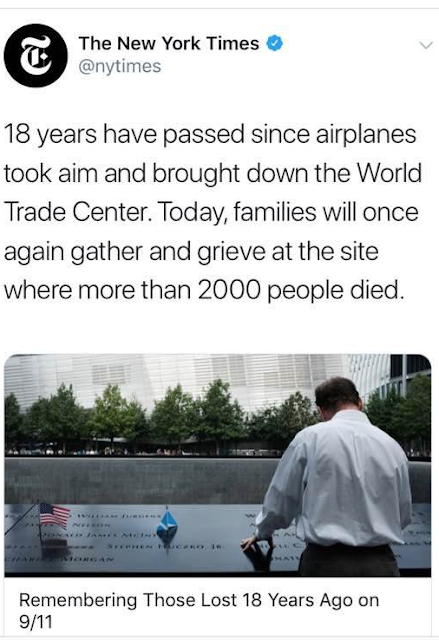 Then, they removed and edited it, but still had their heads in the sand.

CNN, another one of the corrupt media outlets, used this sacred day to bash…white people.

We woke up, hoping the day before was just a bad dream, but the news showed us otherwise.

We were one nation.

We didn’t look at our differences or what divided us. We were all Americans. One Nation United. We were all in this together.

Oh sure, we had a few nuts in various parts of this country who wanted to blame America, and our allies like Israel. But they were seen as nuts and rightly ostracized.

Today, the voices of the nuts are no longer ostracized. Slowly but surely, our unity and resolve on 9/12 faded like the flags we attached to our car doors or bumper stickers. It started with influential voices here and there, increasing in a steady crescendo over the past 18 years to the sickening point where we are at today.

Liberals and leftists in the political class and Corrupt Media will do anything to excuse radical Islamists who have committed terror attacks in the name of Islam. But as we’ve seen recently in several mass shootings and the horrific attack in Charlottesville, VA two years ago, are giddy at any chance to attack all White Anglo-Saxon Protestant males as murdering, maniacal bigots.

The law abiding members of the NRA, who have not committed one single mass shooting, were labeled by the literal dunghole called SanFrancisco a “domestic terrorist group.” Never mind this is the same city, in the days after 9/11, hosted rallies condemning any possible action against al-Queda, and whose Board of Stupidvisors declared themselves a “military-free zone.”

In the East Coast leftist suburb of Montgomery County, MD outside of Washington DC. The County Executive decreed MoCo, by a stroke of his pen and no vote (like all good totalitarians do), that the county law enforcement was not to share immigration information with ICE. Then, after a series of rapes committed by illegal aliens in the county, critics of their sanctuary policy andconservative media outlets who reported on this outrage were basically labeledas neo-Nazis in a cowardly written statement.

Then today, Rep. Jerrold Nadler, a rabid, mad-dog partisan Democrat who once said of George W. Bush in 2007, “Nine-eleven was an act of war. The villains aren’t the terrorists. The villains live in the White House,” declared war on the US electoral system and the 63 million Americans who voted for President Donald J. Trump by beginning an impeachment inquiry into the President, even though there is no crime that has been committed by the President, except defeating the unfit Hillary Rotten Clinton (who even once said America had to “empathize” with our enemies).

Eighteen years later, we have become a nation who has shamefully forgotten the lessons of that day. Al-Queda did not single out their victims by their political beliefs, their skin color, their religion, or anything else. They attacked us as Americans. But the actions of the Left in the political class and media who spend too much time dividing us have dishonored the memory of the 9/11 victims (and those who’ve fought, died, or been maimed in the War on Terror) by engaging in the kind of “amnesia” CNN talked about. Instead of being at war with the enemy who attacked us on 9/11 (and who had for many years prior), these Leftists in politics and media are too politically correct to state who attacked us. Instead, they’re more than willing to attack their fellow Americans who disagree with them as being worse than those who attacked us 18 years ago, while also attacking the very foundations of our Republic.

Of all the anniversaries of 9/11, this one is the saddest and most shameful.