If "Hate Has No Home" With Leftists, Then Why Is All The Hate Coming From Their Side?

This break from my retirement from political blogging was prompted by a drive around my Northern Virginia bunker earlier today, when I came upon several homes with the sign pictured below in their front yards. 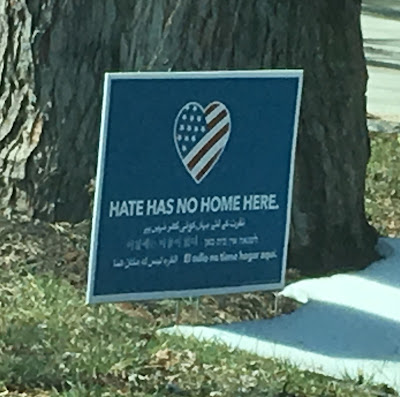 According to a Google search, the message from the signs came out the Chicago area (surprise! Obama's home) meant to "counter the divisive nature of the conversation surrounding the presidential election," according to the linked article from the Chicago Tribune.

Of course we know what that means. The people supporting Donald Trump are bigots. During the election, it was "Love Trumps Hate," now it has progressed to "Hate Has No Home Here." Why? People opposed to illegal immigration are called "anti-immigrant," even though they support legal immigration. Those who want to hold off on resettling refugees until they are better vetted are called "anti-Muslim." Those who oppose the infanticide known as abortion on demand are called "anti-woman." When liberals and the secular allies who attack the culture are losing, they respond to the last, desperate weapon they have, and they use it to great effect:

Liberals after the election in November tried to point to several bias crimes to prove their point. Unfortunately for them, they were debunked or proven to have been false reports.

But for all their self-righteous leading with the chin, these came liberals who claim to have such a monopoly on "tolerance," and "coexistence." These people with these signs in their yards supported a candidate who expressed hate and contempt for Republicans, those who believe in the Second Amendment right to bear arms, and those "deplorables" who opposed her campaign.

And these same liberals cannot explain what this nation has seen since President Trump was inaugurated. His daughter is accosted in front of her children on an airplane by a liberal. Washington DC was a riot zone by leftist agitators on Inauguration Day, and in Berkeley, CA, these same leftists rioted at UC Berkeley, formerly the home of freedom of speech, when disgraced Breitbart.com writer Milo Yiannopoulos was set to speak there. Women were assaulted with mace, and other acts of violence and rabble rousing occurred.

Ask a pair of sisters in the Philadelphia area what they have gone through for being Trump supporters, in a story published on Thursday (PhillyVoice).


In a PhillyVoice story published Tuesday, Boisvert discussed nearly 20 incidents of vandalism, harassment and threats she says have resulted for going all-in on supporting Trump. Since the story ran, four incidents of harassment occurred on just one day this week, she said, including a woman who dropped the F-bomb while her child sat strapped into a car seat. Lauren and her sister were outside shoveling snow.

That day they were also called “Nazi” and had to listen to a cluster of F-bombs that accompanied the ice balls thrown at them by a group of kids, according to the sisters.

“What kind of woman drops the F-bomb in front of her child?” Lauren Boisvert asked Giordano on the radio show.

But a neighbor, Tara Boyarsky Parvey, told PhillyVoice on Thursday the Boisverts' yard display is clearly meant to provoke a response and “seems to be twisting the knife.”

“The signs are not nice. She’s entitled to say what she wants to say, but she does not have a right to be treated nicely,” said Parvey, a former lawyer who now works in dispute arbitration and did not support Trump.

Typical liberal lawyer, blames the victim and supports the perpetrators.

From the Philadelphia area, lets travel to my old stomping grounds of Moron (Marin) County, California, where syndicated national talk show host Michael Savage was assaulted outside a restaurant in the very upscale, snotty hamlet of Tiburon (Rich Lieberman 415 Media).


Savage was with his dog, "Teddy", and finishing up dinner at Servino Restaurant in Tiburon, CA (north of San Francisco) when the unnamed assailant charged up to Savage and began yelling, "Hey Weiner", making fun of Savage's legal last name. The attacker then kicked the poodle out of the way so he could get to Michael and then grabbed Savage and threw him to the ground, according to an eyewitness who watched the attack along with several restaurant patrons.

Savage was not seriously hurt and his dog is OK but the incident left him bloodied and shaken.

UPDATE --10: 35 PT
Savage just released this statement to me:

"I WAS LEAVING SERVINOS RESTAURANT WHEN A TOTAL STRANGER FOLLOWED ME OUT OF THE RESTAURANT AND CONFRONTED ME.

HE SAID 'ARE YOU MICHAEL WEEENER"!  I TURNED TO HIM AND SAID, 'GO AWAY, I DONT KNOW WHO YOU ARE"

I TURNED TO LEAVE AND HE PUSHED ME AND I FELL DOWN.   HE MOVED TOWARD ME TO PUSH ME DOWN AND HE SHOVED MY 10 POUND POODLE OUT OF THE WAY TO GET TO ME.    HE HAS LIED AND SAID I PUSHED HIM.  THAT IS ABSURD.  BOTH OF MY HANDS WERE HOLDING ONTO THINGS!

And how did the liberal rag known as the Marin Independent Urinal report the story?


Michael Savage says he was assaulted outside restaurant

With a headline like that, who says the media doesn't have an agenda? Never mind that it wasn't just Savage who was attacked. An unknown man was also assaulted by the lib for coming to Savage's rescue. Other eyewitnesses, from what I understand, saw the assault.

I've been critical of Savage several times here on this blog, though I was a fan of his show in the early days he was on KSFO, up until the late 2000s once he regularly started attacking other hosts like Mark Levin, Sean Hannity, Rush Limbaugh and giving money to liberals like Jerry Brown. Regardless of whatever disagreements I've had with Savage, I was horrified and angry after reading about the attack on him, and even worse, that this liberal bully who attacked him (reports say the attacker is is 6' 5", while Savage is 5'6") attacked Savage's small dog as well.

What is even more unbelievable, is that the Tiburon police were forced to let the attacker go. Savage's attorney explained on his show this past Thursday, that assault is a misdemeanor (unless there's injury), even though Savage is a senior citizen (he turns 75 later this month).


Hopefully, Savage's attorney gets an airtight case that they can present to the Marin County DA. If not, we will see how deep the liberalism penetrates these wealthy, liberal communities where assaults on conservatives are looked at with a shrug.

So liberals, if you're concerned about all the "hate" in our political discourse today, maybe you better start policing your side instead of acting all self-righteous and pompous.
Posted by MaroonedinMarin at 11:03 AM No comments: