Do you want one more reason why I am not in the #NeverTrump camp?

Because I saw what happens when the sore losers in the GOP establishment don't get their candidate, as they did in Virginia in 2013.

The establishment's lackey was then Lt. Governor Bill Bolling, who pushed Mittens Romney on the state in the 2012 primaries by giving us him or Ron Paul (I voted Ron Paul as a protest vote, though I strongly disagreed with his foreign policy). The way the "good old boy" GOP works, it was Bolling's turn to run for governor, except the more conservative, Tea Party grassroots wanted a solid conservative candidate in then Attorney General Ken Cuccinelli.

Cuccinelli won the gubernatorial nod at the GOP convention, then Bolling the sore loser grabbed his toys and stomped off, refusing to endorse Cuccinelli, and airing sour grapes in the process. The national GOP abandoned Virginia and gave money instead to Krispy Kreme Chris Christie.

The result of Bolling's and the Establishment's temper tantrum? The head of Bill Clinton's Hillbilly Mafia named Terry McAuliffe became governor, a Democrat attorney general gained a questionable victory after ballots were mysteriously discovered in Fairfax county that put him over the top, all setting up the state to go for Hillary Rotten Clinton in 2016. 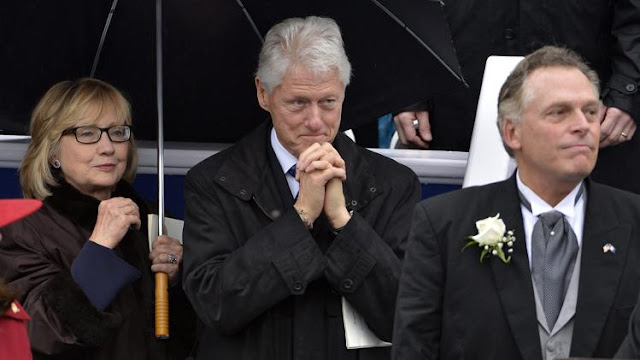 Turns out not only was Terry McAwful trying to help the Hildebeast by giving an unconstitutional amnesty to felons, he was giving money to the campaign of the wife of a top FBI official who later looked into the Clinton e-mail investigation (WSJ).


The political organization of Virginia Gov. Terry McAuliffe, an influential Democrat with longstanding ties to Bill and Hillary Clinton, gave nearly $500,000 to the election campaign of the wife of an official at the Federal Bureau of Investigation who later helped oversee the investigation into Mrs. Clinton’s email use.

The Virginia Democratic Party, over which Mr. McAuliffe exerts considerable control, donated an additional $207,788 worth of support to Dr. McCabe’s campaign in the form of mailers, according to the records. That adds up to slightly more than $675,000 to her candidacy from entities either directly under Mr. McAuliffe’s control or strongly influenced by him. The figure represents more than a third of all the campaign funds Dr. McCabe raised in the effort.

Mr. McAuliffe and other state party leaders recruited Dr. McCabe to run, according to party officials. She lost the election to incumbent Republican Dick Black.

And some laugh when Donald Trump says the system is rigged?

Our former Governor, Bob McDonnell, left office under a cloud because of trumped up ethics charges that he was later cleared of that, while looking improper, there was no quid pro quo proven. But what McAuliffe has done stinks on dry ice and is much worse. He is connected to a contender for the Presidency, who is under investigation for improper use of government e-mail that puts our national security at risk, and he's throwing money around to the "right people."

And now, three years later, the same GOP establishment is playing the same game. Started by allies of the Bushes, the Romneybots, the Marco Rubio cultists, still butt-hurt from their defeat at the hands of a crass, billionaire real estate mogul, are doing the same Bill Bolling sore-loser tantrum in the face of a candidate who is not only more corrupt than Richard Nixon, but a disciple of Saul Alinsky's radicalism who learned at the feet of the Lucifer-inspired community activist. Their savior is an unknown, kamikaze Republican whose name sounds like Egg McMuffin and who claimed admiration for the drunken John Boehner and the eunuch Paul Ryan, two people who did more to damage the GOP and caused the rise of Trump. I don't know about you, but when I hear Egg McMuffin and his surrogates at RedState and The Resurgent, they use the talking points of Hillary against Trump every chance they get.

No, I'm not trying to say that Trump is a conservative (he's not), or that he's "anointed by God to save America" (as some televangelists claimed). I think Trump is a fool, but even a fool is less dangerous than Hillary Rotten Clinton, who would sell out this nations security to enrich her and her family. The same Hillary who would embolden the murder of more unborn children under the legal term "abortion on demand." The same Hillary who would add more radical Left wing judges to not just the Supreme Court, but the whole Federal bench. The same Hillary who "empathizes" with America's enemies and sees her political opponents as more of a threat than jihadists.

We had our chance to stop Trump in the primaries and failed, mostly because a lot of these sore establishment #NeverTrumpers refused to coalesce around the one Constitutional Conservative who was the strongest (Ted Cruz) or were the Johnny Come Latelys who got on board when it was too late to make a difference (thanks Marco). At this point, I'm not concerned about saving the Republican Party, all I'm concerned about is saving the country. Going #NeverTrump is putting Party Before Country, and would only to to America what the GOPe did to Virginia three years ago.
Posted by MaroonedinMarin at 7:29 PM