Hillary Rotten Clinton was so repulsed by the 2005 tape released on Friday, where Donald Trump talked about "p*ssy" and tweeted her outrage.

The same Algore who was accused in 2010 of sexual assault by a masseuse, who called the climate fearmonger a "crazed sex poodle" (UK Telegraph). 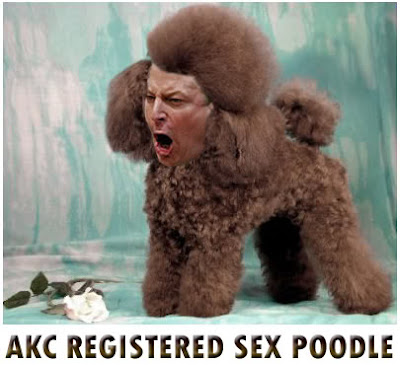 The unidentified 54-year-old woman gave police a detailed account of her claims that Mr Gore groped and kissed her in an aggressive attempt to have sex during a night-time appointment in his suite.

However, the police concluded that there was insufficient evidence to press charges.

The woman, who recalled telling Mr Gore he was behaving like a "crazed sex poodle", claims he pinned her to his bed and forcibly French kissed her.

...In her statement, made public by police, the masseuse said she arrived at the St Lucia Hotel's VIP suite to find Mr Gore drinking beer.

He greeted her with a hug and told her to call him "Al", she told police.

However, the nearly three-hour therapy session soon went sour after Mr Gore angrily insisted she massage him around his groin and then pounced on her, she claimed.

She said she feared he might rape her as he "flipped me flat on my back and threw his whole body face down over atop me, pinning me down and outweighing me by quite a bit".

Two other massage therapists accused Gore of sexual abuse around the same time. No word if Gore blamed his actions on gloBULL warming.

If our media wasn't so corrupt, acting objective while serving as the Hillary/DNC PR firm, she'd be questioned for her hypocrisy. But then again, Democrats look out for one another.


Posted by MaroonedinMarin at 5:45 PM

Grrr.
Figures.
Them lefties R out in LEFT field.
Let's hope they dont get placed
on the LEFT
at their Final Judgment.
Cya soon Upstairs.