Remember back in 2011, just after the House overwhelmingly turned to a GOP majority thanks to the Tea Party, Richard Milhous Hussein Obama hijacked a memorial to lives lost at a shooting in Tucson, AZ to lecture about inflamed political discourse?


Well, as that video compilation from the year of 2011 showed, leftists were the ones acting uncivil, violent and hateful. This year being an election year is no exception.

The Left and the Corrupt Media propping up the candidacy of Hillary Rotten Clinton has accused Donald Trump of inciting violence and hate.

Really? Remember what happened in San Jose earlier this summer? Those weren't liberals getting attacked by Trump supporters. It was the other way around. And now we know from the great work of James O'Keefe and Project Veritas that the Hillary campaign was involved in violent protests in Chicago and in Arizona.

Last weekend, we saw the dolt Joe Biden, who makes Dan Quayle look like an intellectual giant, wanted to take Donald Trump out behind the gym. Which is laughable, because Biden would probably lose a fight with a speedbag.


So did the washed up Robert DeNiro recently, a guy who is so desperate for attention because he hasn't made a decent movie in almost 20 years.

And what does that inspire?

Today, it was reported that some nut in Hollyweird destroyed Trump's star on the Walk of Fame.

In North Carolina, a county GOP headquarters was vandalized and firebombed. Closer to here in Northern Virginia, Loudoun County VA deputies are investigating threats made against the GOP headquarters in Sterling. The Fairfax County Republican County has reported they get calls almost daily being stolen or destroyed.

A month ago, when I was in Las Vegas for a little R and R, I saw this "artwork" from an artist on Fremont Street. Trump being beheaded by drug lord El Chapo, and other anti-Trump "artwork." 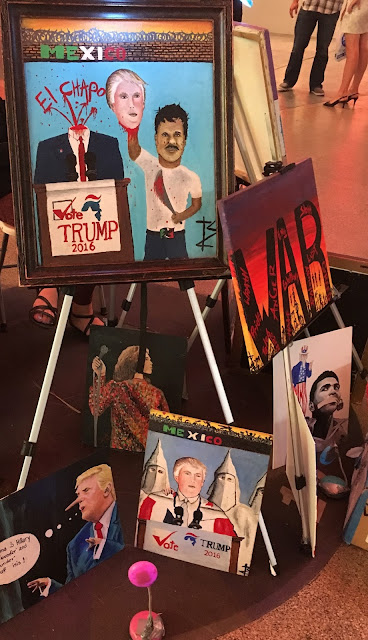 But do you see any of this being reported in the media?
Posted by MaroonedinMarin at 4:56 PM