The Hypocrisy of Anti-Gun, Pro-Terrorist Democrats

The Democrat Party reminds me of one kind of person you might see at your high school reunion. You know, the kind that has done nothing since graduation, and can only talk about reliving high school days.

That is the modern Democrat Party, stuck in the 1960s, like it was some magical time that they never wanted to leave. Never mind what most of the 1960s (with the exception of the Civil Rights movement) wrought upon America was the start of hedonism, treason, and an erosion of the moral and social order that made America great and productive.

We see these aging hippies who traded tye-dye for suits again as they threw their temper tantrum on the House floor, but this time, instead of advocating for equal rights, they wanted to take rights away from Americans as a way of playing SQUIRREL to distract from their inability to fight Islamofascist terror.

And why is that? Because if you look at some of the names of these anti-gun Democrats, you'd do just a little bit of digging to find out how they support arming our enemies and/or support domestic terrorists.

Who recently met with Congressman Rangel?

The daddy of the Orlando Jihadi, that's who. 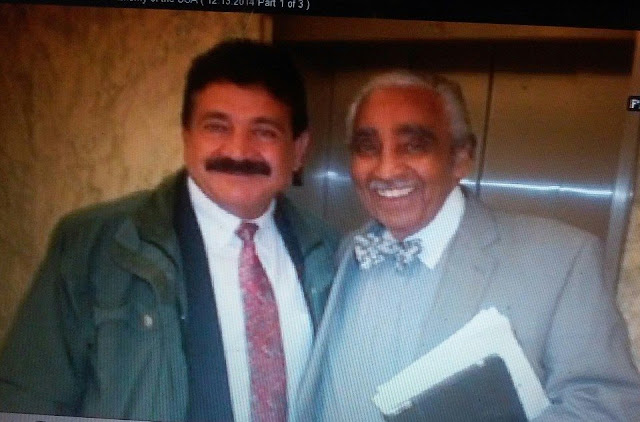 Congressman Jerrold Nadler from New York, said during the Party of Treason's temper tantrum that the Congress “is drenched in blood and the only way we can cleanse it is if the speaker of the House allows us to vote on this legislation. Every day that we don’t commit to a vote, the blood is on the leadership of this House.”

But Nadler supported Baraq Hussein Obama's arming of America's long-time enemy, Iran, with nuclear weapons. At one Hillary Rotten Clinton rally, Nadler said "Nine-eleven was an act of war. The villains aren’t the terrorists. The villains live in the White House," obviously referring to the Bush Administration.

Nadler, like Obama, has a soft sport for anti-American domestic terrorists. He played a role in the 2001 Presidential Pardon of a Weather Underground terrorist suspected in a deadly 1981 bombing (NY Post).

That intercession played a key role in Clinton’s decision Friday to commute the 58-year weapons-possession sentence for Rosenberg, long a suspect in the deadly 1981 Brink’s robbery in Nyack. She was never convicted on that charge.

“What [Nadler] did was to pass on the materials to the White House counsel’s office and say, ‘I’d like you to take a look at this,'” Schmeltzer said.

Neither the rabbi nor Nadler, who was well-regarded at the Clinton White House because he was one of the president’s most ardent defenders during Sexgate, could be reached for comment yesterday.

... Though the Brink’s robbery happened nearly 20 years ago, for those touched by the tragedy, it is still an open wound.

So are officers who worked side-by-side with the slain cops.

“I’m not happy about it at all,” said retired Officer Brian Lennon, Brown’s partner at the time. “Shame on President Clinton. Shame on him for moving to New York and letting her go.”

Southern California race-baiting corruptocrat Maxine Waters was quoted as saying she would take part in the sit-in for gun-control, "until hell freezes over." This is the same Maxine Waters who voiced opposition to a resolution calling for the communist hellhole of Cuba to extradite several criminals, one of them named Joanne Chesimard. Waters wrote to Pinko Cuban Dictator Fidel Castro in 1998.


I, and some of the Members of the Congressional Black Caucus, mistakenly voted for House Concurrent Resolution 254 which called on the Government of Cuba to extradite to the United States Joanne Chesimard and all other individuals who have fled the United States from political persecution and received political asylum in Cuba. Joanne Chesimard was the birth name of a political activist known to most Members of the Congressional Black Caucus as Assata Shakur.

For the record, I am opposed to the resolution.

...the most vicious and reprehensible acts were taken against the leaders and organizations associated with the Black Power or Black Liberation Movement. Assata Shakur, was a member of the Black Panther Party, one of the leading groups associated with the Black Liberation Movement. The Black Panther Party was the primary target of U.S. domestic government political harrassment and persecution during this era.

This illegal, clandestine political persecution was wrong in 1973, and remains wrong today.

What Maxine Waters didn't say is that Chesimard/Assata Shakur, is on the FBI Ten Most Wanted list, wanted for the 1973 killing of New Jersey State Trooper Werner Foerster twice in the head with his sidearm. Chesimard served time in prison until 1979, when Black Liberation Movement terrorists  "making a prison visit drew pistols, took guards as hostages and commandeered a prison van, spiriting Chesimard to a waiting getaway car — all in broad daylight. She emerged five years later in Cuba, given asylum by Fidel Castro, who cast her as a victim of U.S. racism."

For a bunch of Congresspersons who claim to hate guns and violence sure have a history of being comfortable supporting gun-toting, Left-wing terrorists. It appears that the modern Democrat Party has more in common with the SLA (Symbionese Liberation Army) than they do JFK and FDR.
Posted by MaroonedinMarin at 6:26 PM