Thoughts On The 2016 GOP Primary And Its Aftermath

The 2016 GOP Primary for the party's Presidential nominee ended Wednesday, when Ohio Governor John Kaisch pulled out of the primary, clearing the path for "Sideshow Bob", aka Donald Trump, to be the party's nominee.

Kaisch's move came the day after the Indiana primary that Trump won, and caused contender Ted Cruz to suspend his campaign.

So we know what Kaisch's role in running for President was, to do the bidding of the GOP establishment, who hate conservatives more than they do liberal progressives and put self-interest instead of the best interests of the nation.

From the time he became the first to announce he was running for President, Cruz was relentlessly under attack from not just the libs, but the GOP establishment. In preparing for the 2016 primary, RNC Chair Rinse Prewash (Reince Priebus) and the party "leadership" (I use that term loosely) showed themselves as so woefully inept they couldn't produce a fart at chili and bean cookoff, much less a winning Presidential campaign.

The party allowed so many conservative/Tea Party candidates in the race in an effort to split the conservative vote so their handpicked guy, Jeb Bush, the hapless Fredo Corelone of the Bush family, would be the nominee.

But along came Sideshow Bob (Trump), who stole Bush's thunder and upset the establishment. Trump hit on the right points (illegal immigration, voter discontent). I wasn't a big fan of the way how he first went about doing it, but kept an open mind to him because of the way he took on the establishment. So many people, including many who claimed the conservative mantle, liked his blunt talk, his politically incorrect way of saying things, that to them, Trump could do no wrong.

My mind closed to Trump when he decided to employ personal attacks against his opponents, using vile language, threats, birtherism (remember when that was once considered "racist?"), attacking spouses, and in the end, conspiracy theories against the father of his main rival. Trump also signaled a willingness to work with the "establishment." While claiming to oppose him, the establishment made it clear (in the words of George W. Bush, the sobbing drunk John Boehner, and the IRA terrorist sympathizer Peter King), that they viewed Ted Cruz as a bigger threat to the party. When Dirty Donald used Birtherism against Ted Cruz, the US Senate and Rinse Preewash did nothing to defend Cruz.

My endorsement and support for Ted Cruz had nothing to do with him as a person or a personality. I supported Cruz because he was the one candidate I felt who best articulated and defended not just in words, but deeds, the Constitution and the conservative principles we last saw in Ronald Reagan. In fact, Cruz was the most conservative candidate since The Gipper.

Far too many who have made a living or have billed themselves as "conservatives" sold the movement out, however, and cast their lot in with Donald Trump, a man who had no record of conservatism. Sarah Palin, Phyllis Schlaffly, Sean Hannity and the Faux News Network, Laura Ingraham are a few of the names. I could never trust them again after the way they betrayed conservative principles.

What Would Breitbart Say?

The same goes for many conservative forums and websites I've long patronized, even linked too, which became outlets for Trump and were willing to carry his Kool-Aid for him. I quit reading so many of them because of the Trump lovefests, and regurgitation of his rants and wacky conspiracy theories.

In 2008, a decade after the Cult of Clinton, we saw another Cult of Personality when Obama rose to prominence with the help of an adoring press who refused to vet or question his background. I expected more of conservatives and Republicans to make cult-like figures of leaders, but that's what happened with Trump. Everything we didn't like about Obama, many "conservatives" were willing to do and make this narcissistic bully their Obama, their Cult of Personality, and they'd attack you with the most vile language if you dared attack their new god.

More at this link.

Too many abandoned rational thought because of their anger (much of it justified) at the GOP establishment, and now we are stuck with a nominee who was not only a good friend of the Clinton's, but is now going back on so much of what he sold himself on.

I hate believing in conspiracy theories, but you couldn't think of a better one to help the Hildebeast. Have your good friend mount a third-party run as a Republican, and deeply divide the party, which would guarantee you, a deeply flawed candidate no one trusts or likes, the election. 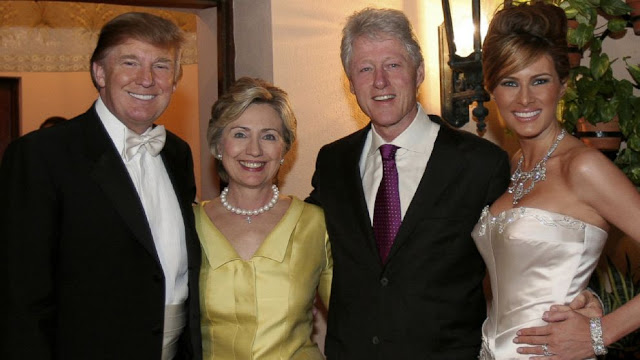 If the stakes weren't serious, it would be a joke. But it is angering. This isn't the "lesser of two evils" we had to choose in 2008 or 2012. This is a choice between a socialist progressive and a populist progressive who are both equally as destructive to the future of this nation. In other words, we as conservatives have no choice in this election, we are just told by Rinse Preewash to get in line and goosestep behind someone whom most GOP primary voters voted against.

Do you feel disenfranchised yet?

This is the last election that can make or break whether or not this nation will return to its founding principles of liberty, or if the Constitution will be finally shredded by a liberal Supreme Court which will erode individual liberty for the "common good," and we will "spend our sunset years telling our children and our children's children what it was once like in the United States where men were free." And if you think Donald Trump will prevent a liberal takeover of the court, what proof do you have to rest that on?

In a time when we have been devoid of leaders, our nation is breathing it's final gasps of air, killed by the self-interests of a narcissistic billionaire who saw the party's nomination as his own personal prize, and the once Grand Old Party whose "leaders" are more interested in preserving what power they can hold onto, instead of preserving liberty for our children and their children.

So where do we go from here? With the exception of down-ticket races, I don't feel like I can vote for a person who does not hold my values. It may be a third-party vote or a write in, but I cannot justify voting for Trump just because "he's not Hillary."

I think it is time for conservatives to start a third-party. The GOP, as seen this election, as well as in Mississippi in 2014 and Virginia in 2013, is hostile to real conservatives and only talks the talk in order to get us to vote for them. But not a party for the sake of a party. Conservatives need to educate the American voter and explain why conservatism is in the best interests of all voters, how the nation will be more prosperous and free under our philosophy. The Republican Party has not educated the voting public on conservatism (save for Reagan and the 1994 Contract with America), and too many times has seemed ashamed and apologetic toward conservatism, letting liberals label us as "racist" or any number of slurs.

The Article V Project (read Mark Levin's The Liberty Amendments) is probably one of the last tools humanly possible for us to save what is left of this nation, should as I fear we see another liberal win in 2016.

But in the end, what will save this nation is not a new political party, or man or woman. Our nation has turned its back on God. Our leaders have followed self-interest instead of what the best interests of the nation are. Our society has become obsessed with celebrity and pop-culture, hypnotized by "reality TV". We've become worshippers of the Golden Calf and our own finite intelligence, so is it no wonder we've fallen for cultish leaders like the Clinton's, Obama, and now Trump?
Posted by MaroonedinMarin at 1:18 PM