In Attacking Ted Cruz, The Sobbing Drunk John Boehner Shows Who The Establishment Candidate Is

The worst Speaker of the House, John Boehner, showed us exactly why he is deserving of such a distinction, and why he no longer holds that post (ABC News).


In a talk at Stanford University Wednesday, the plainspoken Ohio Republican called the Texas senator "Lucifer in the flesh," adding that he found Cruz difficult to work with in Congress.

“I have Democrat friends and Republican friends," Boehner said, according to the Stanford Daily. "I get along with almost everyone, but I have never worked with a more miserable son of a bitch in my life.”

Cruz sparred with Boehner throughout his speakership over funding the government, most notably in 2013, when the government shut down for more than two weeks. Cruz's allies in the House helped force Boehner out of Congress last year.

Boehner, an avid golfer, said he and 2016 front-runner Trump are "texting buddies," and that they've played golf together over the years. He stopped short of endorsing his policies, but said he would vote for Trump in the general election if the New York businessman becomes the GOP nominee.

Cruz took to Twitter this morning, writing, "Tell me again who will stand up to Washington? Trump, who's Boehner's "texting and golfing buddy," or Carly & me?"

"I've met John Boehner two or three times in my life. If I have said 50 words in my life to John Boehner. I would be surprised and every one of them has consisted of pleasantries," Cruz said.

Cruz also came back with a good jab at the sobbing lush, saying that Boehner wasn't just mocking Cruz, he was mocking millions of Americans who had given Boehner and the GOP the majority. This is true. Boehner has repeatedly mocked and attacked real conservatives while refusing to stand up to Richard Milhous Hussein Obama, Pelosi and Reid. I remember reading Jenny Beth Martin's book on the Tea Party where she wrote about meeting Boehner after the 2010 elections brought him the Speaker's gavel. Boehner essentially laughed in her face when presented ideas about cutting the size of government, all but showing Boehner and his establishment allies had no interest in Tea Party, grassroots conservatives, they were just interested in their votes on Election Day. 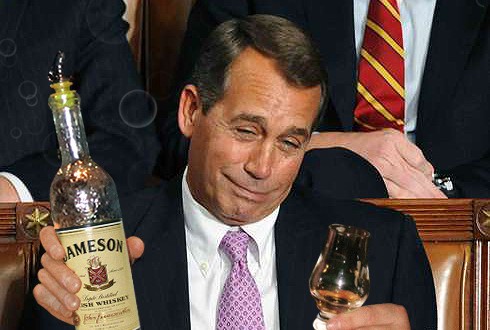 And how could the Republican Party give such a power to someone who not only stood back and surrendered to Obama and the liberals, but allegedly has a drinking problem.


Look at that image on the video (screenshot below) Boehner is not wearing socks with his dress shoes in a TV interview, and wearing slacks that show him seriously flooding. 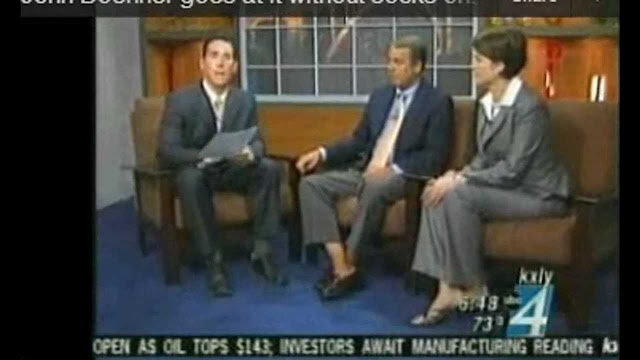 What is important is not only is the old drunk good buddies with "Ducking" Donald Trump, Trump bought Boehner like a cheap whore on a street corner. In 2012, Trump gave $100,000 to a Boehner linked PAC. But that wasn't all, as Erick Erickson noted at his new blog The Resurgent.

What’s more, Trump also gave $100,000.00 to the Congressional Leadership Fund, a Republican Establishment PAC that was created to crush conservatives at the behest of John Boehner.

Running as an anti-establishment Republican now and courting Sarah Palin is a distraction from two stark facts.

In 2010, with the rise of the Tea Party, Trump supported Democrats against conservatives.

In 2014, Donald Trump supported the Republican Establishment as it sought to crush the tea party and conservatives.

So, thank you, John Boehner (you too Peter King, you IRA terrorist sympathizer). In your stupor, you showed us all (except maybe the Trump Kool-Aid drinkers) just who the establishment choice for President is...none other than Donald Trump.

Now go have another martini.
Posted by MaroonedinMarin at 6:17 PM