DOUBLE STANDARD: No One Calls Out The Clintons, Democrats, For Honoring A Former KKK Kleagle

Donald Trump (aka Sideshow Bob) has come under attacks for an appearance on CNN this past Sunday with Jake Tapper, where he would not disavov an endorsement by the Ku Klux Klan or David Duke, acting as if he didn't know who Duke was, even though he had previously denounced Duke earlier.

This whole mess is Trump's creation, by acting he never knew of Duke when evidence shows the opposite in his previous denunciations. But the damage was done, as Trump's misstep fits into the liberal Democrat/media narrative of tar and feathering any Republican, or opponent of liberalism as being a bigot.

Despite Trump's mishandling of the Duke/KKK bruhaha, what is missed by the media is how the Klan was a product of Democrat reaction to Republican legislatures after Reconstruction, the era after the Civil War.

David Duke, similarly, cannot be seen as a "conservative Republican." He has sought office as both a Democrat and a Republican, and had supporters seen at Leftist anti-war rallies due to his hatred for the State of Israel. Duke also wrote glowingly of anti-war, Bush-hating mom Cindy Sheehan.

But for the all the reaction towards Donald Trump, will anyone pay attention to Bill and Hillary Clinton praising a former Kleagle of the Ku Klux Klan who led the filibuster against the 1964 Civil Rights Act?


In the early 1940s, a politically ambitious butcher from West Virginia named Bob Byrd recruited 150 of his friends and associates to form a chapter of the Ku Klux Klan. After Byrd had collected the $10 joining fee and $3 charge for a robe and hood from every applicant, the "Grand Dragon" for the mid-Atlantic states came down to tiny Crab Orchard, W.Va., to officially organize the chapter.

As Byrd recalls now, the Klan official, Joel L. Baskin of Arlington, Va., was so impressed with the young Byrd's organizational skills that he urged him to go into politics. "The country needs young men like you in the leadership of the nation," Baskin said. 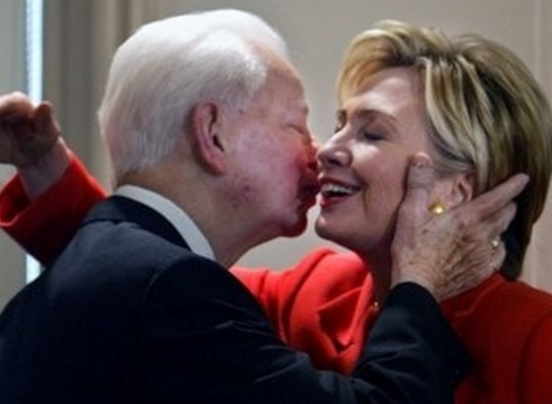 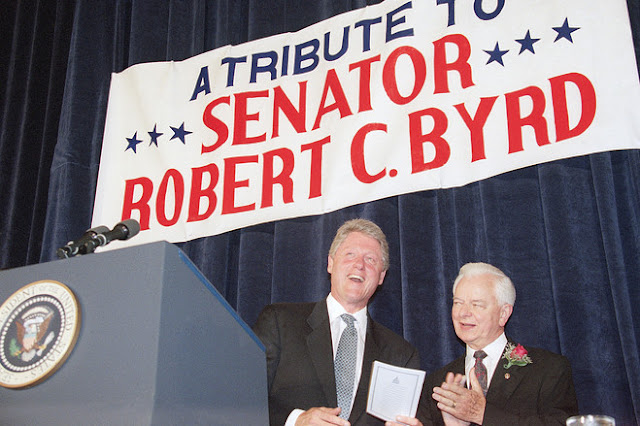 "They mention that he once had a fleeting association with the Klu Klux Klan, and what does that mean? I'll tell you what it means. He was a country boy from the hills and hollows of West Virginia. He was trying to get elected. And maybe he did something he shouldn't have done, and he spent the rest of his life making it up. And that's what a good person does. There are no perfect people. There certainly are no perfect politicians."

Here's Hillary Clinton, the presumptive 2016 Democrat nominee, honoring her "friend and mentor" Byrd, with clip of the former Senator/Kleagle talking in 2001 about "white niggers."

But of course, the media is silent about this, just as they are about the history of the alleged "Civil Rights President" Lyndon "I'll have those niggers voting Democrat for the next 200 years" Johnson.
Posted by MaroonedinMarin at 11:31 AM