WE SURVIVED!!! Algore's "Earth Will Burn Up In 10 Years" Doomsday Prediction Flops

I remember this from all the time looking at Rush Limbaugh's website, and when he'd played the audio of it, but it was 10 years ago today that former Vice President Algore made an "end-times" prediction.


RUSH: Try this one from yesterday's stack. I don't know if you people know this or not, but Al Gore has been out at the Sundance Film Festival out there in Park City, Utah. This is one of Robert Redford's big do's, and apparently Al Gore is working on a movie that -- what is the name of this movie? Oh, that's right, "An Inconvenient Truth," and the movie will document his efforts to raise alarm on the effects of global warming, and so he brought Tipper and the kids out there.

He's attending parties and posing for pictures with his fans. He's enjoying macaroni and cheese at the Discovery Channel's soiree. He's palling around with Laurie David of Curb Your Enthusiasm, who is the husband of Larry David, who drives the Prius and then flies the GV. Larry David says, "You know, Al is a funny guy, but he's also a very serious guy who believes humans may have only 10 years left to save the planet from turning into a total frying pan."

Now, the last time I heard some liberal talk about "ten years" it was 1988, Ted Danson. We had ten years to save the oceans; we were all going to pay the consequences, which would result in our death. Now Al Gore says we've got ten years. Ten years left to save the planet from a scorching. Okay, we're going to start counting. This is January 27th, 2006. We will begin the count, ladies and gentlemen. This is just... You have to love these people -- from afar, and from a purely observational point of view.

Well, this morning, the time on Rush's website reads that zero hour is here.

In case many of you were wondering, from my perspective, I could have sure used some of that gloBULL warming this past weekend, after the DC burbs were hit with almost 30 inches of snow from a blizzard on Friday night through all of Saturday. I tweeted the following photo from my top floor apartment to the Chicken Little of the GloBULL Warming movement Sunday morning. 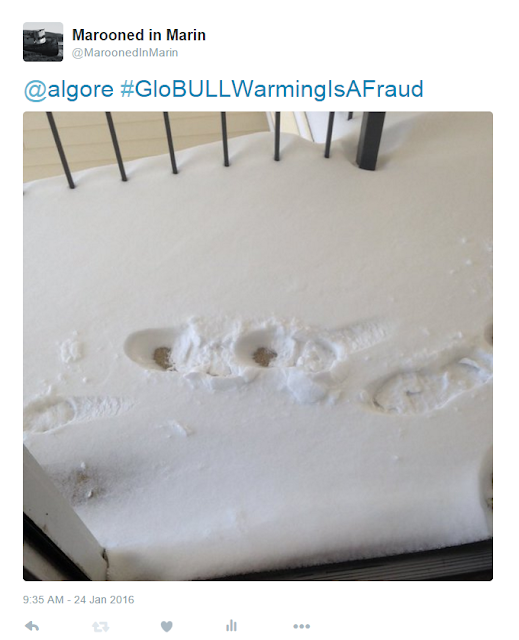 Nevertheless, I'm sure the Algore Travelling Medicine Show will cook up some excuse for why his prediction was wrong, because he's done so previously.

Posted by MaroonedinMarin at 5:07 AM