You can tell how dysfunctional the leadership of the Republican Party has become when they start acting like liberals and willing to make allies with people they once saw as a threat to their power, all to destroy one person.

Donald Trump, aka "Sideshow Bob" of The Simpsons TV show, decided he could not beat Ted Cruz on the issues, so he had to embrace "birtherism" in an attempt to take him down.

The Republican Party, who can't stand the fact that Cruz (like Sarah Palin) doesn't goosestep to the party drumbeat and is willing to call out corruption within the party, has decided to join in with Trump, who they once wanted to destroy, in an effort to destroy whom they really detest, because Cruz has been a threat to their power and cronyism.

Take the lying Mitch McConnell, the yellow-bellied eunuch who fancies himself as Senate Majority Leader (The Hill):

“I just don’t think the Senate ought to get into the middle of this,” McConnell said Sunday on ABC’s “This Week.” “These guys will all slug it out in Iowa and New Hampshire. We’ll have a nominee hopefully by sometime in the spring.”

But the Senate was willing to pass a resolution on the question of John McCain's birth back in 2008. What's the difference, Mitch? It it because you're still teed off that Ted Cruz called you out on your crap last year? That you're a corrupt, lying sack of garbage?

The blonde anti-Semitic dingbat Ann Coulter took her idiocy to a new level when Liz Mair confronted her about how she had once said Cruz was a national-born citizen, who which the dingy Coulter said "I changed my mind." Of course Ann! You sold yourself to Donald Trump like the cheapest trick on the worst street corner.

Then there is the putrid RNC Chair Rinse Preebus, who is all but throwing Ronald Reagan's 11th Commandment out the window, encouraging these wacko birthers by refusing to get involved.


TIME: A topic in the news today: Ted Cruz was born in Canada. Is he constitutionally eligible to be President?

Priebus: Listen, I don’t get involved. I’m not going to get in the middle of all these candidate issues. It’s a bad place for me to be. I’ll let all these folks argue about this stuff, and I’m going to stay out of it.


This is absolutely inexcusable. I get that Priebus does not want to get in the middle of a discussion over whose tax plan is best, or over whether one candidate is being truthful about another candidate or not. These are all battles that Reince is absolutely right to stay out of.

But there is absolutely no excuse not to say, unequivocally and forcefully, that the guy who is in second place right now in the polls is eligible to take the office if elected. Especially for such an open and shut constitutional case like this.

For all my criticism of him, and how I think he was the worst GOP Presidential candidate in history, I do have to give kudos to Mitt Romney for trying to bring some sanity and sense into this. 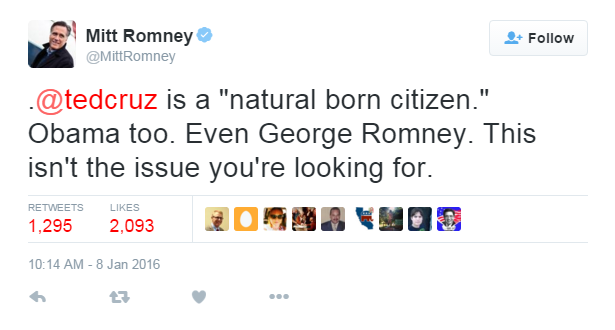 Are too many RINOs so blinded by their hatred toward Ted Cruz they are going to embrace wacko conspiracy theories that liberals just a few years ago called "racism" when it applied to their "President"?  If that's the case, then Preebus, McConnell, McCain, FioRINO, Donald Dump and any other GOP-establishment clown who is embracing this are just as unpatriotic as the entire Democrat Party, but in a different way. Democrats embrace America's enemies while RINOs sell out America just so they can profit for themselves from their cronyism. We've been down this road here in Virginia, when we saw how the GOP establishment is willing to help elect a liberal when one of their own doesn't get the nomination.

Which is why I'm giving Rinse Preebus and the RNC fair warning. You sabotage Ted Cruz's chances of being the GOP nominee and the person who can restore America, then I say expletive you! I will NEVER vote for any Republican candidate, EVER!
Posted by MaroonedinMarin at 5:27 AM

Applause is ringing out loudly.

i feel the same