Just like four years ago, the same GOP establishment scum are coming out of the woodwork to stick the knives in the backs of their own in order to protect their grasp on power.

And, they're willing to get into bed with the candidate they so hated, Donald Trump, in order to destroy not Hillary Clinton, but Ted Cruz. These RINOs would sell their mother's souls to the Satan if it meant keeping or getting more power, money and influence. 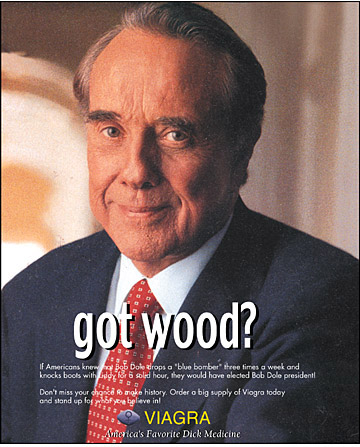 Bob Dole, the former Kansas senator and 1996 Republican presidential nominee, has never been fond of Senator Ted Cruz of Texas. But in an interview Wednesday, Mr. Dole said that the party would suffer "cataclysmic" and "wholesale losses" if Mr. Cruz were the nominee, and that Donald J. Trump would fare better.

"I question his allegiance to the party," Mr. Dole said of Mr. Cruz. "I don't know how often you've heard him say the word 'Republican' - not very often." Instead, Mr. Cruz uses the word "conservative," Mr. Dole said, before offering up a different word for Mr. Cruz: "extremist."

"I don't know how he's going to deal with Congress," he said. "Nobody likes him."

But Mr. Dole, 92, said he thought Mr. Trump could "probably work with Congress, because he's, you know, he's got the right personality and he's kind of a deal-maker."

Allegiance to Party? Excuse me, Senator Dole, but shouldn't allegiance to country and the Constitution come before Party? You're just as unpatriotic as every elected Democrat, except that you'll stand by and let them ruin the nation while you make money off of it as a crony lobbyist.

Even worse is North Carolina Senator Richard Burr, who is busy doing damage control because he let the cat out of the bag.


U.S. Sen. Richard Burr on Thursday strongly denied a news report that said he had told people he would vote for Democrat Bernie Sanders over Republican Ted Cruz.

Burr’s aides asked The Associated Press for a retraction. An AP spokesman said the news agency was sticking by its story.

“I will support whoever the GOP nominee is,” Burr tweeted. “@AP is trying to create discord where there isn't discord by telling lies.”

Burr was responding to an AP story by reporter Erica Werner about Cruz’s unpopularity with fellow Republican senators.

The story said, “Cruz has become such a pariah that one of his colleagues, Sen. Richard Burr of North Carolina, told supporters at a campaign fundraiser … that he would vote for liberal Sen. Bernie Sanders for president before Cruz, according to one person who attended the event.

“Burr did not appear to be joking, said the person, who demanded anonymity to discuss the private gathering,” the article stated.

Add the clown from Mississippi, Trent Lott to the chorus of Vichy Republicans. And then Michelle Malkin at Conservative Review tells us about the incredibly putrid Judas known as Orrin Hatch, joining in the mob to crucify Ted Cruz.

"I think we'll lose if he's our nominee," said Orrin Hatch, the most senior Republican in the Senate.

"There's a lot of people who don't feel he can appeal to people across the board," Hatch said. "For us to win, we have to appeal the moderates and independents. We can't just act like that only one point of view is the only way to go. That's where Ted is going to have some trouble."

Let me be polite here: Go blow it out your ear, Sen. Hack. Er, Hatch.

I’ll say it again: Seven-term incumbent Hatch embodies everything that’s wrong with the GOP brand. He’s a mascot for the Big Government Republican parade and masquerade of career politicians who stand for nothing and roll over for everything.

D.C.’s GOP establishment can’t stand the idea of a conservative presidential candidate who would actually pay more than election-year lip service to conservative principles. That’s why so many entrenched GOP Senators are pulling out all the stops to trash their colleague. Sen. Cruz is a stiff antidote to the Beltway-itis that has metastasized in the GOP halls of power.

Hatch is parroting all the establishment crap spun by people like Karl Rove that you can't alienate so-called "moderates" if you want to win. Well, Orrin, those precious "independents" went for Romney in 2012 and I don't see how that helped any. Maybe you spent too much time while you were in DC being Ted Kennedy's designated driver instead of fighting for conservative principles.

It's not just Ted Cruz who establishment RINOs are attacking, it appears a campaign or someone connected to a campaign is trying to intimidate talk radio host Mark Levin to try and silence him (Red State).


Mark Levin deserves a ton of credit for the work he has done in the last couple of weeks. Although he was initially pretty friendly to Trump, the disgusting liberal Democrat attacks that Trump has started against Ted Cruz have made Levin realize what a snake Trump is, and he has called out Trump accordingly.

Unlike certain other talk radio figures, Levin has always been willing to frankly admit error, and when he does so, his anger can be a sight to behold.

Well, Levin revealed today on air that one of the campaigns has been digging around for dirt on his personal life, trying to shut him up.

Listen to the audio here:


Levin did say he doesn't believe it is Donald Trump's campaign behind the intimidation, but regardless, you start to wonder especially after Trump went Alinsky on Ted Cruz.

But seriously, this is what the GOP has become? A party willing to put liberals in power if it means preventing a conservative getting elected? I thought what happened here in Virginia back in 2013 was bad. It got worse in Mississippi in 2014 when the "good ole boys" used the tools of the Left to defeat Chris McDaniel to defend their tool Thad Cochoran.

Which is why I said, the RINOs are as unpatriotic as liberals.
Posted by MaroonedinMarin at 7:42 PM