So Now We Know Obama Lied For Political Purposes In 2008 When He Condemned Fr. Michael Pfleger

Michelle Malkin noted the presence of an old Obama ally from Chicago, Father Michael Pfleger, at the phony town hall on guns held at CNN.


When your citizen “town hall” is invitation-only and jointly co-produced by CNN and the Obama White House, every participant is a potted plant.

As I reminded you in my syndicated column before tonight’s Kabuki town hall on guns, both Obama and CNN have a long history as manufactured-narrative gardeners.

Right on cue, or rather left on cue, one of the chosen people allowed to question Obama was radical, race-baiting nutball Catholic priest Fr. Michael Pfleger from Obama’s Chicago.

She has more about the back ground of Pfleger, who could be considered the Vanilla Ice of race-baiting "preachers", including how he once called America "the greatest sin against God." 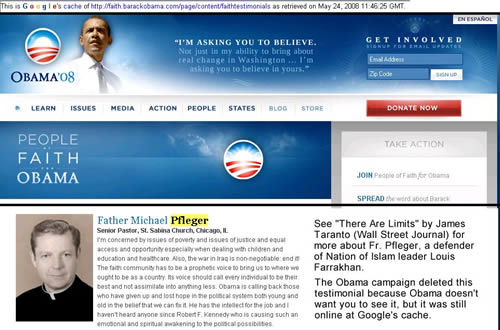 Obama pretended to distance himself from his racist "church" as well as Fr. Pfleger back in May 2008 after the following sermon from Obama's church given by Pfleger was made public.

“We must be honest enough to expose white entitlement and supremacy wherever it raises its head…. [W]hen Hillary was crying, and people said that was put on, I really don't believe it was put on. I really believe that she just always thought, ‘This is mine. I'm Bill's [Bill Clinton's]wife. I'm white. And this is mine. I just got to get up and step into the plate.’ And then out of nowhere came, ‘hey, I'm Barack Obama.’ And she said, ‘Oh DAMN, where did you come from!!? I'm white. I'm entitled. There's a black man stealing my show.’” Pfleger then mimicked Mrs. Clinton crying as the audience gave him a standing ovation. Added Pfleger: “She wasn't the only one crying. There was a whole lot of white people cryin’!!!”

Well, here was Obama during a commerical break, all too happy to slap skin with this racist "preacher." 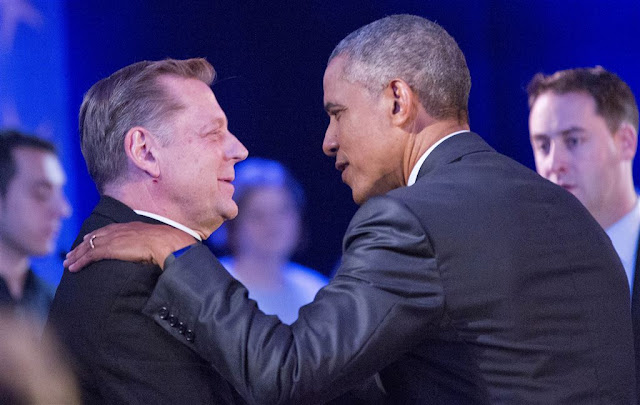 So I guess we can conclude that Obama's rebuke of Pfleger in 2008 was "just words" and all for political purposes. What else have we come to expect from him but lies and bigger lies?
Posted by MaroonedinMarin at 1:10 PM