If Anyone But Hillary Had Done It (Asked Someone To Submit Classified Information Without Markings)...

You would never hear the end of it on the news, and it would blanket the front page of the Washington ComPost, New York Slimes and every other liberal rag.

The Department of (Racial) Justice would be getting an indictment ready.

Remember how Scooter Libby's life was ruined when the Democrat government/media complex needed a head from the Bush Administration to roll over the supposed "outing" of a CIA agent? Libby had nothing to do with it, but the liberal's appetite to bring down the Bush Presidency (aided by the feckless advice of Karl Rove to sit back and take it so to risk not looking political) had to be satisfied.

Here, we find out Friday something happened much worse than anything Libby was alleged to have done (Life Zette).


The latest batch of Hillary Clinton emails released by the State Department early Friday contain what may be the smoking gun that forces the Justice Department to charge the former secretary of state with a crime, according to former federal prosecutor Joseph diGenova.

"This is gigantic," said diGenova. "She caused to be removed a classified marking and then had it transmitted in an unencrypted manner. That is a felony. The removal of the classified marking is a federal crime. It is the same thing to order someone to do it as if she had done it herself."

On the June 17, 2011, email chain with senior State Department adviser Jake Sullivan, Clinton apparently asked Sullivan to change the marking on classified information so that it is no longer flagged as classified.

Clinton, using her private email server, asks for "the TPs," apparently a reference to talking points being prepared for her. Sullivan, who is using his official State Department email, responds, "They say they've had issues sending secure fax. They're working on it." Clinton responds, "If they can't, turn into nonpaper w[ith] no identifying heading and send nonsecure." 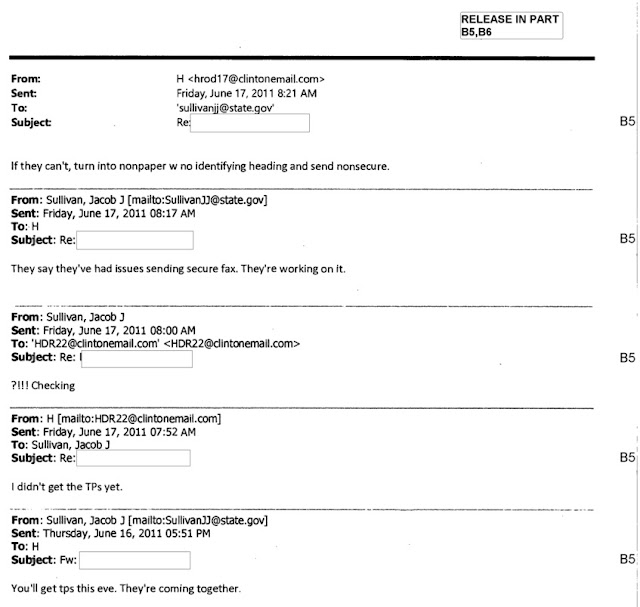 It's not clear if Sullivan actually followed through on Clinton's orders. But if he did, it may expose Clinton to serious legal jeopardy.

Some have speculated that while the FBI may recommend charges, Attorney General Loretta Lynch might try to avoid doing so for political reasons.

The revelation also appears to put to the lie Clinton's claim that she never handled classified information on her server.

Here's a Fleetwood Mac song Hillary can use as her campaign anthem.

"This means that when she said, 'I never received anything marked classified,' she in fact did," diGenova said.

David Bossie, president of the watchdog group Citizens United, said the email could become the emblem of Hillary's email scandal.

"It proves that Hillary Clinton affirmatively instructed senior staff to send classified data to an unsecured server," he said. "With that, it cements into history, much like the famous Bill Clinton finger wag."

But there's more to this story, and it involves the Clinton's longtime ally and mudslinger Sid Blumenthal e-mailing the Hildebeast in 2011 detailed information about the Sudan (Observer.com).


Remarkably, the report emailed to Hillary by “sbwhoeop,” which was Mr. Blumenthal’s email handle, explains how Sudan’s government devised a clandestine plan, in coordination with two rebel generals, to secure control of oil reserves in the disputed region of Abyei. This is juicy, front-page stuff, straight out of an action movie, about a region of Africa that’s of high interest to the American and many other governments, and the report is astonishingly detailed.

Its information comes from a high-ranking source with direct access to Sudan’s top military and intelligence officials, and Mr. Blumenthal’s write-up repeatedly states the sources – there turn out to be more than one – are well-placed and credible, with excellent access. It’s the usual spytalk boilerplate when you want the reader to understand this is golden information, not just gossip or rumors circulating on the street, what professionals dismiss as “RUMINT.” Needless to add, this is generating a lot of talk in Sudan, where the media is asking about this shady affair – and how Sid Blumenthal, who’s not exactly an old Africa hand, knew all about it.

...But is this an NSA assessment? If so, it would have to be classified at least Secret/Sensitive Compartmented Information, a handling caveat that applies to most SIGINT, and quite possibly Top Secret/SCI, the highest normal classification we have. In that case, it was about as far from Unclassified as it’s possible for an email to be.

No surprise, NSA is aflutter this weekend over this strange matter. One Agency official expressed to me “at least 90 percent confidence” that Mr. Blumenthal’s June 8 report was derived from NSA reports, and the Agency ought to be investigating the matter right now.

There are many questions here. How did Sid Blumenthal, who had no position in the U.S. Government in 2011, and hasn’t since Bill Clinton left the White House fifteen years ago, possibly get his hands on such highly classified NSA reporting? Why did he place it an open, non-secure email to Hillary, who after all had plenty of legitimate access, as Secretary of State, to intelligence assessments from all our spy agencies? Moreover, how did the State Department think this was Unclassified and why did it release it to the public?

No one can say that this does not rise to the level of a crime, and if they are, they are only lying to protect some fanatical, ambitious, narcissistic witch who will do anything (including lie to the families of four American killed at Benghazi and then say they're lying) to get more power and aid in Richard Milhous Hussein-Obama's Alinskying of Amerika.

Posted by MaroonedinMarin at 12:43 PM