Budget Sellout: The Only Difference Between Paul Ryan & John Boehner? No Martini & Cigarettes

But Paul Ryan proved not only can he bend over and surrender like Boehner to a lawless White House, but can be sold to lobbying interests like the cheapest trick on the block (Washington Times).


The White House declared victory Wednesday over congressional Republicans in the budget negotiations that concluded lateTuesday night, saying Democrats beat back the GOP across the board.

White House officials cited a long list of wins over majority Republicans on individual budget items ranging from funding for Planned Parenthood to an overall increase in spending beyond previous “sequestration” caps.

He listed half a dozen budget battles where the White House won, including fighting off efforts to delay Mr. Obama’s plan to accept Syrian refugees, defeating a GOP effort to cut funding to combat climate change, stopping an attempt to block the National Labor Relations Board from expanding employer liability, and halting an effort to repeal a tax on medical devices.

“We walked into these negotiations focused on making sure that Republicans would not succeed in advancing their ideological agenda,” Mr. Earnest said. “There were a variety of attempts… and we did succeed in fighting off those efforts.”

Even on one of the few setbacks for President Obama — the lifting of a ban on U.S. crude oil exports — Mr. Earnest said the loss was not particularly troubling because the U.S. already exports 4.3 million barrels of refined petroleum per day and another 500,000 barrels of crude oil via wavers of the ban.

Paul Ryan sold out the border fence, but doesn't mind having a fence built around his mansion (Breitbart). He also helps fund sanctuary cities, Obama's illegal and unconstitutional amnesty, more foreign workers (when more Americans since 1977 are out of the workforce), and Obama's terrorist resettlement Syrian refugee program. 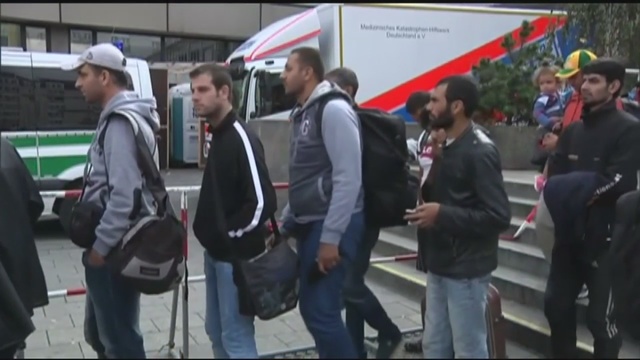 Don't see any "orphans and widows" in this group arriving in Texas, huh?
Paul Ryan funds more of it for Il Douche Obama.


When you surrender the power of the purse -- and that's the primary power the House of Representatives has.  Not a penny of money can be spent in this country by this government without the House of Representatives authorizing it.  Obama can spend all he wants, but if the House doesn't give him the mechanism, he can't spend any of it.  But the Republicans squandered that.  They gave up the power of the purse.  The reason they did that is because for some inexplicable reason, they are literally paranoid and scared to death of even being accused of doing something that would shut down the government.

So to avoid even the accusation that they were going to or would ever even think of shutting down the government, they signaled that whatever Obama wanted to spend, he would get, because they figured that had less damage to them politically than the allegation that they were shutting down the government.  So, very simply, ever since the Republican Party became the party of keeping the government open at all costs, we get bills like this.  There's simply no stopping the Democrats.  There's no mechanism.  Every constitutional mechanism found in the power of the purse, Separation of Powers, the Republican Party years ago gave it away, in total fear of the media.

...This was out-and-out, in-our-face lying, from the campaigns to individual statements made about the philosophical approach Republicans had to all this spending.  There is no Republican Party!  You know, we don't even need a Republican Party if they're gonna do this.  You know, just elect Democrats, disband the Republican Party, and let the Democrats run it, because that's what's happening anyway.  And these same Republican leaders doing this can't, for the life of them, figure out why Donald Trump has all the support that he has?  They really can't figure this out?

Paul Ryan, Rinse Preebus, Marco Rubio and all the other Republican sellouts need an education, because these words are just as true today as they were 40 years ago when they were spoken.

Posted by MaroonedinMarin at 5:12 AM