Donald Trump has once again come under fire for stating he saw Muslim-Americans in New Jersey celebrating the destruction of the World Trade Center on 9/11 (Fox News).


The mayor of a New Jersey city slammed Republican presidential candidate Donald Trump Sunday after the real estate mogul repeatedly claimed that he saw people cheering the Sept. 11, 2001 attacks across the Hudson River from where the Twin Towers fell.

Trump first told the story Saturday at a rally in Birmingham, Ala., as he pressed the need for greater surveillance, including monitoring certain mosques, in the wake of the Paris attacks.

Trump repeated the claim Sunday in an interview on ABC's "This Week" after host George Stephanopoulos explained that police had refuted any such rumors at the time.

"There were people that were cheering on the other side of New Jersey, where you have large Arab populations. They were cheering as the World Trade Center came down," he said.

"I know it might be not politically correct for you to talk about it," he added, "but there were people cheering as that building came down, as those buildings came down. And that tells you something."

A spokeswoman did not respond to a request for clarification Saturday about Trump's comments.

In a statement, Jersey City Mayor Fulop criticized Trump for his statements.

"Trump is plain wrong, and he is shamefully politicizing an emotionally charged issue," said Fulop. "No one in Jersey City cheered on September 11th. We were actually among the first to provide responders to help in lower Manhattan."

The Washington Compost "fact-checker" says it didn't happen either.

However, those claims contradict what was in the September 18, 2001 edition of the Washington ComPost. (FreeRepublic) 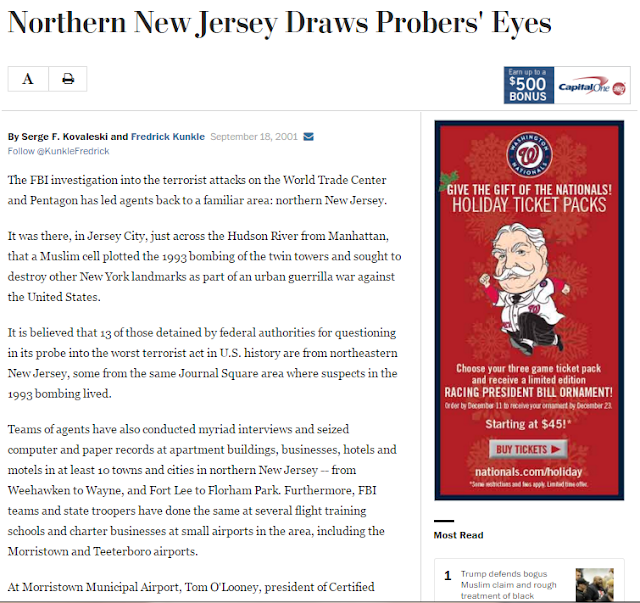 In Jersey City, within hours of two jetliners' plowing into the World Trade Center, law enforcement authorities detained and questioned a number of people who were allegedly seen celebrating the attacks and holding tailgate-style parties on rooftops while they watched the devastation on the other side of the river. 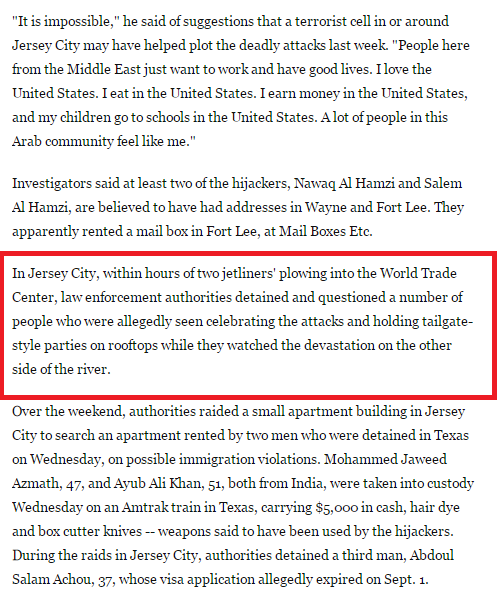 Not only that, but the Creeping Sharia website posted something I've heard about a couple of high-rise apartments around Alexandria, VA.

Down the street is a Saudi charitable front for al-Qaida once run by bin Laden’s nephew. The U.S. branch of the dangerous Muslim Brotherhood is in the same office park. Farther down in Alexandria is the Saudi madrassa (MIM note: Islamic Saudi Academy) that’s graduated several terrorists, including the al-Qaida operative who plotted to assassinate President Bush.

But apparently, everyone who saw it must have imagined it, according to the gatekeepers of information.
Posted by MaroonedinMarin at 5:30 AM