In September 2012, the would-be celebrity who lives in the White House, Richard Milhous Hussein-Obama, said the following on David Letterman's late night show in a rebuke to Mittens Romney's "47 percent" statement secretly taped at a fundraiser.

"If you want to be president you have to work for everybody not just for some."

It was good campaign rhetoric, but a statement that Obama time and time again has not lived up to. He's doing it once again.

Polls show that a majority of Americans, especially after the Paris jihadist attacks, oppose the resettlement of refugees from Syria in the United States, given how some of the jihadists who attacked Paris posed as refugees. In keeping with that statistic, almost thirty states, led by Texas Governor Greg Abbott, have opposed resettlement in their states. 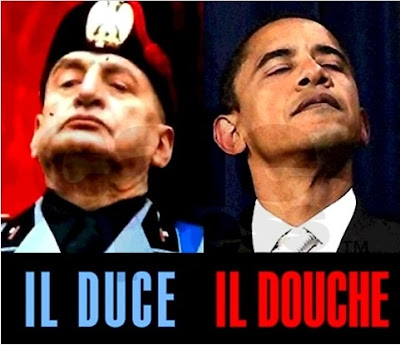 But do you think the person who swore an oath to defend the Constitution and protect America would take this seriously? No he doesn't and now he's acting like a petty, tin-pot dicktator by threatening these states (Fox News).


The Obama administration warned states over the Syrian refugee crisis Wednesday, telling them in a letter they do not have legal authority to refuse the refugees, and states that do not comply may be subject to enforcement action.

The letter, from the Office of Refugee Resettlement (ORR), told state resettlement officials that they may not deny benefits and services to refugees based on their country of origin or religion.

“Accordingly, states may not categorically deny ORR-funded benefits and services to Syrian refugees,” the letter, dated Wednesday, says. “Any state with such a policy would not be in compliance with the State Plan requirements, applicable statutes, and their own assurances, and could be subject to enforcement action, including suspension and termination.”

The letter went on to say that the 1964 Civil Rights Act prohibits discrimination based on race and national origin in all programs that receive federal financial assistance.

“Thus, it is not permissible to deny federally funded benefits such as Medicaid or TANF to refugees who otherwise meet the eligibility requirements,” the letter says.

The letter came after more than two dozen governors, mostly Republicans, announced they would resist efforts to resettle Syrian refugees in their states in light of the November 13 terrorist attacks in Paris, and fears that ISIS militants could use the controversial program to infiltrate the U.S.

This is tantamount to blackmailing the states, especially when it involves the security of our nation. It is also a huge encroachment of separation of powers. But Obama is familiar with that (see: executive amnesty), and no one is willing to stand up to him over it.

This isn't the only time Obama has acted like a dicktator. His Regime has threatened states who sought to defund Planned Infanticide Parenthood. Why? Because Obama has ridden to power thanks to the abortion-on-demand lobby, who are big supporters politically and financially. It's an issue he can use as a strawman argument against his opponents and try to appeal to radical feminists.

But do you think Obama will stop or impose similar penalties on "sanctuary cities" who do so in violation of federal law? No! Because Obama does not represent all of America. He only represents illegal aliens, Muslims, racial grievance groups and any other group who he can pit against another...all for the sake of political expediency.

Notice too, when this nation, or the states, or citizens, dare to reject him, Obama acts like a petulant little man-child, threatening retribution, all because he's a raging narcissist still wounded by his father and mother (in many ways) abandoning him as a child, with his only role model being a Communist (Frank Marshall Davis) who fed into his anger and resentment.

And our security hangs in the balance.
Posted by MaroonedinMarin at 10:11 AM