Ben Carson Nails The Media: "The American People Are Waking Up To Your Game"

Like Donald Trump, Ben Carson is not my first choice in the GOP Presidential primary for 2016. However, I'd have no problem voting for him if he were the nominee in 2016.

Here's one reason. Unlike other GOP establishment types who are willing to let the media walk all over them, the mild-mannered Carson still takes on the media in a way that not only resonates, it illustrates the media hypocrisy.

Like he did last night, after a smear story by Politico claimed Carson lied about being offered a scholarship from West Point. Carson took the media on and threw it back in their faces, showing them he won't play their game (The Blaze).

A reporter asked, “Why do you think they are?”

“Why are you raising it?” a reporter asked.

He added, “Hold on one second. You are saying that something that happened with the words ‘a scholarship was offered’ is a big deal, but president of the United States, his academic records being sealed is not? Tell me how there is equivalency there!”

And another thing, how come it is safe for liberals and media liberals to attack Carson racially, compared to how just a policy disagreement with Obama is called "racist" or "dog whistle racism." Yet a liberal professor can call Carson a "coon," while others can call him a "token" and a "safe negro." 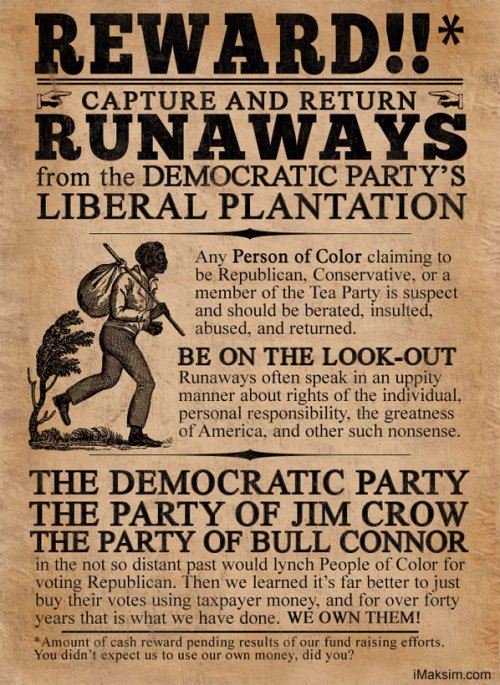 Because liberals fear Carson, and though they won't admit it, see him as a "runaway negro," someone who left the plantation and they fear him being uppity will cause others to leave the plantation. In today's case, the Democrat-Liberal Victimization Plantation. Because once the dependence on liberal politicians is gone, they are out of business, and Ben Carson threatens that.

Which is why liberals want to see him destroyed.
Posted by MaroonedinMarin at 4:13 PM