Remember how, during the 2012 GOP Primary, all the GOP-establishment talking heads, pseudo conservatives, and the Republican Party consultant class (ie Porky Pig Karl Rove) told us Mitt Romney was the "most electable" of the GOP field.

Even the dingy Ann Coulter dumped her Tony Soprano-esque boyfriend Chris Christie for Mittens, even though she'd stated at CPAC 2011 if Romney was the nominee we'd lose.

Yet, the Romney campaign and the GOP establishment unleashed Obamaesque attacks on all the other GOP candidates, and even those who were seen as potential candidates (ie Sarah Palin), because it was Mitt's turn.

Though many of us, including yours truly, opposed Romney, we supported him in the general election, because the thought of four more years of Obama was more than we could handle.

Turns out, we who were hesitant and questioned Romney were right afterall. Far from being the "severe" conservative he claimed to be at CPAC 2012, Romney and the GOP-establishment played a scam on the nation that helped the worst President in US history gain a second term. 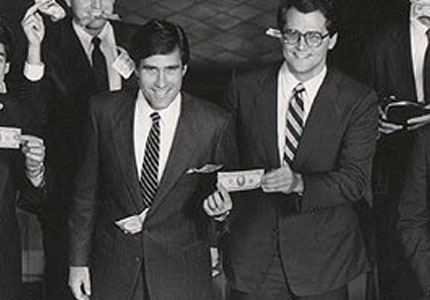 The proof in the pudding? Not only did Romney show how much of a phony he was when it came to opposing Obamacare, he went over to the enemy, being Obama henchman David Axeldouche, to attack conservatives and conservative media (Breitbart).

As the Republican establishment is trying convince Rep. Paul Ryan (R-WI) to run for House Speaker, Romney told David Axelrod on a recent “The Axe Files” podcast that the “extremes within our respective parties are having a louder and louder voice and demanding more attention” and “immediate action” as opposed to more “collaborative action.”

Romney said this phenomenon flows in part from the “change in the world of media.”

“There was a time when we all got the news with the same facts, if you will,” he said. “We had three networks we watched for the evening news. Most of us got newspapers. Everybody in the middle class got a newspaper, so we got the same facts whether we agreed or not with them.”

Now, according to Romney, people “get their news on the web” and “they tend to read those things which they agree with.” He said people are “not seeing the other side” and “not even getting the same facts” while “we have commentators” on left-leaning and right-leaning cable news channels “who are hyperbolic in expressing their views on issues.”

The article goes on, with Romney lamenting that this has induced more liberals in the Democratic Party and people “who feel they are more insurgent” - ie: conservative” in the GOP as opposed to gathering  in “the center of the party.”

“And I think that divisiveness is one of the things that has led to Washington having such a hard time getting things done……There are some in our party who think the best approach is throwing bombs. The problem with bomb throwing so far is that most of the bombs have landed on our own team. That doesn’t help.”

Newsflash, Mittens, it's not 1975 anymore. Even then, our nation was misinformed by that pinko Walter Chronkite, whose opining about how the Tet Offensive in 1968 was a disaster, helped the Vietcong and turned sentiment against the war.

But do you notice, he never goes after the far-Left, it is only the conservative "insurgents" he attacks. It's always conservatives who have to "move-to-the-center" and surrender our principles. Government's jobs is not to "get things done," Mittens, it's to get out of the lives of everyday Americans and to uphold the Constitution. There cannot be compromise with those who want to destroy the principles this nation was founded upon.

Think of this too, Romney is willing to sit for a pow wow with a scumbag like Axelrod who allegedly made up a story about Mitten's concession call on Election Night and racial understones that were supposedly made.

You know what "moving to the center does" Mittens? It means you're going to become roadkill. You don't negotiate with or try to make nice with the enemy like Axeldouche and Obama, who want to destroy this country by tearing it apart with their divisive, Alinsky tactics.

Thanks for nothing, Mittens! No go away you scam artist!
Posted by MaroonedinMarin at 6:14 PM