One of the old, worn out adages by the Left has been to smear conservatives, Republicans, and Tea Party types as racists.

Remember how the Democrats, liberal media, NAACCP and Congressional Black Caucus conspired to slander Tea Party protesters as racists who shout the N-word at blacks in Congress?

But it's liberals who are the ones who engage in outright, overt racism.

“If only there was a ‘coon of the year’ award…” Professor Butler tweeted in response to another tweet linking to a Sports Illustrated article in which Carson was quoted defended the right of NASCAR fans to fly Confederate flags during races. 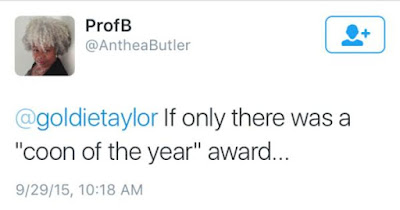 “Swastikas are a symbol of hate for some people too … and yet they still exist in our museums and places like that,” Carson observed during the event in North Carolina with NASCAR legend Richard Petty. “If it’s a majority of people in that area who want it to fly, I certainly wouldn't take it down,” he added, noting that NASCAR races are held on private property.

The word “coon” is an offensive term to slander Africans, deriving from the Portuguese word “barracoos,” which is a hut-like dwelling used to store slaves during auctions, according to Online Etymology.

In effect, then, Butler’s tweet insinuated that Carson is a metaphorical slave who belongs in a wooden shed.

This is not the first time the religion studies professor made a racially charged comment on social media. Butler believes God is a “white racist...carrying a gun and stalking young black men” because George Zimmerman was found not guilty in the Trayvon Martin case, and also made bizarre remarks during the hype of Michael Brown’s death, referring it as a blood sacrifice.

Also worth noting is that Butler has tenure status, and once boasted that “I can’t get fired” over criticisms from the right, according to The College Fix.

Not only that, Michelle Malkin, who has endured an endless barrage of hate speech over the years, was attacked in a racially derogatory manner by a writer at liberal Salon.com (Newsbusters).


Poor Gary Legum at Salon.com. How dare supporters of the right to keep and bear arms as clearly defined in the Constitution's Second Amendment push back against the gun control movement's cynical exploitation of Thursday's Roseburg, Oregon massacre?

...Now to some of Legum's execrable content (some language cleaned up; links are in original; bolds and numbered tags are mine):

Often in the wake of an act like Thursday’s, I have suggested that the anti-gun control crowd have the decency to shut the f__ up for a day or two. [1] That is because for all the caterwauling of gun control advocates, it seems clear to me that they have lost the fight. Contrary to the right-wing paranoia, the Second Amendment is in no danger of being repealed. It is nearly impossible to push even the mildest gun control measures through legislatures at either the federal or state level.

... But no. The news barely broke before conservatives were all hands on deck to find scapegoats and spout the usual litany of talking points. [2] You couldn’t throw a rock without hitting a #tcot saying the aftermath of the shooting is too soon to talk about gun control measures because that would be “politicizing” a tragedy.

... National Review’s Charles C.W. Cooke was quick to blame the media and second the idea that reporting on shootings leads to copycats. Right-wing rage monkey Michelle Malkin suggested gun control advocates refrain from commenting on breaking news of shootings, for reasons that elude all reasonable explanation. [3] Does she think we’re going to find out the shooter used a marshmallow gun or actually stabbed all his victims with a grapefruit spoon?

And the Left says nothing about this hypocrisy.
Posted by MaroonedinMarin at 3:27 PM

I am curious, when she is not calling our peaceful neighbors demeaning, despicable names, has *Professor Anthea Butler ever addressed America's expanding and shameful *National Epidemic of Child Abuse and Neglect,* aka *Poverty*, that for decades has deprived untold numbers of depressed children from experiencing and enjoying a safe, fairly happy American kid childhood.

Is Professor Anthea Butler aware that child victims of America's expanding and shameful *National Epidemic of Child Abuse and Neglect,* aka *Poverty*, often develop into angry, frustrated, unpredictable, emotionally depressed teens and adults lacking empathy and compassion for their peaceful neighbors, because their lives suck so why shouldn't their neighbor's lives suck too!

Does Professor Anthea Butler recognize there is a substantial population of young immature teen girls and women creating life before acquiring the skills, PATIENCE and means to properly raise, nurture and supervise a developing young child who matures into a fairly happy teen and adult enjoying safe streets to play on or travel.

Is Professor Anthea Butler one of many highly educated Americans who hold blameless young immature teen moms for failing and emotionally harming their children...while the police, criminal justice and correctional systems are charged with protecting peaceful people from depressed, angry, frustrated, unpredictable teens and adults who were victims of EARLY childhood abuse and/or neglect at the hands of immature, impatient teen girls, young women and/or irresponsible men?

Has Professor Anthea Butler ever asked herself, "Who is responsible for physically and/or emotionally traumatizing children to the point young kids believe their lives are not worth living?"

*"Perhaps it causes us to examine what we’re doing to cause some of our children to hate?"* (Applause.)

I am still waiting for Mr. Obama to provide the American people with an answer to his question.