Something Smells Fishy About The Story On The Irving, TX Kid Who Built "Clock" Mistaken For Bomb & Invited To White House

Make a clock that is mistaken for a bomb, get an invite to the White House (Washington ComPost).

Fourteen-year-old Ahmed Mohamed just wanted to get noticed by his teachers.
Instead, he got arrested.

In an incident that has raised allegations of racism and made a Texas school district the target of online outrage, the ninth-grader was pulled out of school in handcuffs after a digital clock he built himself was mistaken for a bomb.

...And the story of Mohamed’s arrest has made its way across the Internet and all the way to the White House.

“I’m the person who built a clock and got in a lot of trouble for it,” the jittery and smiling ninth-grader said during a press conference outside of his home after his arrest became national news.

Messages of support from President Obama, Facebook CEO Mark Zuckerberg, Democratic presidential hopeful and former Secretary of State Hillary Clinton have buoyed the young man. He said on Wednesday evening that he was grateful for the support for his “movement” and he hoped to attend MIT.

...Mohamed, a self-assured kid with thick-framed glasses and a serious expression, had just started at MacArthur High School a few weeks ago. The Irving, Tex., ninth-grader has a talent for tinkering — he constructs his own radios and once built a Bluetooth speaker as a gift for his friend — and he wanted to show his new teachers what he could do. So on Sunday night, he quickly put together a homemade digital clock (“just something small,” as he casually put it to the Dallas Morning News: a circuit board and power supply connected to a digital display) and proudly offered it to his engineering teacher the next day.

But the teacher looked wary.

“He was like, ‘That’s really nice,’” Mohamed told the Dallas Morning News. “‘I would advise you not to show any other teachers.’”

During English class, the clock beeped, annoying his teacher. When he brought the device up to her afterward, she told him “it looks like a bomb,” according to Mohamed.
“I told her, ‘It doesn’t look like a bomb to me,'” he told the Dallas Morning News.

But the English teacher kept the clock, and during sixth period, Mohamed was pulled out of class by the principal.

“They took me to a room filled with five officers in which they interrogated me and searched through my stuff and took my tablet and my invention,” the teen said. “They were like, ‘So you tried to make a bomb?’ I told them no, I was trying to make a clock.”
But his questioner responded, “It looks like a movie bomb to me.”

Mohamed said that he was taken to police headquarters, handcuffed and fingerprinted. 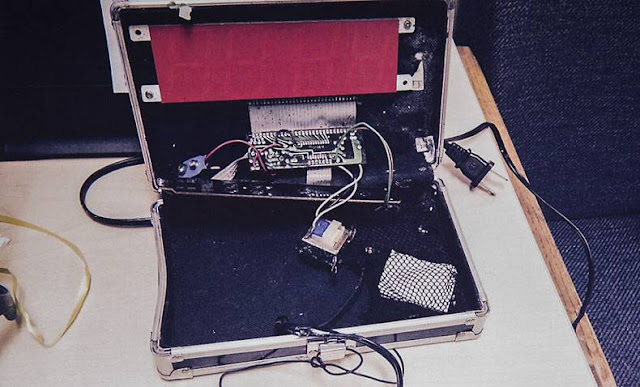 Was this box closed up?

Here's the problem I have. Number one...we live, or used to live, in a post 9/11 nation where we are told if we see a suspicious package, to let someone know. Something in a black box with a timer taken into a school? Use some common sense.

It could be a fair argument that the police and authorities may have overreacted, especially if this was checked out and there was no proof of a bomb or a detonating device. However, we cannot help but be suspicious of packages or items that look out of the ordinary.

Number two...would this kid be getting an invite to the White House and this story been such a phenomenon if the kid's name was Chad Johnson? I doubt it.


Let’s admit up front that it is stupid that a ninth grader got arrested for making a clock and bringing it to school. They thought it was a bomb. I will not imply motives to the kid bringing his cool invention to school. I would note, however, it was a government school and we can probably further indict public schools for it.

But I have no doubt a PR firm helped push this story.

Hell, we’re still waiting on the President to comment on students getting sent home from a public school for wearing American flag shirts. But he and Hillary Clinton have both already chimed in on this.

Lose your son in war? Expect a post card from the President.

Get arrested for a clock at school? Expect a Presidential press conference.

How about this? When have Spencer Stone, Alek Skarlatos, and Anthony Sadler, three Americans who stopped a jihadist on a train to Paris from going on a killing spree, gotten an invite from the White House? The best they got was a phone call from Barack Hussein Obama (probably from the 18th hole).

When was the last time a family or child of a police officer killed by some gang-banger "BlackLivesMatter terrorist was invited to the White House?

But a kid with an Islamic last name makes a clock mistaken for a bomb, and the red carpet is rolled out for him by Obama.

Erickson also quoted a story from the Dallas Morning News, stating the kids father,
Mohamed Elhassan Mohamed, "immigrated from Sudan and occasionally returns there to run for president." Mohamed, who also got attention for debating that Florida pastor who burned a Koran, was quoted as saying, “But because his name is Mohamed and because of Sept. 11, I think my son got mistreated.”


And then note that the Council on American-Islamic Relations got involved. They have a close relationship with the White House.

So the story breaks on Monday and the President is already talking about it on Wednesday drawing attention to something in Texas right before the Republican Presidential Debate.

Can we all just admit a public relations firm, on behalf of CAIR, made sure this story got out as quickly as possible and that the White House would note it and comment on it.

And I’ll just ignore the part of the story only trickling out now that apparently the kid put the clock in suitcase under his desk where it started beeping, disrupting the class.

The arrest was dumb. But everything else following it was no doubt orchestrated. An Islamic activist’s son takes electronic circuit boards as a clock to school a few days after September 11th, he gets arrested in a city where there are already charges of Islamophobia, and within 48 hours it is a national story with the President weighing in.

Remember what happened earlier this year in Irving, TX?


Tempers flared at the Irving City Council meeting as supporters and protesters clashed over the city’s support of the Texas House Bill 562, the so called “anti-sharia” law.

The yelling and booing began just minutes into the public comment forum.

“Sharia law is Islam. And Islam’s goal is to immigrate, assimilate and annihilate,” said one speaker.

Those words outraged audience member Laith Albataineh who began yelling back at the speaker in outrage.

“That is offensive. That is Offensive! Show some respect. You do not call me religion that,” yelled Albataineh.

Like many others in the crowd on Thursday, Albataineh is frustrated with Mayor Beth VanDuyne and the city council members who voted to pass a resolution in support of HB 562. The bill prohibits the use of foreign law.

This all happened after rumours came about that there was an Islamic tribunal established in Irving, TX. The hottie mayor of Irving, Beth Van Duyne, stood up to the attacks and slurs on her after she came out against a tribunal.

Like I said, something smells here.
Posted by MaroonedinMarin at 5:33 PM