Ahmed Didn't Invent That Clock That Was Mistaken For A Bomb...It Was From Radio Shack

Just like the Bush National Guard memos, it takes people on the Internet with a bit of curiousity to do the digging that journalists don't want to do, because they are too busy pushing an agenda.

Like the "clock" which was "invented" by Ahmed Mohamed of Irving, TX, which was mistaken for a bomb and his activist father got the grievance mongers at Hamas-linked CAIR to scream "Islamophobia" just to go after the mayor and others in that town who have fought against Sharia-law. It all got him an invite from the White House to visit the guy who said he'd "stand with them should the political winds shift in an ugly direction."

Yeah, here's more proof this was a set up. Ahmed the teenage genious inventor didn't invent the clock (Artvoice).

I found the highest resolution photograph of the clock I could. Instantly, I was disappointed. Somewhere in all of this – there has indeed been a hoax. Ahmed Mohamed didn’t invent his own alarm clock. He didn’t even build a clock. Now, before I go on and get accused of attacking a 14 year old kid who’s already been through enough, let me explain my purpose. I don’t want to just dissect the clock. I want to dissect our reaction as a society to the situation. Part of that is the knee-jerk responses we’re all so quick to make without facts. So, before you scroll down and leave me angry comments, please continue to the end (or not – prove my point, and miss the point, entirely!)

For starters, one glance at the printed circuit board in the photo, and I knew we were looking at mid-to-late 1970s vintage electronics. ...So I turned to eBay, searching for vintage alarm clocks. It only took a minute to locate Ahmed’s clock. See this eBay listing, up at the time of this writing. Amhed’s clock was invented, and built, by Micronta, a Radio Shack subsidary. Catalog number 63 756.

For one last bit of confirmation, I located the pencil box Ahmed used for his project. During this video interview he again claims it was his “invention” and that he “made” the device – but the important thing at the moment, at 1:13, we see him showing the pencil box on his computer screen. Here it is on Amazon, where it’s clearly labeled as being 8.25 inches wide. Our eBay seller also conveniently took a photo of the clock next to a ruler to show it’s scale – about 8 inches wide. The dimensions all line up perfectly.(photo from ArtVoice blog post) 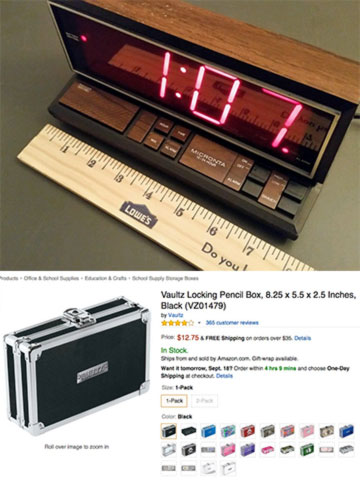 So there you have it folks, Ahmed Mohamad did not invent, nor build a clock. He took apart an existing clock, and transplanted the guts into a pencil box, and claimed it was his own creation. It all seems really fishy to me.

If we accept the story about “inventing” an alarm clock is made up, as I think I’ve made a pretty good case for, it’s fair to wonder what other parts of the story might be made up, not reported factually by the media, or at least, exaggerated.(my emphasis)

I refer back again to this YouTube video interview with Ahmed. He explains that he closed up the box with a piece of cord because he didn’t want it to look suspicious. I’m curious, why would “looking suspicious” have even crossed his mind before this whole event unfolded, if he was truly showing off a hobby project, something so innocuous as an alarm clock. Why did he choose a pencil box, one that looks like a miniature briefcase no less, as an enclosure for a clock? It’s awful hard to see the clock with the case closed. On the other hand, with the case open, it’s awful dangerous to have an exposed power transformer sitting near the snooze button (unless, perhaps his invention was to stop serial-snooze-button pressers by giving them a dangerous electrical shock!)

So again, I’m pointing all this out – about the specifics of the clock – not to pick on the poor kid. I’m picking on us, our culture, and our media. I don’t even care about the clock itself at this point.

If we stop and think – was it really such a ridiculous reaction from the teacher and the police in the first place? How many school shootings and incidents of violence have we had, where we hear afterwards “this could have been prevented, if only we paid more attention to the signs!” Teachers are taught to be suspicious and vigilant. Ahmed wasn’t accused of making a bomb – he was accused of making a look-alike, a hoax. And be honest with yourself, a big red digital display with a bunch of loose wires in a brief-case looking box is awful like a Hollywood-style representation of a bomb. Everyone jumped to play the race and religion cards and try and paint the teachers and police as idiots and bigots, but in my mind, they were probably acting responsibly and erring on the side of caution to protect the rest of their students, just in case. (my emphasis, MIM) “This wouldn’t have happened if Ahmed were white,” they say. We’re supposed to be sensitive to school violence, but apparently religious and racial sensitivity trumps that. At least we have another clue about how the sensitivity and moral outrage pecking order lies.

Meanwhile, Obama snubs mothers whose sons have been killed by illegal aliens, but will invite this kid, the son of an Islamic activist, or The BlackLivesMarrers scum to the White House.
Posted by MaroonedinMarin at 7:44 PM