“He’s not a war hero,” said Trump. “He was a war hero because he was captured. I like people who weren’t captured.”

The remarks, which came after days of back-and-forth between McCain and Trump, were met with scattered boos.

McCain, a former Navy pilot, spent roughly five-and-half years in a notorious North Vietnamese prison known as the “Hanoi Hilton,” where he was repeatedly tortured. He spent two of those years in solitary confinement.

At a press availability following his remarks, Trump denied saying that McCain isn’t a war hero and said, “If somebody’s a prisoner, I consider them a war hero.”

He also continued his attacks on the Arizona senator, saying, “I think John McCain’s done very little for the veterans. I’m very disappointed in John McCain.” 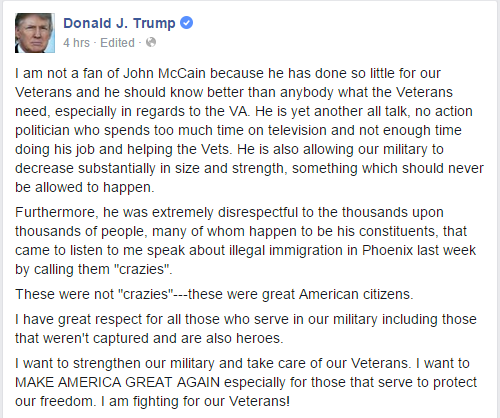 First of all, John McLame is not blameless. He called people who are concerned about illegal immigration (which he supports) who went to Trump's event "crazies." He's also called the Tea Party "wacko birds" after he used the movement in 2010 to get re-elected to the US Senate. The GOP should have called on McLame to have more class and not attack citizens.

Trump had every right to go after McLame for the "crazies" insult. Attacking John McLame's record as a RINO who has done nothing but act like the liberals best useful idiot is one thing, but attacking POWs is below the belt and uncalled for.

But Trump wasn't done sticking his foot in his mouth today. (Daily Caller)...


Though Trump’s attack on the Republican Arizona senator is drawing most of the headlines from the Family Leadership Summit, Trump also gave an interesting answer when asked by moderator Frank Luntz whether he has ever asked God for forgiveness.

Watch the full video to see how Trump replied to what he admitted was a “tough question.” But the short of it is: nope.

Way to go, Donald! What a way to write off the vote of evangelicals and people who believe in traditional values.

The Trump campaign was last seen this afternoon, beached somewhere in Oregon.


Posted by MaroonedinMarin at 3:44 PM