Yesterday, this horrific video was released by the Center for Medical Progress of an undercover investigation into Planned Parenthood allegedly selling body parts from babies aborted in partial-birth abortions (YouTube -- WARNING, graphic discussion).

What is striking is Ms. Nucatola, sitting there, talking about selling body parts from aborted babies while eating lunch and drinking wine in such a non-chalant manner. I can't help but think of how soulless one would be to be able to do that.

Unfortunately, Planned Parenthood has it's defenders, since abortion is the sacred blood sacrament of the Religion known as Liberalism.

When the story broke early yesterday, there was a media blackout, as reported by Mollie Hemmingway at The Federalist. But that is starting to change now.

Also, the criminal front group funded by George Soro$ Media Mutters for America, defends the abortion group, using the "deceptive edits" argument. Never mind that an unedited video has also been released, and "deceptive edits" is what David Crock and Media Mutters have used against various conservative talk shows in an effort to drive them from the air.

You have to be soulless to defend this group, especially if you know the roots of Planned Parenthood and it's founder, Margaret Sanger (BlackGenocide.org).


It was in 1939 that Sanger's larger vision for dealing with the reproductive practices of black Americans emerged. After the January 1939 merger of her Clinical Research Bureau and the ABCL to form the Birth Control Federation of America, Dr. Clarence J. Gamble was selected to become the BCFA regional director for the South. Dr. Gamble, of the soap-manufacturing Procter and Gamble company, was no newcomer to Sanger's organization. He had previously served as director at large to the predecessor ABCL.

Gamble lost no time and drew up a memorandum in November 1939 entitled "Suggestion for Negro Project." Acknowledging that black leaders might regard birth control as an extermination plot, he suggested that black leaders be place in positions where it would appear that they were in charge, as it was at an Atlanta conference.

Sanger wrote the following back to Gamble.


"We should hire three or four colored ministers, preferably with social-service backgrounds, and with engaging personalities. The most successful educational approach to the Negro is through a religious appeal. We don't want the word to go out that we want to exterminate the Negro population, and the minister is the man who can straighten out that idea if it ever occurs to any of their more rebellious members." 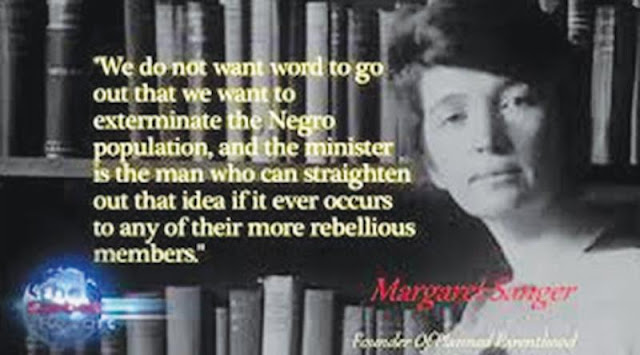 Sanger also spoke at a Ku Klux Klan rally in Silver Lake, NJ, in 1926, saying "I accepted an invitation to talk to the women’s branch of the Ku Klux Klan … I saw through the door dim figures parading with banners and illuminated crosses … I was escorted to the platform, was introduced, and began to speak … In the end, through simple illustrations I believed I had accomplished my purpose. A dozen invitations to speak to similar groups were proffered."


I admire Margaret Sanger enormously, her courage, her tenacity, her vision ... And when I think about what she did all those years ago in Brooklyn, taking on archetypes, taking on attitudes and accusations flowing from all directions, I am really in awe of her.

How can Hillary and other liberals claim #BlackLivesMatter and support Planned Parenthood? Do they not have a soul?
Posted by MaroonedinMarin at 6:11 PM