Fourteen days after the deadline was removed to reach a "nuclear deal" with the Islamist-terror state of Iran, the goal posts were moved again until a "deal" was announced early today (NY Slimes).


Iran and a group of six nations led by the United States said they had reached a historic accord on Tuesday to significantly limit Tehran’s nuclear ability for more than a decade in return for lifting international oil and financial sanctions.

The deal culminates 20 months of negotiations on an agreement that President Obama had long sought as the biggest diplomatic achievement of his presidency. Whether it portends a new relationship between the United States and Iran — after decades of coups, hostage-taking, terrorism and sanctions — remains a bigger question.

Mr. Obama, in an early morning appearance at the White House that was broadcast live in Iran, began what promised to be an arduous effort to sell the deal to Congress and the American public, saying the agreement is “not built on trust — it is built on verification.”

Mr. Obama made it abundantly clear that he would fight to preserve the deal from critics in Congress who are beginning a 60-day review, declaring, “I will veto any legislation that prevents the successful implementation of this deal.”

Of course it's not built on trust. How can we trust the security of this nation, and a deal made with an Islamist Regime who chants "Death to America" and "Death to Israel", to someone who looked America in the eye and said not only would our health care premiums go down $2,300, but we could keep our plans and our doctor?

But Obama and Kerry aren't at fault. Mark Levin had pointed out how the spineless RINOs in the US Senate, led by that eunuch Mitch McConnell, surrendered the treaty authority to Obama because the GOP is too afraid to stand up for our national security and that of our allies like Israel, because they're too afraid of being called racists. 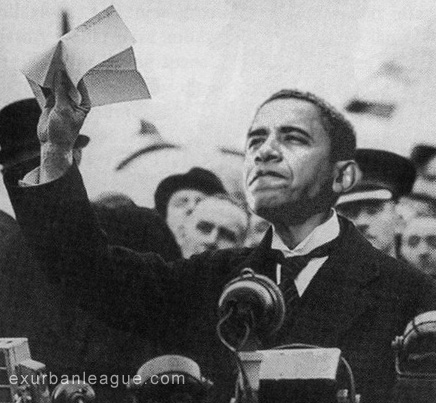 Which is why I say Obama and "Hanoi" John Kerry have out-Chamberlained Neville Chamberlain. Unlike the former British Prime Minister, whose "peace in our time" deal with Adolf Hitler in Munich in 1938 did not stop World War II, we have had numerous examples since the rise of the Iranian mullahs in 1979 (thanks to Dhimmi Carter) of how hostile Iran has been to the United States. Remember the US hostage crisis that lasted from November 1979 until moments after Ronald Reagan was sworn into office (because Iran knew they couldn't mess around with Reagan)? The terrorism Iran has funded against the United States in the years since? The threats to wipe Israel off the map? Chamberlain was naive, Obama and Kerry operate out of a hatred for the United States (and Israel), as well as a sympathy for America's enemies, be them Communist or Islamists.

The world will be less safe, and rushing towards a nuclear world war, because the fragile ego of a narcissistic man-child who also thinks America needs to be brought down a few notches, had to be satisfied.
Posted by MaroonedinMarin at 2:54 PM