“They that can give up essential liberty to obtain a little temporary safety deserve neither liberty nor safety.” - Benjamin Franklin

"An appeaser is one who feeds a crocodile - hoping it will eat him last." - Winston Churchill

"Alexander Hamilton said, 'A nation which can prefer disgrace to danger is prepared for a master, and deserves one.' Now let's set the record straight. There's no argument over the choice between peace and war, but there's only one guaranteed way you can have peace—and you can have it in the next second—surrender." - Ronald Reagan

"The root word for Islam is 'al-Silm,' which means 'submission' or 'surrender.'” - TheReligionOfPeace.com

The Islamofascist group ISIS has now gone beyond taking responsibility for the attempted attack on the Mohammed Cartoon event in Garland, TX on Sunday and is threatening Pamela Geller, claiming to have soldiers in 15 states (NY Daily News).


ISIS appears to declare war on anti-Muslim (sic) blogger Pamela Geller on Tuesday in an ominous online message claiming it has fighters across America ready to attack "any target we desire."

The threat, posted on anonymous message board JustPasteIt, singles out Geller, who helped plan a Prophet Muhammad cartoon contest that was attacked by two gunmen in Garland, Texas, over the weekend. ISIS claimed responsibility for the shooting early Tuesday, marking the first time the terror group called an American attack one of its own.

The chilling Tuesday post also boasts of ISIS having "71 trained soldiers in 15 different states ready at our word to attack." It specifically names Virginia, Maryland, Illinois, Michigan and California.

"The attack by the Islamic State in America is only the beginning of our efforts to establish a wiliyah (authority or governance) in the heart of our enemy," the message reads.

But from the reaction of same NY Daily Snooze, some on the allegedly conservative Fox News (Martha McCullum, Bill "Loofah Boy" O'Reilly), Donald "Sideshow Bob" Trump, and usual suspects like the drunk Chris Matthews, are acting like Geller is the terrorist.

Here's the New York Slimes, who have been willing accomplices to the undermining of the War on Terrorism during the Bush Years.


There is no question that images ridiculing religion, however offensive they may be to believers, qualify as protected free speech in the United States and most Western democracies. There is also no question that however offensive the images, they do not justify murder, and that it is incumbent on leaders of all religious faiths to make this clear to their followers.

But it is equally clear that the Muhammad Art Exhibit and Contest in Garland, Tex., was not really about free speech. It was an exercise in bigotry and hatred posing as a blow for freedom.

That distinction is critical because the conflicts that have erupted over depictions of the Prophet Muhammad, most notably the massacre of staff members at the French satirical weekly Charlie Hebdo in January by two Muslim brothers, have generated a furious and often confused debate about free speech versus hate speech. The current dispute at the American chapter of the PEN literary organization over its selection of Charlie Hebdo for a freedom of expression courage award is a case in point — hundreds of PEN’s members have opposed the selection for “valorizing selectively offensive material.”

Charlie Hebdo is a publication whose stock in trade has always been graphic satires of politicians and religions, whether Catholic, Jewish or Muslim. By contrast, Pamela Geller, the anti-Islam campaigner behind the Texas event, has a long history of declarations and actions motivated purely by hatred for Muslims.

Whether fighting against a planned mosque near ground zero, posting to her venomous blog Atlas Shrugs or organizing the event in Garland, Ms. Geller revels in assailing Islam in terms reminiscent of virulent racism or anti-Semitism.

Are you kidding me? The way these gutless, cowardly liberals at the New York Slimes act, they'd think Pamela Geller (who is Jewish for your information, New York Slimes) just woke up one day and decided to attack Islam and Mohammed just for the hell of it. Never mind the horrors that we witnessed on 9/11/01, but of course that day has long been forgotten thanks to the current Regime in DC, who have made 9/11 a day to take our your neighbor's trash or paint the local community room, instead of remembering the final phone calls from the hijacked planes and those trapped in the World Trade Center, or why "Let's Roll" and the courage of the passengers of United 93 is significant.

Have all these media figures forgotten how Islamists have been at war with the US even before 9/11? Remember the Iran Hostage Crisis? Remember how Iran has been linked to the murder of our Marines in Beirut in 1983 and the Hezbollah kidnappings of Americans in the 1980s? I guess we as a nation have, since their Dear Leader Obama and his thin-skinned ego are so desperate for a legacy he'll make a nuclear deal with them. Never mind how ISIS are beheading and crucifying Christians in the Middle-East in the name of Islam, and you don't hear a word of outrage from Mr. Leg Thrill Chris Matthews, the New York Slimes or the Daily Snooze.

I'm not alone. Steven Crowder has had it with these Islamo-apologists and the cowards.

Brent Bozell of the Media Research Center does a great job of illustrating the doubled standard by these liberals.


Activists like Geller and her partner Robert Spencer are making a provocative point about how free speech is being uniquely curtailed out of sensitivity to Muslims, who apparently "earn" this sensitivity by being violent or making threats of violence. Liberals and their media outlets have no such sensitivity toward Christians or Jews.

Freedom of speech, not religious sensitivity, was the mantra for the media when the National Endowment for the Arts subsidized the maker of "Piss Christ" in the 1990s, as it was when museums hosted Chris Ofili's dung-spattered "art" work on the Virgin Mary, as it was when the National Portrait Gallery promoted a video of a crucifix with ants crawling over the body of Christ.

But freedom of speech for criticizing Islam? There's apparently no room for that in America. They won't even show the cartoon.

And who was their source, anyway? The Southern Poverty Law Center -- yes, that group that has also labeled the Family Research Center a "hate" group for supporting traditional marriage, leading to an assassin using their "hate map" to go to FRC's building and open fire, seriously wounding a security guard, with the intent to kill as many staff as possible, before being subdued.

And it's pretty pathetic when a vile cretin like Bill Maher makes more sense about the violence Islamists will show toward anyone who draws a cartoon of Mohammed than some of the alleged conservatives on Fox News (from 2010 - language warning).


And let me address this to all you liberals (and scaredy-cat conservatives) attacking Pamela Geller as a bigot, a hate-monger, etc. You claim to be such champions of free speech and free expression. You only care about mocking Christians, Jews or people who are conservative, while calming to oppose theocracy, but you by proxy support and act as apologists for a "religion" that is theocratical in nature.

You claim to be the best friends of homosexuals and women, but you look the other way at how women are treated in the Muslim world (stonings, execution).

Look at this image below. This is what Iran, whom Dear Leader Obama and "Hanoi John" Kerry are so eager to make a nuclear deal with, does to homosexuals in that Islamic state. 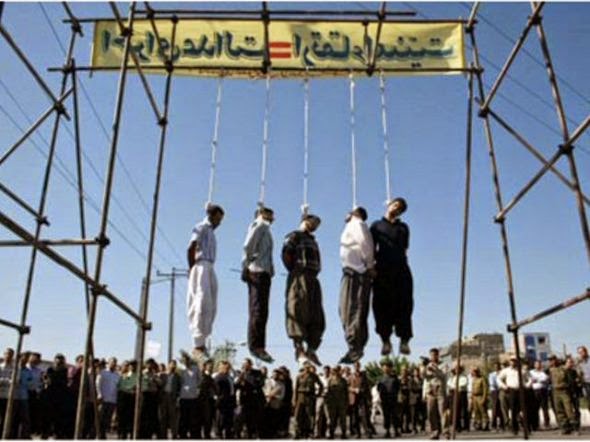 or what ISIS does to gays...

and yet you act as apologists for these Islamofascists by attacking Pamela Geller and act like she's the bigger enemy?  No! She's not the problem. It's you people, because you're so blind to the bigotry of these Islamists who want to destroy Israel and the West that you live under the delusion (just like Europe did in the 1930s) that if we just appease them and understand them we can "co-exist."  All that thinking will do is lead to an even worse atrocity.

Oh, and by the way, here is the winning cartoon, drawn by Bosch Fawstin, a former Muslim. 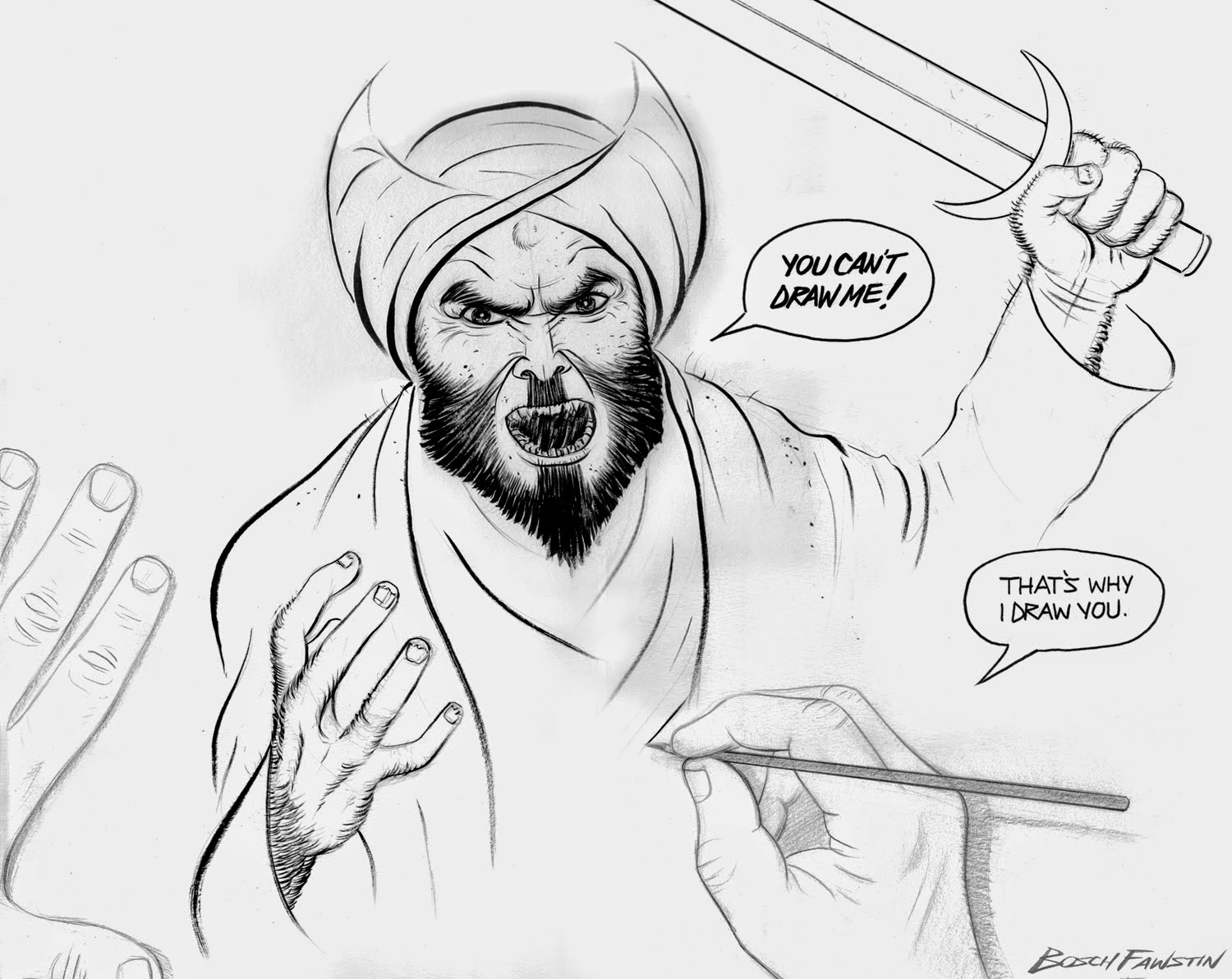 Posted by MaroonedinMarin at 6:32 PM