B.B. King Passes On, An American Icon and Influence To Many Musicians

Those of us who love music, especially blues music, woke up to sad news yesterday morning, as Riley B. (B.B. King) passed away Thursday night in Las Vegas, NV. He was 89. 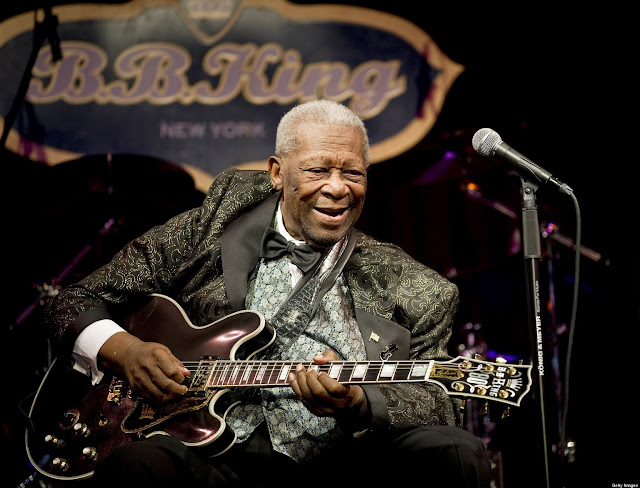 Name just about any modern guitarist today, and they'll probably tell you how B.B. King influenced them, like Eric Clapton, who called King "a beacon for all of us."

Clapton's comments were echoed by my friend Jimmie Vaughan, another great blues guitarist who (along with his brother, the late Stevie Ray Vaughan) was influenced by King. Vaughan appeared on (excuse the source) Alex Jones' radio show to talk purely about King and his influence.

Among my generation, many came to know of B.B. King by his appearance with U2, "When Love Comes To Town." Don't get me wrong, I've always liked the song, but what really got me into B.B. King was what Clapton in his video, as well as SRV and others had referenced in print interviews, the live album "Live at the Regal." When I was living in Austin, TX in the early to mid-1990s, I heard the version of "Sweet Little Angel" on the hip radio station KGSR 107.7. Being a semi-pro blues guitarist at that time (I still play today), I said "I have to get this CD."

I'd recommend this, as well as "Live At Cook County Jail," and "Live at San Quentin" as other great CD's for one to really get hooked on the man and his music.

Not long after, in September 1995, I saw B.B. King in concert for the first time at the Frank Erwin Center in Austin. He was on the bill with Etta James (who cancelled due to illness days before), Elvin Bishop, Jimmie Vaughan and the Magic Dick/J. Geils Bluestime review. This show took place just as King turned 70. From my recollection, he stood for half the show and sat for the last half, in which he brought Vaughan out to play some and reminisce about Stevie Ray.  I was blown away by his voice, his guitar tone, and just his big-heartedness. He was genuine, the real-deal.

After the show, those of us who were sitting near the stage had the opportunity to come up and see if we could catch pins of his guitar "Lucille" being thrown into the area. I was near the stage but was unable to get a pin, as he ran out. However, since he was standing in front of me, I stuck my hand up, he reached down and shook hands with me. To say I was awestruck was an understatement. It was one of the rare times I got to have contact with a musical hero and influence.

Rest in Peace B.B.! You won't be forgotten.
Posted by MaroonedinMarin at 4:56 PM