#Hillary2016: Touts Herself As Obama 3rd Term, Will "Captain Jack" Accompany Her Announcement?

Tomorrow is supposed to be the big day, that Hillary Rotten Clinton is supposed to throw her vase pantsuit into the ring for the Democrat nomination to replace Richard Milhous Obama.

Of course, Hillary Rotten is a fellow disciple of Saul Alinsky, whom Obama taught classes on as a community organizer. Someone must have hacked into her private server, because all we're seeing are details about how she will announce, and her stategery (Newsmax).


Hillary Clinton plans to build her planned quest for the 2016 Democratic presidential nomination on a risky strategy that touts a "new chapter" that builds on President Barack Obama's efforts and embraces her 2008 opponent as a key ally and adviser.

Clinton, 67, who is expected to announce her candidacy on Sunday, "is proud of what was accomplished, both as President Obama’s partner on critical issues of national security, and on the progress made on the domestic front," her spokesman, Nick Merrill, told The New York Times.

Merrill added that Clinton's campaign, "would be about laying out her own vision for tackling our toughest challenges."

The Times sums up the dilemma facing Clinton this way: "How can she run for president as her own person, without criticizing the sitting president she served — while her Republican opponents will be working to demonize them both?"

The former secretary of state can take little credit for many of what Obama considers as his strongest domestic accomplishments — Obamacare, for instance — and she opens herself to widespread attacks regarding such foreign policy issues as Israel, Iran, and Russia, the Times reports.

Well, if she wants to build on the Obama legacy and foreign policy "successes", maybe this is how she should make her 2016 announcement, because it is her and Obama's bloody legacy. 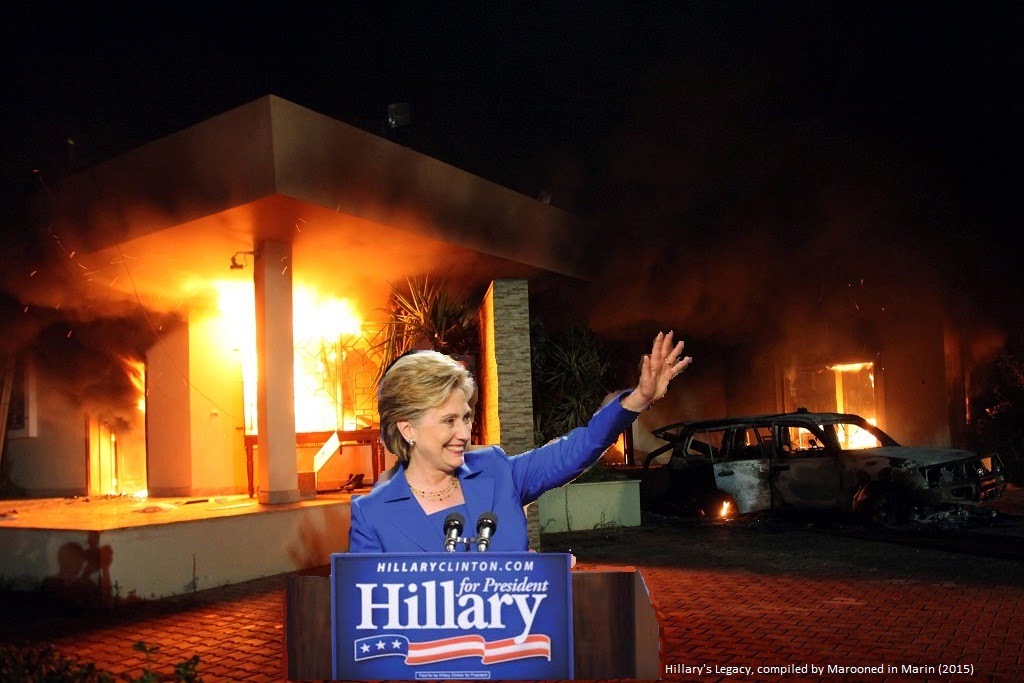 A foreign policy where savages from the seventh century behead, crucify and commit other atrocities, but we have to "empathize" with them? Right, all Hillary will do will finish what Obama started, the complete destruction of America.  Don't romanticize the 1990s, because Hillary ain't Bill, she is a Leftist ideologue. You could look at Bill and think he was a likable character (slimy guy that he was), but Hillary has the "ex-wife from Hell" coldness.

The lyrics in question:


Actually, in a sense, a Hillary campaign is like more of what we have had for the last six years of Obama, in the sense that you can replace racism for sexism and that's all she has to run on, and the media will cover for her. Attack Hillary and you're a sexist, male-chauvinist who probably beats his wife and wants women to die from back-alley abortions. Get ready, because that will be the mantra, simply more of the liberal politics of identity and cult of personality.  Cue up the ending of "Captain Jack" by Bill Joel again, because, in a sense it puts a perspective the mindset of the Obama/Hillary sycophants--it is like a drug.


So you play your albums and you smoke your pot
And you meet your girlfriend in the parking lot
Oh, but still you're aching for the things you haven't got,
What went wrong

And if you can't understand why your world is so dead
And why you've got to keep in style and feed your head
Well, you're twenty one and still your mother makes your bed
And that's too long

Never mind that Obama (and Hillary's) ideas haven't worked, there's more despair, more cynicism and more division. Liberals can never admit they are wrong. They just look for the next cult-like figure to worship in the hopes they will make their lives better, and try to give meaning to a life at the altar of big government.

Posted by MaroonedinMarin at 8:33 PM