I got wind of this yesterday from some teachers I know in the Fairfax County Public Schools, who now appear to want quantity (or equality) instead of quality (Washington ComPost).


The Fairfax County schools administration is considering sweeping changes to the grading system for middle school and high school classes that could help struggling students keep their grades up.

In a message sent to thousands of teachers Tuesday, Deputy Superintendent Steven Lockard detailed a series of proposals under consideration to revamp how teachers hand out grades to students and to standardize exam scores across the county.

The changes could have widespread impact in the school system, affecting students’ chances of getting into college and how teachers handle homework and tests. Under current rules, high schools in Fairfax have the flexibility to decide grading scales and methods. For example, an F could equal a zero at some schools but could be scored as 50 percent at others.

“It is time to examine our current grading policies in an effort to ensure that we have consistent and equitable practices throughout our middle and high schools,” Lockard wrote.

Excuse me, Mr. Lockard, all this talk about "equitable practices" is nothing but pure, feel-good liberalism on display.  That's the same kind of mindset that says "we can't have any losers, so, let's give everyone a participation certificate to make everyone feel like a winner.

The ComPost article is mostly one-sided in favor of this "no-zero" policy.


School Board member Megan McLaughlin (Braddock), who has two sons at Woodson High School, said the grading changes would potentially improve students’ chances when they apply to college.

For example, McLaughlin said, some schools allow students to retake tests to improve their grades, while other schools do not.

“What happens when you apply for college and kids from other schools have higher grades?” McLaughlin said.

McLaughlin founded the parent advocacy group Fairgrade and ran for a seat on the School Board after successfully lobbying Fairfax administrators to change the district’s strict grading for honors and college-level classes.

She said one proposal under consideration would allow students across the county to receive credit for submitting corrected answers to questions they got wrong on tests. McLaughlin said she also supports the proposal to replace zeros with a 50 percent for F grades.

I would say there should be a consistent grading system, that's not the issue, the problem is the ridiculous and absurd ideas McLaughlin, a liberal Democrat, pushes as a school board member like the correcting answers you get wrong on tests or giving a student a 50 instead of a zero.

But reality clashes with the liberal, feel-good gaga pushed by people like McLaughlin and Lockard, that is, removing something called "incentive." Gina Caneva wrote the following experiences she had at her school when they adopted the "no zero" grading policy in the Chicago area.

In fact, even though both batches of freshmen were similar academically, our on-track rate rose from 59 percent to 87 percent.  Since few students were truly failing, hardly anyone thought they needed to work hard to improve.

With 87 percent of our freshmen considered on-track, one would expect that those in the second group would have much higher standardized test scores. But in fact, the ACT scores of both groups were nearly the same, and equally abysmal—a 15.1 for those with a 59 percent on-track rate, and a 15.4 for the group with 87 percent on-track.

After one year, some teachers wanted to reverse the no-zero policy, but the administration would not allow it.  Why would they, when a major metric for rating a school, the freshman on-track rate, had increased nearly 30 percentage points and was far higher than the CPS average?

However, the statistic was not accurate in comparison to schools that did not have a no-zero policy. It was just that our expectations weren’t as high: If a student earned a D at our school for the same work that would have earned an F somewhere else, of course our on-track rates were higher.

Now, with the new school ratings system in CPS, many networks and schools are trying out no-zero policies, especially schools that are already on probation and have experienced little improvement.  My suggestion to these schools is to not lower your expectations for students by giving them the academic equivalent of a Monopoly-like “Get out of jail free” card.  With the no-zero policy, I saw us telling our students, “You can get a pass even when you don’t work hard for it.”

It is incredibly difficult for people in our country to claw their way out of generational poverty.  A good education is central to that struggle. And yet we are saying to young people in Chicago who have grown up in the deepest poverty, “You don’t have to work hard to pass. You can miss half of your assignments in all of your classes, and you can still graduate from our high school.”  Most suburban schools and selective enrollment schools would never even consider this rule.  And no, most colleges will not apply it either.  But we are allowing our students in CPS to believe they are on-track because of it.

Part of the problem with this isn't just the schools, it is also what goes on in the home, and the type of people who call themselves "parents" today. 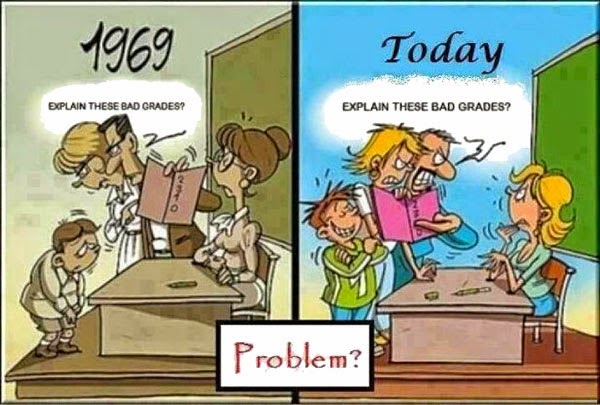 I've heard too many stories from teachers who have little Johnny or Susie in their class who is always in trouble, never seems to do their work or care, and when progress report or report card time comes along, the parents call, e-mail, or go to the school to complain to the teacher (or their administrator) about why their little angel is failing or always in trouble.  It's never the fault of the kid.  Maybe it's me, maybe I grew up in a different time and place, or maybe I had the "wrong" parents (because they cared about whether or not my sister or I were doing in school), but if I wasn't doing well in school, it wasn't the teacher who had to give an explanation, it was me who had to explain why my grades were sucking.  Maybe at the time I didn't like it, but I look back on it now, there was something called "incentive." I was motivated to do well in school, because it was expected of us. Looking at too many of today's kids, I'm glad for what I had in that upbringing.

Not only that, how are today's kids who get by with nothing but "participation awards" or "passing grade for the effort" going to be productive in the real world when it comes to getting their lazy butts out of bed, get to work on time, and be productive. Do you want a surgeon to perform your surgery who passed on the basis of "minimum or little effort" because self-esteem was threatened.

There's another factor besides the mushy, feel-good aspect. The big green $$$$$. Schools want the money from the state and federal governments, and won't get it if they're failing schools. So, pass as many kids along to the next grade to the government grants come rolling in.

This is why I've always been, and now even more so, a supporter of vouchers for private schools, because of these absurd practices proposed in Fairfax County, as well as the ridiculous "Common Core" scheme and the monopoly on government run schools by the liberal teacher's unions.  What's next after this? Students who earn grades of 90-100 have to have 15 points taken off and given to those with the lowest grade for "fairness and equity?"

If you live in Fairfax County and share my feelings, contact the school board.
Posted by MaroonedinMarin at 7:54 PM