To remember the great leader that Ronald Wilson Reagan was, on this day, his 104th birthday, posted below is video of his 1980 acceptance speech for the GOP nomination for President.

I can remember well, watching this as an 11 year old whose interest in politics and national affairs was sparked by seeing Reagan on the news. A few years earlier, I'd heard a kid in our neighborhood tell how the Soviet Union had a weapon they were going to unleash in 1980 that was going to wipe out the world. When I heard Ronald Reagan, I thought if anyone could stop the Soviet Union from contemplating Armageddon, it would be Reagan.

There was also the fact that 52 Americans were being held hostage in Iran, an fanatical Islamofascist government which then President Jimmy Carter helped establish by weakening the Shah, our ally, allowing the Ayatollah Khomeini to topple the Shah and being the era of modern Islamofascism that exists today.

Add to that high unemployment, high interest rates, and the gas lines (remember those in 1979?) because of a gas shortage.

Carter said it was all our fault.

Remind you of someone else?

So much of Reagan's 1980 convention speech is timeless. As true today as it was then.

Never before in our history have Americans been called upon to face three grave threats to our very existence, any one of which could destroy us.  We face a disintegrating economy, a weakened defense and an energy policy based on the sharing of scarcity.

The major issue of this campaign is the direct political, personal and moral responsibility of Democratic party leadership-in the White House and in Congress-for this unprecedented calamity which has befallen us.  They tell us they have done the most that humanly could be done.  They say that the United States has had its day in the sun; that our nation has passed its zenith.  They expect you to tell your children that the American people no longer have the will to cope with their problems; that the future will be one of sacrifice and few opportunities.

My fellow citizens I utterly reject that view.  The American people, the most generous on earth, who created the highest standard of living, are not going to accept the notion that we can only make a better world for others by moving backwards ourselves.  Those who believe we can have no business leading the nation.  I will not stand by and watch this great country destroy itself under mediocre leadership that drifts from one crisis to the next, eroding our national will and purpose.  We have come together here because the American people deserve better from those to whom they entrust our nation’s highest offices, and we stand united in our resolve to do something about it.

We need a rebirth of the American tradition of leadership at every level of government and in private life as well.  The United States of America is unique in world history because it has a genius for leaders – many leaders – on many levels.  But, back in 1976, Mr. Carter said, “Trust me.”  And a lot of people did.  Now, many of those people are out of work.  Many have seen their savings eaten away by inflation.  Many others on fixed incomes, especially the elderly, have watched helplessly as the cruel tax of inflation wasted away their purchasing power.  And, today a great many who trusted Mr. Carter wonder if we can survive the Carter policies of national defense.

“Trust me” government asks that we concentrate our hopes and dreams on one man; that we trust him to do what’s best for us.  My view of government places trust not in one person or one party, but in those values that transcend persons and parties.  The trust is where it belongs – in the people.  The responsibility to live up to that trust is where it belongs, in their elected leaders.  That kind of relationship, between the people and their elected leaders, is a special kind of compact; an agreement among themselves to build a community and abide by its laws.

When so many of us talk about someone being "the next Reagan" it is not in the "cult of personality" sense, as the liberals do with the Clintons or Obama, their failed, phony Messiah. Instead, it is in the principles seen in this speech--American exceptionalism, strong leadership, and trust not in government, a person, or party, but in the people who make this nation work.

That's what made Ronald Reagan a great leader and President, and the reason so many of us remember him fondly today, the day of his birth 104 years ago. 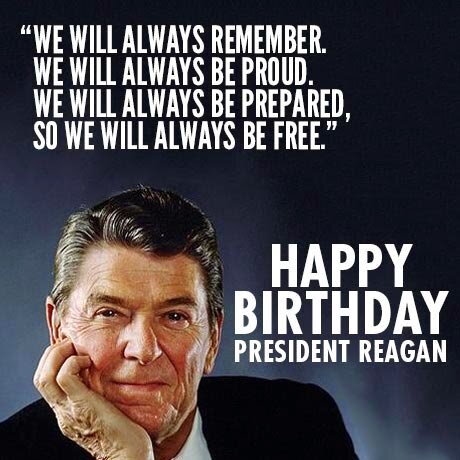 Posted by MaroonedinMarin at 7:09 PM