How many of you feel this way?

I have not felt less safe or secure living in the United States at any time since 9/11/01 as I do right now.

Case in point...this ridiculous two-day summit that was held by Dear Leader Obama to address "violent extremism," of which he and his Regime play the game of "See No Evil, Hear No Evil, Say No Evil," refusing to admit how Islam is at war with the West...

"The notion that the West is at war with Islam is an ugly lie," Obama said. "And all of us -- regardless of our faith -- have a responsibility to reject it."

...refusing to acknowledge the threat of Muslim terrorism...

...while acting as a apologist for Islam.


...according to President Obama, "Islam has been woven into the fabric of our country since its founding."

That's what the president told a White House conference on "countering violent extremism" on Wednesday.

Obama has said similar things in the past:

"I also know that Islam has always been a part of America’s story,” Obama said in a June 2009 speech in Cairo, Egypt. "Islam has always been part of America," he said in a 2010 statement marking the start of Ramadan. And in a 2014 statement marking Eid, Obama said the holiday "also reminds us of the many achievements and contributions of Muslim Americans to building the very fabric of our nation and strengthening the core of our democracy."

All while claiming Islamists (who he doesn't name) have "legitimate grievances."

As for this "summit" Pamela Geller notes how it opened with a Muslim prayer, and no other faiths were represented.

Not only that, here is Department of Homeland Security Secretary Jeh Johnson uttering this  (RCP).


We in the administration and the government should give voice to the plight of Muslims living in this country and the discrimination that they face. And so I personally have committed to speak out about the situation that very often people in the Muslim community in this country face. The fact that there are 1.6 billion Muslims in the world and the Islamic faith is one about peace and brotherhood.

Excuse me, Jeh Johnson, but you and your boss Obama took an Oath of Office to defend this nation, NOT to defend just one group of people. It seems that, instead of representing "the enitre country" (as Obama told David Letterman), Obama and his regime represent grievance mongers who have nothing a chip on their shoulders.

But all Hell breaks loose when Rudy Giuliani says Obama doesn't love America. "Thunderlips" Debbie Wasserman-Schultz got her panties in a knot about her President having is patriotism questioned.

Well excuse me, Thunderlips, but you, your President and your party need to have their patriotism questioned.

Which party is attacking our closest ally in the Middle East, Israel, by snubbing Prime Minister Bibi Netanyahu's speech?

Whose party walked out, or should I say, "goosestepped" out of the Virginia House of Delegates during a vote on a resolution supporting the State of Israel?


Yes, the Democrat Party of Debbie Wasserman-Schultz, Barack Hussein Obama and Terry McAwful. Today's Democrat Party is a Party of Treason who acts as an apologist for our enemies, attacks our allies, and then tells us "don't you question our patriotism" when they're called out on it.

Here's something else that is telling. Ed Henry of Fox News asked the Propaganda Minister Josh Not-so-Earnest about why Obama invoked religion after the murder of three Muslims (by a raging athiest) at UNC, but not the beheadings over the weekend of 21 Coptic Christians.

Neither did Obama condemn the beheading of an Oklahoma woman by a Muslim who had been trying to convert his co-workers, but he did send greetings to the beheader's mosque.

And I didn't hear any condemnation about the rising anti-Semitism from Jeh Johnson or anyone else in the Regime, which has been seen in Washington DC (like this Star of David with "Allahu Akbar" written in Arabic). 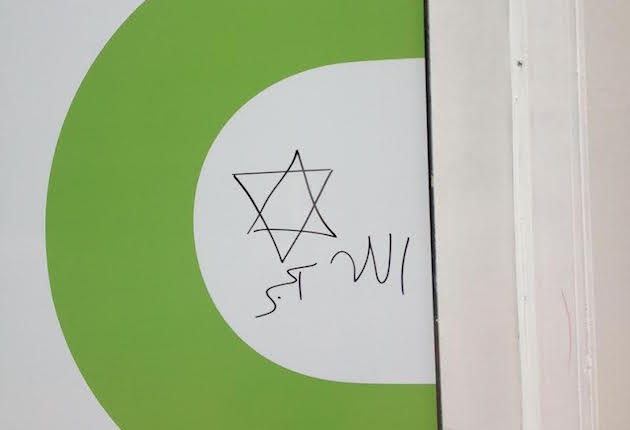 In liberal California at UC-Davis.

At a church in Melbourne, Florida, the following happened Monday night.

Fire sprinklers helped contain the flames to a storage unit connected to the 125,000-square-foot building.

The words "Allahu Akbar" were spray-painted on the storage unit. "Allahu Akbar" is an Arabic phrase typically translated as "God is great" and is a common expression used in various contexts.

Over the weekend, thirty (30) homes in Madison, Wisconsin were tagged with anti-Semitic slurs and swastikas.

So why is it in Barack Obama's America that one religion is off limits from criticism while others are attacked on a daily basis? Why is it that this Regime is more interested in attacking veterans, Tea Party groups, Fox News, or anyone who questions "climate change," but they act in denial about the threat that attacked America on 9/11/01 and 2012, as well as at Ft. Hood, Boston, Little Rock, and Oklahoma?

It appears those who mock us as "climate change deniers" are nothing but "Islamofascist Terrorism Deniers."
Posted by MaroonedinMarin at 5:49 PM