The old, anti-Semite peanut farmer from Georgia is off his meds again (Daily Caller).


In the wake of the Islamist terror attacks in France against cartoonists and Jews, former President Jimmy Carter’s first reaction was to pin the motivation for such terrorism on Israel’s treatment of the Palestinians. Appearing on “The Daily Show” Monday, Carter was asked by host Jon Stewart whether the violence the world saw on the streets of Paris was actually fueled by something else other than Islamic extremism.

“Well, one of the origins for it is the Palestinian problem,” Carter replied. “And this aggravates people who are affiliated in any way with the Arab people who live in the West Bank and Gaza, what they are doing now — what’s being done to them. So I think that’s part of it.”

Carter didn’t explain how solving the Israeli-Palestinian issue would in any way resolve the violent conflicts currently engulfing the Arab world, including the Syrian civil war, the Islamic State’s takeover of part of Iraq and its brutal implementation of Islamic law, and the conflict between the Egyptian government and the Muslim Brotherhood, just to name a few. Nor did he detail how the “Palestinian problem” helps explain why three French Muslims murdered innocent French Jews buying groceries for the coming Sabbath and cartoonists preparing the next issue of their paper. (READ: The Truth About Muslim Violence).

Judicial Watch has a refresher on Carter's background of siding with Islamists and other dictators.


Carter has long supported Palestinian extremism and justifies its violence as a reaction to Israeli apartheid. In fact, he’s the only U.S. president to participate in a highly publicized hug fest with Middle Eastern terrorist leaders. The shameful meeting took place during a visit to Syria where Carter met Hamas leader Khaled Meshal, who runs his violent operation from Damascus to avoid being arrested by the Israeli government. Hamas, a sophisticated and well-funded Palestinian extremist group, has for years appeared on the State Department’s list of foreign terrorist organizations and for a former president, or any western leader of Carter’s stature, to meet with its boss is inconceivable.

The former president also penned a disgraceful book (“Palestine: Peace Not Apartheid”)—justifying Palestinian violence—that outraged even his most loyal allies. In the book Carter calls Israel the “tiny vortex around which swirl the winds of hatred, intolerance and bloodshed.” He also writes that Israelis believe they have the right to confiscate and colonize Palestinian land and try to justify the subjugation and persecution of increasingly hopeless and aggravated Palestinians and some Palestinians react by honoring suicide bombers as martyrs to be rewarded in heaven and consider the killing of Israelis as victories.

As if all this weren’t bad enough, a few years ago Carter went to Cuba, long a sponsor of terrorism, where he joined communist Dictator Fidel Castro and his brother Raul in a schmooze fest. The men publicly bashed the United States and Carter became the only sitting or former America president to visit the Caribbean island renowned for human rights violations. Carter had also visited Cuba years earlier in an effort to lift America’s decades-long trade embargo against the oppressive communist dictatorship. The former president also worked to free five convicted Cuban government spies from federal prison. President Obama recently released them as part of a secret agreement with Castro. 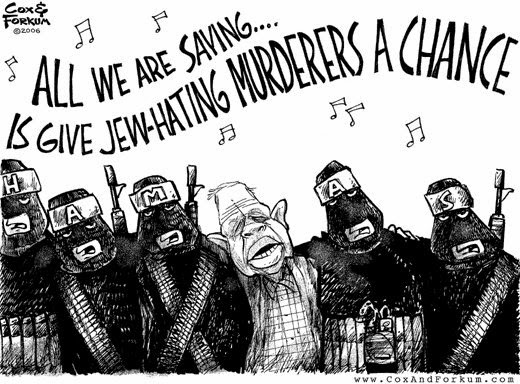 Hey Jimmy, why don't you go back to Plains, pound sand and lust in your heart instead of flapping your gums

Posted by MaroonedinMarin at 4:33 AM