Is Michael Moore Lying About His Uncle To Attack US Navy Seal Chris Kyle & Movie "An American Sniper"?

Over the weekend, Clint Eastwood's move "An American Sniper" a look at the life of the late US Navy Seal (and American hero) Chris Kyle, smashed box office records with a $90.2 million opening weekend.

It's obvious the American public still enjoys and is inspired by tales of heroism by those who have served our country. Nevertheless, that fact bothers those in the Left who constantly bash our nation and those who have defended it.

Seth Rogen, whose movie "The Interview" was given away for free online after a suspected hack by North Korea (which has been called into question), attacked American Sniper as "fake Nazi propaganda."

The biopic of Navy SEAL Chris Kyle directed by Clint Eastwood and staring Bradley Cooper is setting box office records, and the “Sicko” director is not too happy about that.

Taking to his Twitter account, Moore wrote, “My uncle killed by sniper in WW2. We were taught snipers were cowards. Will shoot u in the back. Snipers aren’t heroes. And invaders r worse.”

Kyle, the most lethal sniper in military history, saved countless lives of American soldiers in his four tours of duty in Iraq. He was killed in February 2013 by a fellow soldier he was trying to help who was suffering from severe post-traumatic stress.

Moore is a well-known Hollywood progressive who advocates for socialism and “economic justice.” Moore has a history of attacking the military, corporations and the wealthy while embracing totalitarian regimes around the world, including Cuba. While he’s never been in the military, he and his company have made tens of millions of dollars through his films.

His recent divorce exposed his lavish lifestyle, including a huge mansion in Traverse City, Mich., which exposed him to charges of hypocrisy.

This morning, Fatboy is lamely claiming he wasn't talking about Kyle. 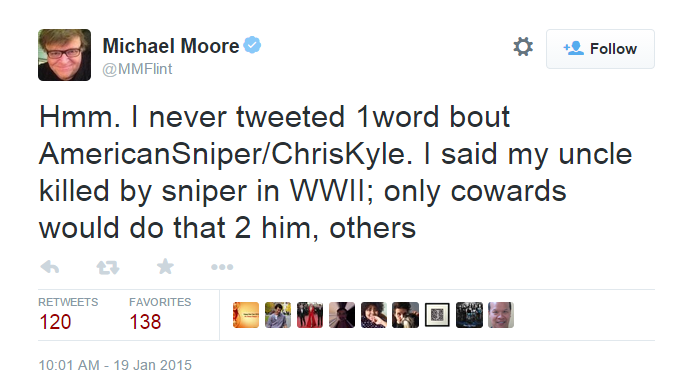 Moore has made a habit of lying in his "documentaries" in order to twist the truth to meet his Leftist logic.  The DC pointed out that for Moore's first big hit, "Roger and Me" he did interview GM CEO Roger Smith twice but did not use the footage, choosing instead to make it look like Smith was dodging Moore. Moore's Oscar winning anti-gun crockumentary "Bowling for Columbine" was filled with falsehoods, as was his 9/11 blood libel Fahrenheit 9/11.

John Stossel, on ABC's 20/20, even exposed fat boy's lies about how communist Cuba has the best health-care system.


Which brings me to this point, and I want to preface before I begin. It is not my intention to malign or disparage the military service of those who have honorably served our nation, as well as those who gave their lives for this country (including any relative of a fat piece of crap who disparages their service).  But given Moore's past track record of lying to make a point, I wouldn't doubt that he would lie about his uncle in order to attack our military.

Thanks to Dan Riehl on Twitter, who uncovered some items that call Moore's claim into question.


Another outstanding characteristic of the Japanese defense preparations was the great number of automatic weapons, a number all out of proportion to the troop strength. The basic infantry weapon, the rifle, played a very secondary role, being used mainly for the protection of the automatic weapons and for last-ditch personnel defense. The much publicized--but seldom encountered--Japanese sniper played no significant part. Indeed, after the battle XIV Corps reported:

Despite frequent mention by our troops of "snipers," the sniper as a carefully placed individual rifleman specializing in long-range selective firing seldom made an appearance (hardly any telescopic rifle sights were found in Manila).14

On the other hand, the Japanese used various types of grenades with great abandon, especially in defense of buildings.

Unless Moore's uncle served in a different airborne unit, there is no Lawrence Moore listed on the KIA of the 511th Parachute Infantry.

A Lawrence L. Moore, enlisted in January 1942 in Detroit, MI. A review of the World War II killed in action lists from Wayne County, MI (Detroit), as well as Genesee County (Flint) show no Lawrence Moore on their roster.

Now, maybe someone who has better access to military records may be able to verify Moore's claims, and if they do, I will update this post. But based on his track record of supporting the terrorists in Iraq (they are the Minutemen), and his hate of the US Military ("Stop saying I support the troops. I don’t. I used to.") I'm calling BS on his claims.

So the ball is now in your court, Tubby! Put up or shut up!

Posted by MaroonedinMarin at 9:07 AM