PROOF OBAMA LIES! Calls Gruber "Adviser Who Was Never On Our Staff," But 2012 Campaign Featured Gruber In Video


“The fact that an adviser who was never on our staff expressed an opinion that I completely disagree with in terms of the voters is not a reflection on the actual process that was run,” Obama declared at a press conference here, speaking for the first time about the comments by MIT economist Jonathan Gruber.

When the president was asked whether he had intentionally misled the public in order to get the law passed, he replied: “No. I did not.”

Here's the video (along with news of another ISIS beheading) showing Fox News' Ed Henry asking Obama. As usual, Obama is doing his usual plausible deniability (aka The Limbaugh Theorem) on the issue (just like the IRS and ISIS)..."I didn't know bout that til I was told about it before coming on stage here."


Obama is lying and it is easily provable.

Exhibit A - Obama's 2012 Campaign used a video on the anniversary of RomneyCare in which Gruber was "featured prominently", according to CNN on April 12, 2012. 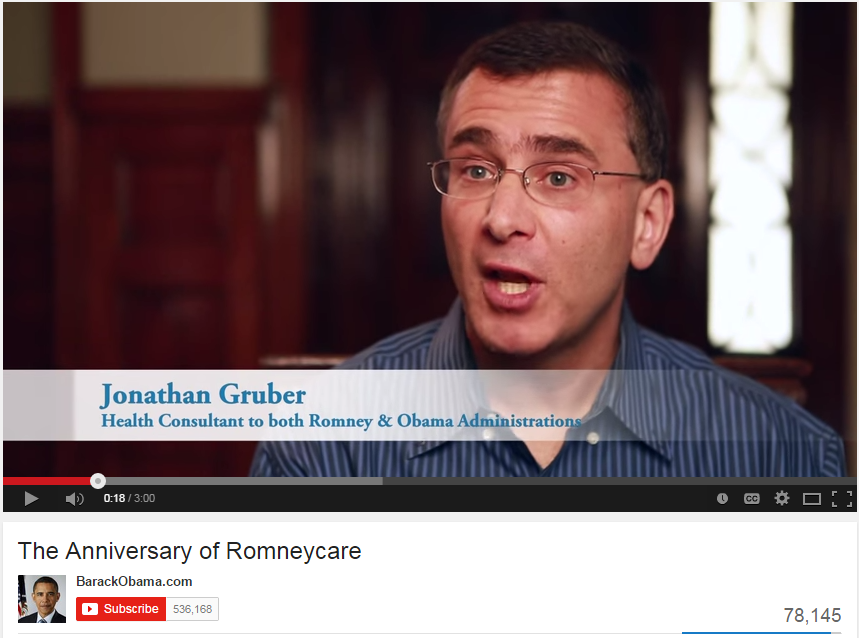 Now the Obama campaign is out with a web video that drives home the message.

"I helped Gov. Romney develop his health care reform or Romneycare, before going down to Washington to help President Obama develop his national version of that law," says Jonathan Gruber a bright eyed MIT Health Consultant featured prominently in the video. The spot includes old footage of Romney thanking Gruber for his work on the Massachusetts health bill.

Gruber's verdict: "The core of the Affordable Care Act or Obamacare and what we did in Massachusetts are identical." 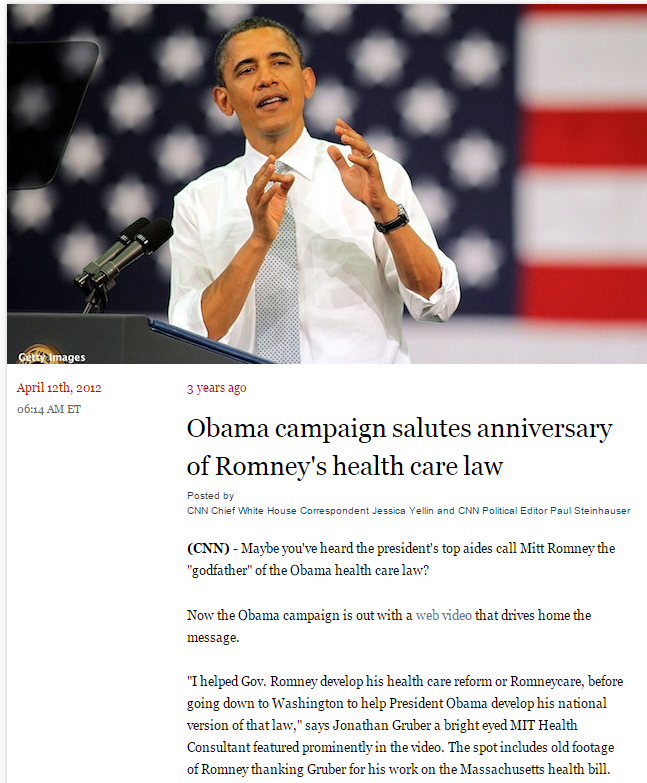 Exhibit B - Obama's Department of Health and; Human Services paid Gruber, and, according to White House visitor logs, he visited the Executive Mansion 19 times. Nancy Pelosi (who now claims not to know Gruber) and the White House website cited Gruber (Fox News).


But while Jonathan Gruber might not have been a familiar name until this week for many, Pelosi and the rest of the lawmakers who pushed the law certainly knew who he was in 2009 and 2010.

A look at the record shows he was in fact paid to advise the Department of Health and Human Services. And he continues to play a role in health policy elsewhere, even as his unearthed videos cause headaches for the administration, just ahead of this weekend’s Round 2 enrollment launch.

Gruber, an MIT professor and economist, has lived amid the health care debate in Washington for at least 20 years.

Gruber was retained by the Department of Health and Human Services in 2009 on a $297,600 contract to provide “technical assistance in evaluating options for national healthcare reform.” Gruber also confirmed to The Washington Post that he was paid another $95,000 before that, for a total of nearly $400,000.

Around this time, his analysis was not only featured on Pelosi’s House speaker website in 2009, but cited by the White House several times. Though he often was billed as an analyst in media interviews where he touted the merits of the plan, critics complained his financial ties to the administration weren’t disclosed.

Gruber also spent a good deal of time testifying on the Hill and in meetings at the White House – 19 visits from 2009 to June of this year, according to publicly available logs.

Exhbit C - As for the claim he did not mislead America on health care, we've long known, and the Obamacare rollout last year proved it, how everything Obama said about his health care plan was bull-s**t!

Here's video compilation by Sean Hannity of Obama's lies, that you could keep your doctor, your health-care plan, and insurance would be more affordable.  Period!


But it isn't true. Insurance costs increased, coverage went down, and millions of Americans lost their coverage that Obama promised they could keep.

Like Rich Weinstein, an investment adviser in Philadelphia who received notification in 2013 his insurance plan was being cancelled. After doing research on the Internet, Weinstein uncovered the Gruber videos, doing the job our corrupt lapdog media refuses to do.
Posted by MaroonedinMarin at 8:21 AM