It's bad enough that E.W. Jackson, a black conservative who is running for Lt. Governor in Virginia has had his signs vandalized in a racist manner.

But it's even worse that his Democrat opponent, Ralph Northam, refused to shake his hand after a recent TV debate (Breitbart). 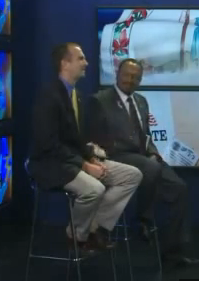 National civil rights leaders reacted to Democratic candidate for Virginia Lieutenant Governor Ralph Northam refusing on camera to shake hands with his Republican opponent—right after confirming that he wants to massively expand government healthcare and not denying allegations that he thinks traditional Christians have no right to act according to their traditional-marriage views. (at 6:30 in the video)


Dr. Alveda King—the niece of Martin Luther King, Jr. and one of America’s most prominent and respected civil rights leaders—said in a statement to Breitbart News:

I was saddened to learn today that Lt. Gov. candidate Ralph Northam refused to shake the hands of his opponent E.W. Jackson at the end of a television debate.  I am deeply burdened by the loss of civility in politics today.

As one who has been elected to office as a Democratic Georgia State Representative, served as a Republican presidential appointee and who has often voted as an Independent, I have often said that we would all be better off without the political squabbles that tend to divide us. Refusing to shake hands with your opponent in front of a television audience takes the loss of civility to a new low. I would hope that his refusal to shake hands had nothing to do with the color of his opponent’s skin.

In a troubled economy, people are looking for leaders who can bring everyone together to solve the problems that confront us all. It is my hope that in these last hours of the race, Ralph Northam will recognize his inappropriate behavior and offer an apology to E.W. Jackson and to all those he hopes to represent.

Dr. King’s reference to skin color is because Northam is white, while Jackson is African-American.

Ken Blackwell from the American Civil Rights Union—who has been elected to public office more than a dozen times and also received presidential appointments and Senate confirmations to several federal offices—also offered his reaction exclusively to Breitbart News, saying:

The Founders of the American republic understood that democracy only works when both sides can at least be civil to their opponents. Virginia voters need to decide if that disqualifies Ralph Northam from being lieutenant governor of the Old Dominion.

People sometimes accuse politicians of being two-faced or insincere when they refer to bitter opponents as “my good friend” and pose for smiling photos with them. It’s not deception; it’s basic courtesy and respect, without which democracy cannot function.

In many countries, disagreements over policy end in brutal government oppression or even bloodshed. Politics can be so passionate with people clashing over views that an essential element of building goodwill and finding common ground is by working overtime to be courteous and complimentary. Unfortunately, Mr. Northam’s actions fall short of that important standard.

Virginia’s top Democratic candidates Terry McAuliffe (running for governor) and Northam have portrayed themselves as pragmatic centrists who are happy to reach across the aisle. But this video shows Northam won’t even reach across his chair.


Jackson spoke with Larry O'Connor on WMAL's Mornings on the Mall this morning.

Yet Democrats are the ones who claim to champion blacks in minorities, all while attacking the Tea Party as racists.
Posted by MaroonedinMarin at 2:32 PM