Hillary Rotten Clinton is coming to Northern Virginia this weekend to campaign for old buddy "Terrible" Terry McAwful for Virginia Governor (The Hill). 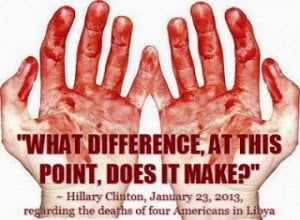 It will be Clinton's her first public campaign event since she left the Obama administration in February.

Clinton will officially endorse McAuliffe at a "Women for Terry" event in Northern Virginia on Saturday afternoon, McAuliffe's campaign announced. This will be the former secretary of State's third event for McAuliffe, after hosting two fundraisers, and her first public campaign stop in years.

The Clintons have long been close with McAuliffe. He headed the Democratic National Committee while President Clinton was in office and was a top fundraiser for Hillary Clinton's 2008 presidential campaign.

Clinton, a potential 2016 presidential candidate, has kept a relatively low profile since stepping down as secretary of State, though in recent weeks she's been more active, with high-profile appearances at the Clinton Global Initiative and the American Bar Association's annual conference.

On the eve of the Obama/Reid government shutdown, as federal workers were waiting to see if they would be furloughed, the Hildebeast threw a lavish fundraiser for McAwful at her DC mansion.  Her alleged spouse, impeached former President and sexual predator/alleged rapist Bill Clinton, sent a campaign e-mail for the former leader of his Hillbilly Mafia this past Monday.

McAwful has also been tied to Hillary's brother, Tony, in a scandal with getting EB-5 visas for his failed Greentech electric car program, which failed to created jobs, or even a product.  Hillary, like McAwful, took campaign donations from a sleazeball named Joseph Caramadre, who took part in a scheme that took IDs of terminally ill people.  McAwful was one of the investors in the scheme.

Do we need this kind of Clinton corruption we saw in the 1990s in the Commonwealth of Virgina?

Posted by MaroonedinMarin at 4:37 AM

Many people look to come to the U.S. on a green card but some are unaware that there is more than one type eb5 visa