The Democrat Party is showing how they will stoop to the lowest lies in order to distract from "Terrible" Terry McAwful's corruption about birth control and sex to attack Ken Cuccinelli.

Spencer Chretien at CounterCultured (hat tip Robert Stacy McCain) writes the following about nine sayings he saw on the campus of William and Mary:


If you hadn’t already heard, the ninth of these created some controversy in the Virginia gubernatorial race last week. Virginia Democrats, responsible for the content and distribution of the flyers, decided to remove them after they sparked a minor hullabaloo.  We can assume, then, that at least here in Williamsburg, “Students for Pleasure,” whatever that is, has picked up the slack and done the Democrats’ dirty work. (Considering his business background, I would not be surprised if Terry McAuliffe himself had devised some shady scheme to transfer funds from the Democratic Party of Virginia to “Students for Pleasure,” but that’s beside the point.)  Speaking for myself, I’m glad there was offense over the poster; at least a trace of decency remains in our political campaigns and our society.  Oh, and in case you’re wondering, Ken Cuccinelli has never supported banning oral sex—he only was defending the law that protects kids from sexual predators. But since when has truth mattered to liberals?

This is the sign that Chretien is referring to that the ComPost wrote about: 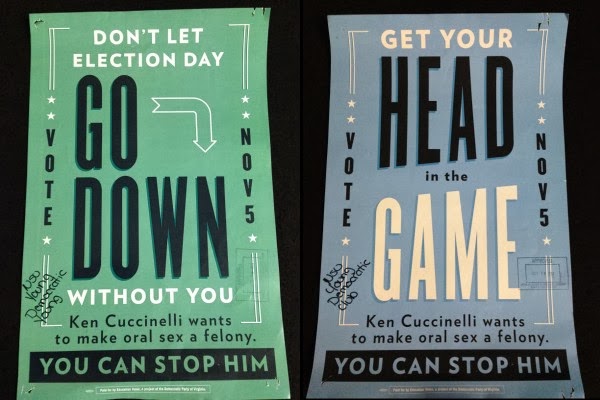 As was first reported by the Hampton Roads TV station WAVY, two posters spotted last weekend at Norfolk State University say “Ken Cuccinelli wants to make oral sex a felony” and urge students to vote Nov. 5. One poster says, “Get your head in the game,” while another says, “Don’t let Election Day go down without you.”

Both posters say at the bottom that they were paid for by “Education Votes, a project of the Democratic Party of Virginia.” They were distributed to other campuses around the state, too, but DPV spokesman Brian Coy said the party has had a change of heart.

“While we feel Virginians deserve to know the truth about Ken Cuccinelli’s extreme social agenda, we apologize to those who were offended,” Coy said. “We’re working to remove these posters from the campuses in question and they will not be used again.”

Garren Shipley, a spokesman for the Republican Party of Virginia, called the posters “par for the course” for Virginia Democrats.

“Not only does it repeat this thoroughly-debunked Terry McAuliffe falsehood,” Shipley said, “but it manages to do it in an even more crass and tasteless way than before. ... Mailers and posters like this are what you get when your candidates have no record to run on. The Democratic Party of Virginia should be ashamed. But they’re probably not.”

Another McAwful falsehood...Cuccinelli wants to take away birth control.

It's another liberal lie that Cuccinelli sets straight.


Terry McAuliffe is lying about, among other things, contraception.

In T.V. ads, mail and during debates and forums, McAuliffe is telling two lies:

1) He is saying that personhood legislation that I have supported in the past would have outlawed contraception, which is false; and

2) He is also saying - without citing much of anything - that I want to ban contraception in the future.

Look, this is not one of those topics that anyone particularly enjoys discussing, so let me be short and blunt.

No legislation I have ever supported would have - or even could have - “outlawed contraception” as McAuliffe asserts.

And I do not support legislation banning contraception.  Could I be any clearer?

You’ll note that I said above that we couldn’t have “outlawed contraception,” even if someone had wanted to.  The reason for this is simple.

The U.S. Supreme Court held in two cases, Griswold and Eisenstadt, that the government can’t ban contraception.  Those cases are decades old.  This is a long-settled area of law.

And Terry McAuliffe is a Washington, D.C. lawyer, so he is well aware that what he is saying is false.

You got that right.  He is knowingly lying to try and scare women to vote against me.

This is only one of the lies he is quite intentionally telling.  I’ve never seen anything like it in a campaign before, and I need your help to fight back.

I need you to forward this email to all the women you know in Virginia, and point out to them that McAuliffe is telling a blatant lie and they need to know about it for two reasons: first, if the issue is of concern to them, knowing the truth will put their mind at rest; and second, they need to know that McAuliffe isn’t making a simple mistake.  Rather, he’s intentionally lying to the women of Virginia.

When you forward this email, please ask each woman you forward it to to send it on to the other women they know in Virginia too.

Remember, there’s two reasons this email is important: first, Terry is lying about me and contraception; and second, this is not a mistake on his part, it is absolutely part of his strategy.  He is lying about numerous other issues as well, and I know you will be shocked, but the media isn’t doing much about it.

At www.Cuccinelli.com, on the front page, is a big button called the truth about Ken.  It addresses this and other issues that Terry McAuliffe is not being truthful about. Please use this resource as you work to win last minute voters for us!  Thank you!

Keep in mind this is the kind of garbage that Richard Milhous Obama ran on to deflect from his failed record as President.  Since it's this close to Halloween, the Democrats favorite holiday next to Tax Day, Terry McAwful wants to put his ugly mask on and scare women and sex starved college students into voting for him.

Why? Because Terrible Terry has a lot to hide about his past.  He doesn't want you to know about Global Crossings, or his failed electric car company that created no jobs in Virginia, his visa scam with Hillary Rotten's brother, or how he invested in a scheme to prey on the terminally ill.

No, McAwful and the Democrats pander to the lowest common denominator, just like reality TV.

For liberals who claim to care about women's rights, McAwful and the Democrats emphasis on birth control and abortion make it appear that they only look at women as nothing but sex objects.
Posted by MaroonedinMarin at 7:05 PM