This story that appeared on AP caught my eye, as it is from my old stomping grounds of the Harlingen/Rio Hondo area of South Texas (Brownsville Herald).

ARROYO CITY — Adolph Thomae Jr. County Park is managed, maintained and staffed by Cameron County, but the federal government has closed it.

County Commissioner David Garza said no federal money is spent on the park, but since it is leased from the U.S. Fish and Wildlife Service, which owns the surrounding Laguna Atascosa National Wildlife Refuge, the park is now off limits to anglers, boaters, birders, hikers and anyone else who wants to use it during the federal government shutdown. The park wasn’t closed during the 1995 federal government shutdown, Garza said.

But this time it’s different.

Cameron County is in the process of negotiating a new lease with USFWS, and officials are asking for public support for it. The original 25-year lease was signed in November 1986 and it expired in November 2011.

But Garza apparently has a yellow streak when it comes to his constituents being inconvenienced by the Obama/Reid National Temper Tantrum.


“We don’t want to get into a fight with the federal government at this time,” he said.

But Garza said that the county had no choice about closing the park, and the closing “has nothing to do with the lease.” “We pushed to keep our portion open and to reopen our portion,” he said.

While the lease negotiations are pending, he said, the county has a conditional one-year lease that allows the county to operate the park and a right-of-use permit.

“The lease has nothing to do with anything. They told us (the park would be closed). We didn’t put up the signs; they had law enforcement there,” he said.

Garza added that county officials contacted U.S. Rep. Filemon Vela, D-Brownsville, and U.S. Sen. John Cornyn, R-Texas, in an effort to keep the county park open during the federal shutdown. Furthermore, there are other parks in the state that are in the same position of managing land owned by the federal Department of the Interior.
“We’ve made all the calls we can make,” he said.

...When asked about closing the county park, Boyd Blihovde, Fish and Wildlife’s refuge manager at Laguna Atascosa, said, “Well, this really is a sort of a topic or decision that’s way above my head. The parks are managed in partnership with the county but to say there’s no federal involvement is unfair.”

But he could not explain why the county park is closed when no federal resources are used to operate it, saying, “We’re following national policy.”

Maybe someone who is reading this in the area could take the suggestion of this poster at FR and post the following sign at the Thomae County Park to illustrate the thuggery coming out of the Spite House. 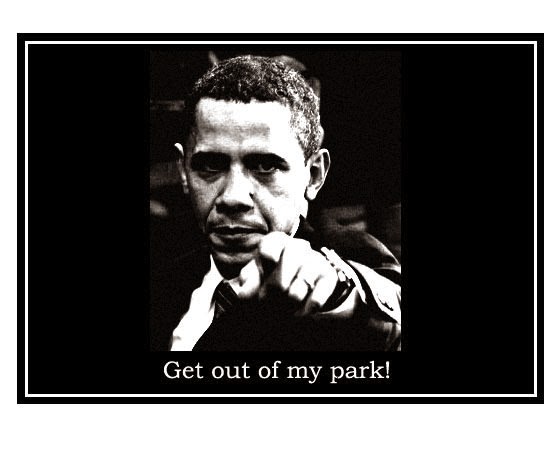 Posted by MaroonedinMarin at 3:03 PM