In an August 29 letter to AFL-CIO President Richard Trumka, ILWU President Robert McEllrath cited quite a list of grievances as reasons for the disillusion of their affiliation, but prominent among them was the AFL-CIO’s support of Obamare.

“We feel the Federation has done a great disservice to the labor movement and all working people by going along to get along,” McEllrath wrote in the letter to Trumka.

The ILWU President made it clear they are for a single-payer, nationalized healthcare policy and are upset with the AFL-CIO for going along with Obama on the confiscatory tax on their “Cadillac” healthcare plan.

The Longshoreman leader said, “President Obama ran on a platform that he would not tax medical plans and at the 2009 AFL-CIO Convention, you stated that labor would not stand for a tax on our benefits.” But, regardless of that promise, the President has pushed for just such a tax and Trumka and the AFL-CIO bowed to political pressure lining up behind Obama’s tax on those.

McEllrath also went on to say that they support stronger immigration reform than the AFL-CIO is supporting.

Well Mr. McEllrath, you should have thought of all this before you, along with other longshoremen's unions, endorsed Obama for re-election in 2012. 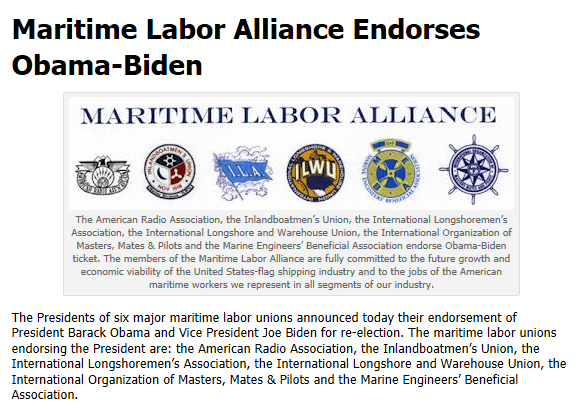 You got exactly what and who you voted for.

Posted by MaroonedinMarin at 4:25 AM