It's Time For The Tar And Feathers

Never mind that, unlike the lead up to the War in Iraq, the American public overwhelmingly opposes this (even Nancy Pelosi's five year old grandson has more brains than she does), but overnight doves turned Chickenhawks like Barbara Check Bouncer, Pelosi, John Frog Kerry, Dick Turbin and others are ready to lauch a knee-jerk war with no thought of the consequences of their actions.

An example of the disconnect and arrogance between the rest of America and DC is John McCain. Seriously, I'm embarrassed this guy was the GOP nominee in 2008. With the exception of two things, there's no difference between him and his dingy daughter Meghan.

First of all, McCain went on TV the other day and was so mindless he compared jihadis who say "Allahu Akbar" to Christians who say "thank God."  That is, until Debra Burlingame, the sister of the American Airlines flight 77 pilot who was killed on 9/11, took him to task. 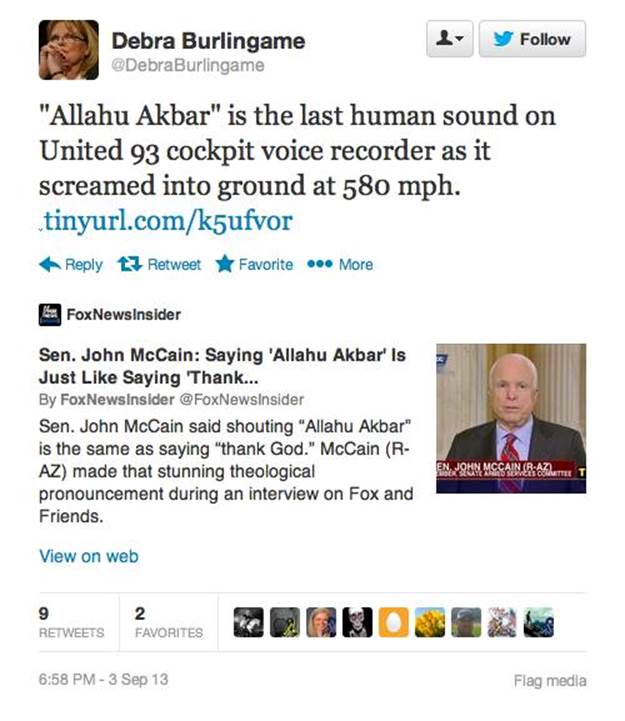 McLame was also taken to task by Debbie Lee, a Gold Star Mom whose son was the first US Navy Seal killed in Iraq.  Reason?  When the Senate was hearing testimony on action against Syria, McLame was too busy playing poker on his iPhone to care.

Responding to Sen. John McCain (R-AZ) playing online poker on his iPhone during yesterday’s Senate hearing with Secretary of State John Kerry over war with Syria, Gold Star mother Debbie Lee fired back in an exclusive comment to Breitbart News. “It infuriates me,” she said. “We are facing the possibility of sending our sons and daughters to a war, conflict, military action or whatever politically correct term you use – an action that could change the world as we know it – and McCain couldn’t care less.”

Lee continued, “McCain is so bored that he needs to play poker on his iPhone and then when caught jokes about it. How disgraceful!

...Lee concluded, “I’m sorry the lives of our brave warriors who are fighting for our freedoms bore you. I’m sorry my country, the country my son died for, bores you. I’m sorry that the risk of war bores you. Senator, it is time for you to resign your position as my Senator.”

I even had one Facebook friend call McLame's office and complain. Typical of so many staffers for these arrogant public servants, they snickered at her complaint.

Is this what passes for leadership?  People who are so disconnected from the rest of the nation they are willing to risk the lives of our bravest just to preserve a failed President's image?  How can we trust these people with making decisions for our nation when they cannot fight wars that should be fought, and will side with the same Islamist enemies who attacked us 11 years apart on 9/11?

If you ask me, McCain and a lot of other people in DC deserve a tar and feathering like the one received by pro wrestling manager Jimmy Hart.

Posted by MaroonedinMarin at 6:55 PM