Did Putin Just Embarass Obama, But Obama Tries To Get Credit?

Looks like Vlad Putin put our thin-skinned boy President in his place by coming up with a proposal to solve the Syria crisis without the Obama/Kerry rush to war (UK Guardian). 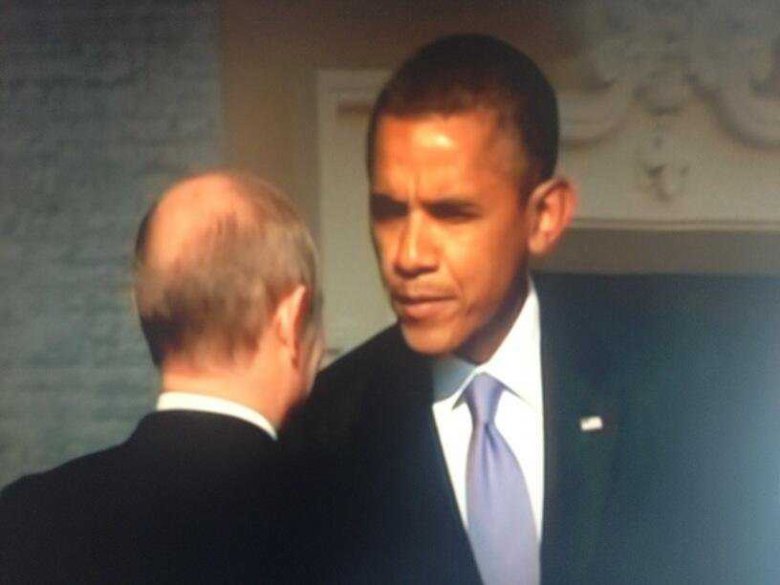 "How dare you make me look small!" the stare of a thin-skinned sociopath﻿

The White House gave a cautious welcome on Monday to a Russian proposal for Syria to place its chemical weapons under international control, opening up the first real chance of a political settlement to the crisis since hundreds of civilians died in an attack on a Damascus suburb last month.

Russia's suggestion, made as a result of an apparent stumble by the US secretary of state, John Kerry, set off a diplomatic scramble in Washington as administration officials sought to assess whether it offered a way out for Barack Obama from what has become an increasingly intractable problem.

US deputy national security adviser Tony Blinken said "it would be terrific" if Syria followed through the proposal advance by the Russian foreign minister, Sergey Lavrov, to put its chemical stockpiles under the control of international observers.

But Obama is now trying to claim credit for something he didn't do.


President Obama said Monday, a day before his prime-time address to the nation justifying military action in Syria, that he would prefer a diplomatic solution over a military strike and that he doesn´t think he will be able to convince a majority of Americans that it´s the right thing -- but that he can make "a strong case." (Snip) Mr. Obama also told Ifill that, "I did have those conversations" with Russian President Vladimir Putin, when asked whether he had discussions with the Russian leader about the idea of putting Syrian chemical weapons under international control.

OK, first, he denies saying what he said back in August of last year about setting a red line and tries to sluff that off on Congress and other people. But when it comes to the US Navy SEALs killing bin Laden, or the Russians solving a foreign policy dispute, Obama wants to claim all the credit for.

Unfortunately, this Syria mess is being used also as the start of the Hillary 2016 Campaign as well.
Posted by MaroonedinMarin at 6:29 PM