I saw on Twitter yesterday the news of a "massive" protest against Obama's rush to war in Syria.


Demonstrators gathered in Hollywood Sunday to protest a possible military strike on Syria.

The demonstration at the intersection of Hollywood Boulevard and Highland Avenue came a day before Congress was expected to reconvene to discuss the issue.

The debate over the possible U.S.-led attack against Syria has raged amid allegations that Syrian President Bashar Assad was behind a chemical weapons attack that claimed the lives of more than 1,400 people.

Of course, the protests are no where near what they were back in 2003, when there was the run-up to the Iraq War.  Many of the celebrity mouthpieces are conspicuously silent.  Noted anti-American Hollywood lib Ed Asinine said:

Another reason some Hollywood progressives have been reticent to speak out against war in Syria, according to Asner, is fear of being called racist.

“A lot of people don’t want to feel anti-black by being opposed to Obama,” he said.

As much as Obama is loved by Hollywood power-brokers, Asner says he doesn’t fear backlash by speaking against the president.

“Hollywood can’t mobilize for that either,” he joked. “If they try to punish me, what are they gonna do? Take away my pension?”

Donald Douglas at American Power and I discussed on Twitter that these protests were most likely from the Commies at ANSWER, and yes, the rhetoric sounds about the same from the LA one, especially judging from this video that the news didn't show. 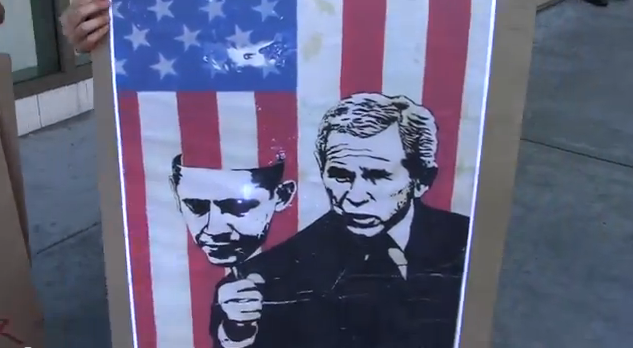 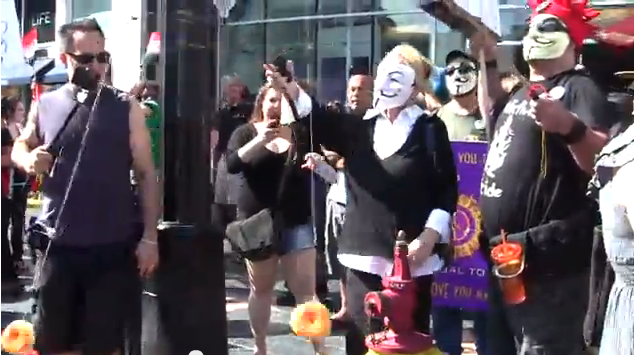 Classy....libs in their Occupy masks hold donuts on a fishing line in front of police.

Up in the Bay Area, the fellow travelers of the LA Commies (aka Code Pinko) protested at Dianne Feinstein's home (NBC Bay Area, via Free Republic).


Demonstrators gathered at the property of Sen. Dianne Feinstein this weekend to protest possible U.S. military action in Syria.  Protesters with the group Code Pink set up camp outside Feinstein's San Francisco home with tents, sleeping bags and banners.


Demonstrations also included a light show, a candlelight vigil and a march to the Golden Gate Bridge.

"We who came here today to camp out are saying to the people of the Muslim world we care about your lives," Code Pink activist Toby Blome said. "Your lives are as important as ours. Children shouldn't be killed. There's no excuse to put children at risk."

Protesters also distributed fliers to the Pacific Heights neighborhood, urging Congress toward diplomacy rather than any military action. 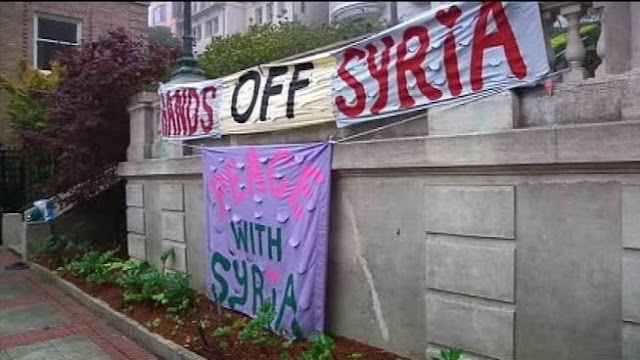 A light show? Were they passing out the brown acid as well?

To those conservatives and other sane people who oppose Obama's War for Ego, a word of warning.  Do not join these protests held by Communist groups who engage in this kind of rhetoric or who think it's a good idea to protest on people's front yards.  You're becoming tools for the Leftists whom we have no agreement on anything.
Posted by MaroonedinMarin at 5:01 AM