Sarah Palin: If You Fund It (Obamacare) You Own It!

Sarah Palin made her voice heard on the monstrosity known as Obamacare, and the RINO Republican establishment who refuses to fight it (Facebook).

Forced enrollment in Obama's "Unaffordable Care Act" is weeks away. This beast must be stopped -- by not funding it. Today, Todd and I joined with many of our fellow citizens to urge those in the U.S. Senate to not fund Obamacare.

We The People must continue to make our voices heard and hold those elected to serve this great nation accountable. Those in the Senate and those seeking to serve there must stand strong against this devastating program before it reveals its true face now recognized by both sides of the aisle as the bureaucratic and economic beast that will deny our families, our businesses, and our sick the ability to access health care.

The time for rhetoric and ceremonial votes in Congress is over. The time to take serious action to stop Obamacare is now. Join us in urging Senators -- Don't Fund Obamacare! Just remember -- if you fund it, you own it!...

P.S.: Click here to join us in signing this petition: http://www.dontfundobamacare.com/ 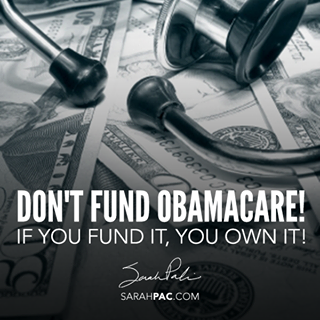 Thank you Sarah for showing something the GOP country club establishment refuses to show--leadership!

Senator Ted Cruz, from my home state, was on Sean Hannity's show last night about the effort he and others are leading to defund Obamacare, while also speaking on other issues like Syria.

Posted by MaroonedinMarin at 9:43 AM