Well, what do you know! It looks like some of the Left has some intellectual honesty and is protesting Obama's possible war on Syria (Mandy Nagy, Legal Insurrection).

Protesters have gathered outside the White House to oppose intervention in Syria as Obama takes the podium. 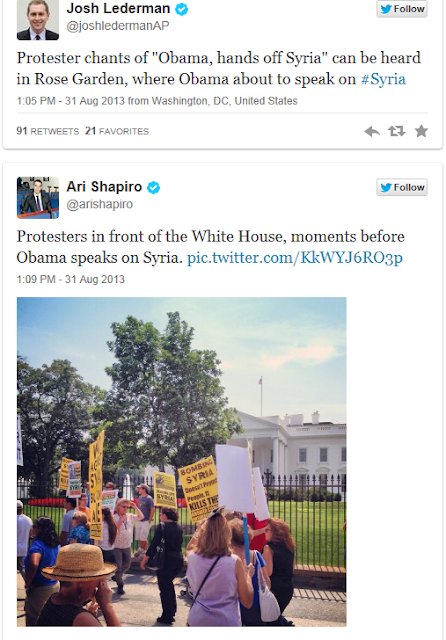 The protest was led by the Communist front group International ANSWER, who led all the anti-Bush rallies that Democrats jumped on the bandwagon of back in the 2000s.

A few protesters calling themselves Republicans / conservatives were there as well.

While I oppose a war on Syria (my reasons I laid out earlier, most notably, we would only be helping forces aligned with al-Queda with such intervention), I would urge fellow conservatives to stay far away and keep protests separate from the ANSWER freaks.

Of course, it's only a handful compared to when Democrats were willing to march arm in arm with their Commie Comrades.

To you heartbroken Lefties who are protesting and thought Obama would bring "change," I quote Sarah Palin...

Posted by MaroonedinMarin at 3:05 PM