To GOP Leadership: You Can't Win When You Stand For Nothing & Alienate Your Base In The Process

Former vice presidential candidate Sarah Palin told Greta Van Susteren Friday that “elites” in the Republican Party banned her from mentioning Barack Obama’s decades-long association with the radical Rev. Jeremiah Wright during the 2008 campaign for fear of a media backlash. Also off the table was any talk about Weather Underground bomber Bill Ayers, in whose living room Obama launched his political career.


Meanwhile, the 2008 Presidential nominee, John McLame, had the strategy of telling voters that they had nothing to fear from an Obama Presidency.  Great strategy, moron!  You might as well have had a sign that said "I really don't want to win this race."

But it wasn't just limited to 2008. We saw the same campaign advisors who gave Palin this idiotic advice attack her in the press over the last four years (hello, Steve Schmuck), as well as the GOP paid consultants (ie: Karl Rove), whose advice during the Bush 43 Presidency was "don't respond to liberal political attacks." Of course, the McLame campaign used this failed tactic as well.

Rove's strategy for fending off liberal attacks is best illustrated below by George McFly in Back to the Future.

So, these same paid consultants whose failed strategery caused the disillusionment of Bush 43, and two losing Presidential campaigns (2008 and 2012), are back again, saying a move by conservatives to defund Obamacare should not be attempted. Their reason? Obama and the media will use it as a club against us. Once again, Karl Rove is pushing this idiocy, with Senators Tom Coburn and Richard Burr parroting almost the exact same line. 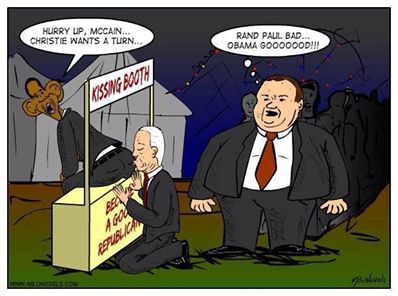 It goes beyond surrendering to Obama on the failed Obamacare risky scheme. PJ Media reports how some GOP operatives are, according to sources, aiding the attacks on voter ID laws by racist Attorney General Eric Holder on states like Texas.

This insanity is paying dividends. Fundraising for the GOP was down 27 percent from 2009 in the first quarter.  There's good reason. A party or candidate who stands for nothing will fall for anything.  That's what we've seen the GOP do over the last seven months, do their best to give Obama what he wants, because we don't want to look like meanies.

If that's the strategy of Boehner, Rove, McLame, et al, they will lose, and deserve to lose.  We need to get more people in the GOP leadership who have as much passion as liberals show, instead of those play-it-safe RINOs and Bushies who only want to attack conservatives while playing footsie with libs.

Posted by MaroonedinMarin at 7:50 AM

The ironic part is that the spineless GOP members, even the self-espoused "Conservatives", are afraid to break away from the GOP because that will "hand victory to the Democrats". So the choice is to lose when RINOs are the candidates or to lose by leaving the GOP and forming another political party? I choose to stand for something, win or lose, instead of stand for nothing and guarantee a loss every time. If the change doesn't happen soon, VERY soon, it will be too late.