Apparently, the green paint splashed on the area of the monument was discovered early this morning (photo & text from The Blaze). 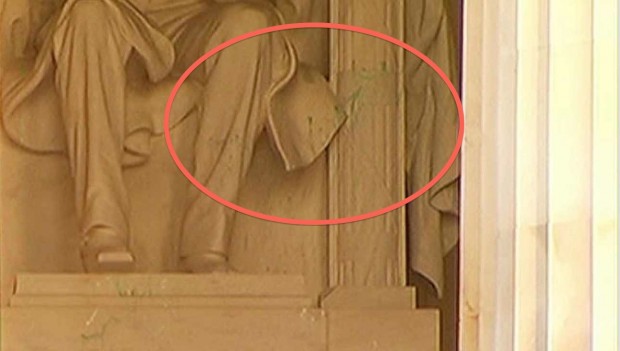 Police say the apparent vandalism was discovered around 1:30 a.m. Friday on the statue, the pedestal and the floor. No words, letters or symbols were visible in the paint.

Capt. Steven Booker says the paint spill “appears intentional based off of the splatter.” He says police are reviewing security camera footage to try to identify possible suspects.

Police say the memorial will be closed until the National Park Service maintenance crew can clean up the paint, which is expected to happen later Friday.

The memorial, one of the most popular sites on the National Mall, was dedicated in 1922 to the nation’s 16th president.


The NBC affiliate in Washington DC quoted joggers on the vandalism:


"I have no idea who would want to do something like that," said Scott Arndt, who was out on his morning run shortly before 6 a.m. "To me, it's defacing America. It's not just defacing the Lincoln Memorial, but it's something against all of America."

"People come from all over the world, and to show that they can't get into one of our national landmarks because somebody vandalized it is kind of a black mark on our country," said jogger Keith Gillespie.

The affiliate also noted previous vandalism of the Vietnam memorial wall in 2007.

Posted by MaroonedinMarin at 6:54 AM