I've way past the point of being tired of Karl Rove.

The guy, who has always been touted as "The Architect." The guy liberals were supposed to fear because he's so extreme.

Really? You mean the same "conservative" who attacks Tea Party candidates like Christine O'Donnell?  The same clown who attacks Sarah Palin and Rick Perry on a regular basis? The same fierce Republican who led the RINO attack on Newt Gingrich right before the Florida primary in 2012, because his South Carolina primary win threatened to take out the Rove, RINO establishment anointed candidate Mittens Romney?

Yeah, that guy.  He's always beating up on conservatives and the Tea Party. Kinda like fellow moderates John McLame or Lindsey Grahamnesty.

But take on Obama by defunding Obamacare?  Then Karl the Eunuch shows his yellow streak. No, no, we can't do that, he says. That's a stupid idea. Obama's got the bully pulpit, he and the media will beat us with a stick.

Well, Rove the RINO rides again today.  He and 100 GOP donors (I'm sure the same ones who backed the Romney candidacy in the primary) want to hand Obama a political victory by demanding the House pass amnesty for illegal aliens (Canada Free Press).

The letter’s signatories were organized by Carlos Gutierrez, George W. Bush’s commerce secretary and founder of the “Republicans for Immigration Reform” SuperPAC. You may remember Guitierrez for famously saying that English should not be the official language of the U.S. Government.

Among the letter’s demands is a very specific call to “Take control of our immigration problem by providing a path to legal status for undocumented immigrants who pay penalties and back taxes, pass criminal background checks, and go to the back of the line.”

That the signers are comfortable with the phrase ‘undocumented immigrants’ tells you pretty much everything you need to know about their position.

Like McCain, Graham, and Rubio, Rove and his pals have bought into the bogus notion that amnesty is the only way for the GOP to restore its former glory. Supposedly, the Latino community will suddenly start voting Republican if we just give them what they want. It’s a completely false premise, but that’s what they believe.

The letter is just the first volley in a larger campaign that will stretch through the rest of the summer.

“What tends to happen during the month of August is that members go home and they go to town hall meetings and they check up on their offices in terms of phone calls and letters, and that’s where they get bombarded,” Gutierrez told the New York Times. “Republicans who are for immigration reform — and I believe there are many — we need to make our voice known in August.”

So remember, everyone.  In August, Karl Rove and a whopping 100 elite donors will do everything possible to make sure their opinions on immigration drown out the millions of voters who make up the GOP base. This is exactly why the Republicans can’t win a national election.

So there you have it. Instead of attacking the guy, the Democrats and liberals should be thanking Satan right now for Karl Rove, because if he's the architect of anything, it will be the destruction of the Republican Party's chances in the next Presidential election (and all the ones that follow) when a new slew of Democrat voters are registered.

Which is why Rove is commonly referred to as "Tokyo Rove." 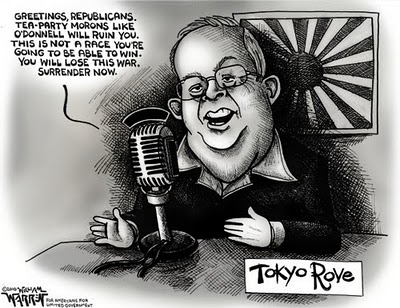 Posted by MaroonedinMarin at 7:03 PM

Can not stand the fucker
MM

Just like Yogi, he thinks he is "smarter than the average bear." His act has warn very then. I don't watch Fox any more because they keep trotting him out to lecture us.