It's not a surprise. They wouldn't use the term "War on Terror" or even call the Ft. Hood jihadist attack an act of terror (it was workplace vandalism.

Now, Richard Milhous Obama is overseeing the surrender of the War on Terror to the Islamic butchers who harbored Osama bin Laden. (CNN).

The Obama administration is considering the possibility of removing all U.S. troops in Afghanistan after the NATO combat mission officially finishes at the end of 2014, White House officials said Tuesday.

The comments by Ben Rhodes, the White House's deputy national security adviser, come as the Pentagon and White House mull over the number of troops that could be left in Afghanistan after 2014 to fight insurgents and train Afghan security forces.

Afghan President Hamid Karzai and President Obama are scheduled to meet on Friday in Washington.

Rhodes said the administration is considering a range of options, with one scenario having no U.S. troops there. The range, according to defense officials, had until recently been between 6,000 to 15,000 U.S. troops possibly remaining in the country, based on an assessment by the U.S. top commander in Afghanistan, Gen. John Allen.

Well, Karzai came to meet with Imam Obama yesterday, and they want to set up an office for the Taliban to have "peace talks" with these Islamonazi savages who would execute women in stadiums for sport. (CNSNews). 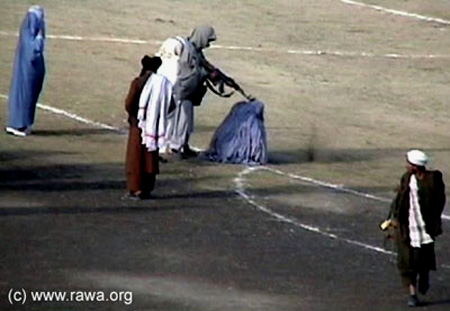 The Taliban, which harbored al Qaeda in Afghanistan in the lead up to the 9/11 attacks on America in 2001, will have an office in Afghanistan and engage in direct talks with the democratic government there, President Barack Obama and Afghan President Hamid Karzai affirmed at a joint White House news conference Friday.

“Ultimately security gains must be matched by political progress, so we’ve recommitted our nations to a reconciliation process between the Afghan government and the Taliban,” Obama said. “President Karzai updated me on the Afghan government’s road map to peace, and today we agreed that this process should be advanced by the opening of a Taliban office to facilitate talks.”

Karzai agreed this would be an important step for the peace process.

“We also agreed on the steps that we should be taking in the peace process, which is of highest priority to Afghanistan,” Karzai said. “We agreed on allowing a Taliban office.”

All while Obama took a swipe at the military for "falling short of the ideal" in Afghanistan (Weekly Standard, via Nice Deb).


In remarks with Afghan president Hamid Karzai at the White House this afternoon, President Barack Obama said the U.S. has fallen “short of the ideal” in Afghanistan:

“So, you know, I think that, have we achieved everything that some might have imagined us achieving in the best of scenarios? Probably not. You know, there’s a human enterprise, and you know, you fall short of the ideal,” said Obama.

To which Nice Deb aptly noted:


Note the use of the royal “we”. When things go bad, it’s a collective, “we” – The United States – all of us, and “you” fell short the ideal- not “I” as when Obama gave the gutsy call to kill Osama Bin Laden. Oh no….things aren’t “optimal” and it’s only going to get worse so it’s “we”.

But it was Obama himself who sealed Afghanistan’s fate when he announced to our peace partners a withdrawal date from the beginning of the surge in late 2009, ensuring that the over 2,000 US combat deaths would be for naught.

Exactly! Everyone of our fallen who sacrificed their lives for the defense of this nation has done so in vain, thanks to this S.O.B. Obama who hates our military and only wants to cut their budget so he can spend more on deadbeats in America who are only going to be sheeple who can be counted on to vote for Democrats every election to keep their gravy train going.

All from the same Obama and Democrap Party (a.k.a. The Party of Treason) who told us how Afghanistan was the war we should be fighting all along.  You "low information" voters bought that lie too? (Ace of Spades, from 2009).


Yes, so I imagined. While Glenn Greenwald, for example, was accusing those on the right of being "chickenhawks" for not serving in Iraq, he was never quite able to explain why he wasn't accumulating Congressional Medals of Honor and Taliban tooth-necklaces in the war he supposedly supported, Afghanistan.

The liberal blog Hullaballoo admits what has been obvious all along.

And no, this isn't just about some seedy, nasty liberal bloggers.

It's about our lying POS POTUS, too.

Escalation is a bad idea. The Democrats backed themselves into defending the idea of Afghanistan being The Good War because they felt they needed to prove their macho bonafides they called for withdrawal from Iraq. Nobody asked too many questions sat the time, including me. But none of us should forget that it was a political strategy, not a serious foreign policy.

There have been many campaign promises "adjusted" since the election. There is no reason that the administration should feel any more bound to what they said about this than all the other committments [sic] it has blithely turned aside in the interest of "pragmatism."

But none of us should forget that it was a political strategy, not a serious foreign policy.

You claimed to support a war in which American soldiers were fighting and dying, leaving friends and limbs on the battlefield, as a cynical political strategy?

You... um... voiced support of a real serious-as-death war to cadge votes out of a duped public?

We won't forget, champ. And we won't let you forget, either.

Posted by MaroonedinMarin at 9:35 AM