Sometimes, I wonder if Colin Powell isn't on the Obama Regime payroll, because he seems to be trotted out on the Sunday shows when the Regime needs him as a reliable "Republican" to attack other Republicans.

As Colon Bowell always does, he cheer leads all of Obama's decisions like a Democrat sheeple, specifically the nomination by Obama of RINO Chuck Hagel as Defense Secretary, today on Meet the Depressed with David Gregory (who really should be in jail, but isn't because he has friends in high places).

But then, Bowell took Jailbird Gregory's bait into attacking the Republican Party as a bunch of bigots. Specifically, calling Obama "lazy" and Sarah Palin using the term "shuck and jive" against That One is RAAAAACIST according to Bowell.

But Bowell has double standard on racism, as he has no problem with Chuck Hagel's anti-Semitic statements, as pointed out at FrontPage Magazine.


“There’s also a dark vein of intolerance in some parts of the party,” Powell said on NBC’s “Meet the Press.” “What do I mean by that? What I mean by that is they still sort of look down on minorities.”

Powell also pointed to former New Hampshire Gov. John Sununu, who was an aggressive surrogate for Mitt Romney, for calling Obama “lazy” after the first debate during the campaign.

Clearly that’s the worst case of racism, since the time someone called Obama “stupid” or “Socialist” or “incompetent” or criticized him in any way.

But conspiracy theories about Jewish control of the government are nothing to take seriously.

GREGORY: You brought up Israel. He referred to a “Jewish lobby,” saying it intimidates a lot of people on Capitol Hill. What kind of thinking does that reflect? Can you understand pro-Israel senators being concerned by that comment?

POWELL: They shouldn’t be that concerned. That term slips out from time to time… Chuck should have said “Israeli lobby,” not “Jewish lobby”–and, perhaps, he needs to write on a blackboard a hundred times, “It is the Israeli lobby.”

Everyone makes a slip sometimes. So long as it’s nothing big. If Hagel had said something truly offensive, like calling Obama lazy, that would be something to be truly concerned about.

Some “slips” are pardonable. Some “slips” are unpardonable. “Lazy” is proof that the entire Republican Party is a bunch of evil racists. Except for Chuck Hagel who isn’t a racist, but thinks the Jews should stop controlling the world.

Never mind that it was the supposedly "bigoted" Republican Party, specifically Ronald Reagan, who brought Colin Bowell into prominence. But Bowell has been angry ever since the end of the second Bush presidency, especially how he was blamed by the liberals for the whole WMDs in Iraq controversy. 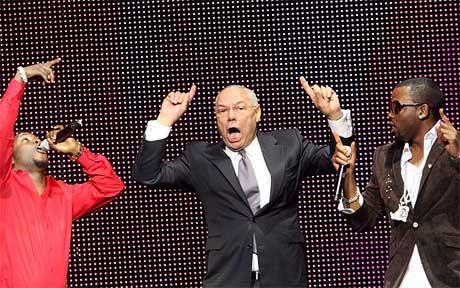 And let's be honest if we want to talk about racism. Isn't is just as racist to vote and support for someone specifically because of their skin color? In that case, that makes Colin Bowell a racist in my book.  Everything Obama has done, Bowell has rubberstamped and supported. Bowell is not a Republican or even a conservative, he's just an opportunist who wants to get back in good standing with other liberal racists like Harry Bellacommie who attacked him in racial terms.  So, backing Obama while bashing the GOP as bigots is his way to make amends to the libs.

Oh, by the way Colin, are you going to call liberal Democrat Andrew Cuomo a RAAAAACIST? In 2008, he used the term "shuck and jive" against Obama.
Posted by MaroonedinMarin at 12:57 PM